Recluse in the Mountains: The Art of Solitude, Defiance in the Landscape Paintings of Hongren

T he recluse, who appears as but a speck within immense mountains, is a revered and ancient concept in classical Chinese paintings. We imagine that the solitary figure making his way across a landscape of rocks and pines might be a scholar-official in exile. We further imagine that such withdrawal from the world at large, taking refuge in a pavilion immersed in wilderness, might be understood as a gesture of resistance – the refusal to participate in the bureaucracy of unenlightened rule.

Collapse of the Ming Dynasty

The 17th century was a period of great turbulence beset by corruption at court, devastating natural disasters, popular uprisings, inexorable Manchu conquest, and the overthrow of the ailing Ming dynasty. To understand the anxiety that confronted the educated elite during this period of historic conflict, it is illuminating to look at the lives of the literati who were both witnesses and participants at the forefront of dynastic upheaval. One of the most interesting figures to have emerged during the downfall of the Ming dynasty is Hongren, among four great monk painters of the early Qing dynasty, a category which also includes Zhu Da, Shitao and Kun Can.


The artist known as Hongren was born with the name Jiang Tao in Shexian, Anhui. He received a classical education, was said to have been an accomplished poet, and passed the prefectural examination which, under normal circumstances, would have put him on the path to a career of civil service. With the fall of the Ming dynasty, he fled Shexian in 1645 when Nanjing came under the control of Qing forces. In Fujian where the Southern Ming prince of Tang set up a stronghold, Jiang Tao joined the resistance army until the loyalist forces were ultimately defeated.

Turning Away From Politics, Embracing a Monastic Life

Scholars suggest that Jiang Tao’s decision to become a monk may have been largely an act of political resistance, one taken by many like-minded scholars of the time to resist the new Manchu rule. However, there are often many forces at work in the murky shadowlands of dynastic change. While it seems to be the case that the downfall of Ming rule was the impetus, Jiang Tao’s decision to become a monk might not be construed as a purely loyalist act. His self-imposed monastic discipline was also strongly motivated by spiritual instinct. He adopted the Buddhist name Hongren (“Vast Humanity”) – styled himself as Wuzhi, also named Jianjiang (“Jian River” from his hometown). Hongren practiced a form of Zen Buddhism under the tutelage of Guhang Daozhou at the famed Wuyi mountains of Fujian.

Hongren spent the remainder of his short life in monasteries in and around the area of his birth. He became an important master of landscapes and the leading artist of the Huangshan, or Anhui, school of painting. As Hongren was a dedicated practitioner of Zen Buddhism, these beliefs form the heart of his work. His painting style is characterized by dry, angular and refined brushwork combined with a near-geometric treatment of form and an architectonic sense of structure. Rocks and mountains are expressed in a sparse and austere style. 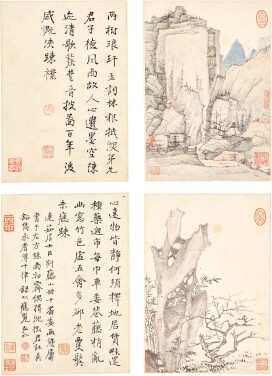 The Duality of Detachment and Desire in Hongren's Landscapes

Within Hongren’s paintings exists a duality that exemplifies the dilemma of the scholar-official during historic upheavals. One aspect expresses the notion of detachment. Chief among Hongren’s stylistic sources are the two great Yuan dynasty masters, Ni Zan and Huang Gongwang, also yimin (leftover subjects) who spent the last reclusive years of their lives engaged in spiritual and artistic pursuits. Hongren’s brush and ink work have distinctive dilute ink and colors tones, reedy dry brush line and preference for crisp, geometric or angular forms – all hallmarks of Ni Zan’s brush style. The unadorned simplicity of Hongren's tree and rock forms, are reminiscent of the purity evoked by Ni Zan's landscapes. The artful juxtaposition and overlapping of angular and rounded forms would be the basis of neat compositional logic in his paintings, derived from the landscapes of Huang Gongwang.

The other aspect of Hongren’s works expresses a sense of yearning. The massive, rectangular mountain forms from the Song dynasty master Fan Kuan’s Travelers among Mountains and Streams recur and echo in Hongren’s landscapes. While Hongren’s monumentalism is distinct from that of the Northern Song, generally regarded as the golden age when classical landscape tradition reached its apogee, a complete literatus would be been conscious and conversant of the full scope of this past, to reference and to innovate upon the tradition. The purpose of Fan Kuan’s monumentalism was to convey the glory of empire, which stands in contradiction with Hongren’s Zen-inflected brush-and-ink work. This paradox of two visual references – to Fan Kuan crossed with Ni Zan – brought together in a seamless aesthetic union suggests Hongren’s longing for a glorious past as well as his retreat from political life.

A World of Solitude Expressing an Internal Landscape

Hongren’s Album of Ten Leaves: Landscapes and Calligraphies perfectly expresses the soul of the literatus in exile. The album consists of nineteen pages – ten small paintings of mountains, trees and stones, and nine pages of calligraphy. The work speaks in a spare, pure language that sustains a transcendent silence, carried forth in the freehand brushwork that minimally evokes craggy hills and valleys devoid of human presence, an extreme pictorial approach that conjures the imposing presence of ancient mountains, and dilute ink and color that offer the bare suggestion of density and shadow. It is a world populated by forlorn pines and lonely boulders. These remote landscapes show the quiet ascendency of empty rivers and still spaces, referencing ancient ideas while also reworking them in a radical, near-empty minimalism. As the sublime stillness descends, the lonely images present not an elegy but an exaltation of silence – one that has less to do with any actual form created by nature, than it has to do with a more internal landscape.

According the Hongren’s inscription on the Album of Ten Leaves, he created this work at the request of a friend named Lianru, who asked the artist not only to paint ten landscapes but also to juxtapose them with companion pages of calligraphy. The album is rare for many reasons; among them is the fact that it is highly unusual to see so much of this artist’s calligraphy in a single work. In response to his friend’s request, Hongren wrote the poetry of Shen Zhou in elegant kaishu regular script, and occasionally with xingshu running script. Hongren was an accomplished poet in his own right. Why did he choose the poems of a Ming dynasty scholar?

The Spirit of Literati in Exile

Shen Zhou was a master of many schools of painting but ultimately created his own unique style and became the founder of the Wu School. In his poetry and his paintings Shen Zhou captures the interior world of the literary imagination. He led a life of self-imposed retirement having rejected an official career. It is tempting to imagine that Hongren must have felt an affinity based on these parallels alone. If so, the artist makes no mention of it, expressing an appreciation for the “open expressiveness” and “enduring value” of these poems. Alternative deeper reasons for Hongren’s selection – based on personal or political parallels between the two artists – remain open to interpretation.

What is apparent and deeply moving about the work is the consummate compatibility of spirit. Shen Zhou’s poetry finds its perfect articulation expressed through Hongren’s brush, presenting solitude as high art. The paintings were never intended as a pictorial illustration to mirror the narrative content of the poems; together they have an undeniable thematic resonance that blur the distinction between painting and poetry to manifest the internal landscape of the artist. 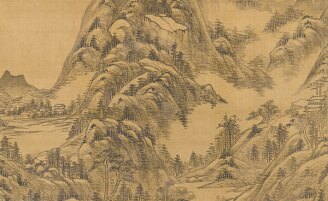