By Elizabeth Choi
A Qing dynasty manuscript of a poem offers a momentary glimpse at the Qianlong Emperor – not as an imperial ruler and military leader, but as an attentive father.

A s the Hong Kong Autumn Sales approach in October, the upcoming Fine Classical Chinese Paintings auction presents many important and fascinating paintings spanning over ten centuries. Included in the highlights of the sale is a fascinating manuscript of a poem written by the Qianlong Emperor’s first-born son, Yonghuang. The manuscript is notable for the fact that Yonghuang died at the young age of 23, leaving behind very few records or works. Even more curious is the fact that the manuscript contains exceedingly rare corrections in red by the Emperor Qianlong himself.

It is a momentary if not singular look at the storied Emperor, not as the long-reigning imperial ruler and not as the capable military leader for which is known in history books – but as the father of a young prince.

In this work, the Emperor’s son composes a poem modeled on a rhyme written by his father. One section of Yonghuang’s poem contains the line: “How many people have reached the paradise of immortals?”

“How is this line befitting of a crown prince?” the Emperor Qianlong comments in red. It appears the Emperor is urging his son to think more practically or warning him against indulging in superstitions. Elsewhere, the Qianlong Emperor balances criticism with subtle praise for Yonghuang’s composition, suggesting the high standards to which the Emperor held his first-born son.

This coincides rather seamlessly with the signature markers of China’s last dynasty, which was known for placing considerable importance on education, especially in areas of history, policy, poetry, calligraphy and painting. The princes of the Qing dynasty were groomed for imperial rule with knowledge based on historical observation as well as a profound appreciation of art and culture. As such, it may come as no surprise that the Qing dynasty emperors regarded their successors with exceedingly high expectations, akin to what is today called “tiger parenting.”

As Qianlong comments on the abstract nature of his son’s composition, in his own writings he expounds quite literally of the duties of being an emperor. Qianlong wrote more than 42,000 poems in his lifetime. Of these writing, Side Lun (Discourse on the Four Blessings) and Side Xulun (Continued Discourse on the Four Blessings) appeared to be the most important essays for his 80th birthday. According to the Emperor, these discourses were “a form of self-admonishment” in which he reasserts the accomplishments of his life while being careful to note, throughout several works, that the desire to carry out his duties indeed fuels his competency as emperor. He would later have this collection of writings commissioned to be published and distributed to princes, students and officials for careful study.

Aside from matters of state and imperial responsibilities, the Qianlong Emperor also wrote poems about love and loss, which offer more intimate insight and further fleshes out this historic figure as a parent and a husband. As one of China’s longest ruling emperors, Qianlong experienced many life-altering events. The Emperor had several empresses as well as a bevy of consorts and concubines with whom he sired many children in an attempt to secure the future of the Qing line. However, of the seventeen sons he fathered, only four survived, including the sons born to him by the first Empress Xiaoxian.

It is clear the loss of Empress Xiaoxian in 1748 had a profound impact on the Emperor. Wrought by the deaths of first his favoured son and then the beloved Empress one year later, Qianlong produced more than 100 poems lamenting Xiaoxian’s passing, with the last one dating nearly 40 years after her death and just one year before his own passing.

The depth of his grief may explain why the Emperor’s treatment of Yonghuang was particularly harsh. He regarded Yonghuang’s stoicism as an inadequate expression of mourning, unbefitting the death of the Empress. The Emperor came down hard on his first-born son, and as punishment, Yonghuang was removed from the Emperor’s list of potential successors.

Less than two years later, Yonghuang passed away. In his later years, the Emperor came to regret the decision to remove his eldest son’s designation, and he posthumuously bestowed upon Yonghuang the title of Prince Ding’an of the First Rank. In each of these events, it seems clear that while Qianlong tried to fulfill his duties as the Emperor, he was not without feeling and empathy as a father.

This makes sense when looking back just a few generations. Before Prince Hongli ascended the throne to become the Qianlong Emperor, he had an incredibly strong relationship with his father, the Yongzheng Emperor, and his grandfather the Kangxi Emperor. Both lavished attention on the young Prince Hongli from an early age while also instilling the importance of filial piety. Just as Yongzheng was actively nurtured and groomed by the Kangxi Emperor, Qianlong would have seen fit to instill in his heirs the same observations and lessons gleaned from his father and grandfather.

Although it may be just a fleeting glimpse into an intimate part the Emperor’s life, this special manuscript by Yonghuang suggests something intriguing about the Qianlong Emperor’s parenting style and his character as a father in light of the many personal tribulations and dynastic responsibilities. 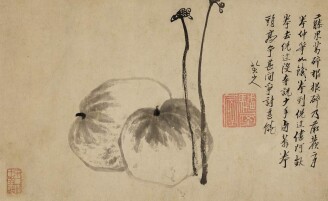