W hen Plum Sykes and her sister Lucy came to the US in the mid-90s, the Portobello princesses quickly became fixtures in New York society. With English style and wit, the twins continue to charm the worlds of fashion, journalism and literature. Currently a New York Times best-selling author and contributor to American Vogue (this April will mark her 20th anniversary at the magazine), Plum is set to release her latest book and soon to be series, Party Girls Die in Pearls (HarperCollins) this May. Part chick lit, murder mystery and autobiography, the novel follows the experiences of two new best friends, the modest, English country Ursula and the impossibly chic American Nancy, at Oxford University in the 1980s. Sotheby’s couldn’t wait to talk to Sykes, now living with her husband and two daughters between London and the Cotswolds, about British versus American style, her penchant for depicting high society and her taste in jewellery. Read on to discover more about Sykes, including her favourite pieces from Sotheby’s Magnificent Jewels sale on 25 April in New York.

Where did your love of fashion begin?
My mother designed very classic English children’s clothes, so from a very young age, I was being dressed by her in beautiful, smart dresses. Around age eleven, I used to make a lot of my clothes with my grandmother. I remember as a sixteen, seventeen-year-old, my mom would get her seamstresses to make little ball gowns for me if I was going to a deb party or something like that. Although we didn’t have any money at all, we had access to lots of fabrics and seamstresses, so we looked quite glamorous.

To what extent does the book draw from your personal experience as a student at Oxford in the 1980s? Do you most identify with Ursula’s character?
Yes, and it's the most autobiographical of all. Funny enough, about four years ago, I wrote this non-fiction memoir about my first term at Oxford for an Amazon website called Kindle Singles. Then my agent got lots of people saying I should turn it into a novel. So by the time I started writing Party Girls Die in Pearls, I had already decided it was going to be highly autobiographical. Obviously not everything that happened to Ursula happened to me, but the feelings that she had when going to those parties or that coming of age moment when she first arrived at college are feelings that I very much had.

You went to Oxford in 1988. Why set the book earlier in the decade?
When I was at Oxford, the style was becoming more ’90s and grungy, so the really ’80s styles, like the great shoulder pads and the gold lamé, were going out of fashion. Earlier in the ’80s, Oxford was ultra sloaney and glamorous. It was all about Lady Diana and Brideshead Revisited. I’d rather set the book in a really entrenched ’80s moment than the tail end of it. I also wanted to write a murder mystery that wasn’t bogged down with technical details. DNA testing didn’t come into common use in America and England not really till the late ’80s/early ’90s. It was still considered unreliable, and I didn’t want to write a novel where anyone might think, “Well why didn’t they just get some DNA?” I love procedural crimes, but I didn’t want to write one. I wanted to write something that was more in the vein of classic detective mystery, Agatha Christie, P.D. James.

Your novels often have a strong style component. Do you believe clothes make the character?
In this book, the two main characters’ wardrobes are part of their identities. At the beginning, Ursula, dresses rather sweetly in her tweed jacket, tights and loafers. She’s a little bit what we would call “square,” but the more party dresses she wears, the more she comes out of herself. Nancy, who is your energetic American, is very much wearing the absolute trendiest things – stretchy, clubby clothes New Yorkers would wear at the time. It makes it really easy to distinguish between these two best friends who are very different but have lots in common emotionally and spiritually.

SYKES’S BOOK, PARTY GIRLS DIE IN PEARLS (HARPERCOLLINS), TO BE RELEASED THIS MAY. COVER BY DONALD ROBERTSON.

How would you compare British versus American style in the 1980s and today?
Fashion is completely global now. Eighteen-year-olds on both sides of the pond both want the same Erdem dress or Topshop mini skirt. Then, styles in America and England were much more different. You were Calvin Klein, and we were Christian Lacroix. Although Halston was obviously more of a ’70s designer, he really influenced the ’80s in America. ’80s American style was still very lavish, but it was sportier than English style, which was kind of rococo.

Would you compare your own fashion awakening upon moving to New York City to Ursula’s when she encounters Nancy’s bold ensembles?
When I moved to New York, I was very much the Portobello Princess, if you like. I remember going to the office wearing a vintage nightie and a rose in my hair, and all the girls were wearing Helmut Lang suits. I dressed in a romantic, English garden party way, and they dressed in a more architectural, structured, clean lines kind of way, which I always associate with New York. That was a real education for me, and when Ursula first sees Nancy’s dressing up wardrobe, she’s amazed and wide-eyed because it’s so glamorous and sophisticated. They don’t always have as much whimsy or originality as a really chic English girl, but boy, have New Yorkers got sophistication.

But eventually you and your sister made names for yourselves here. Do you think that was because of your British sensibility?
I think the fact that we were twins, and we were kind of a double act made us interesting to people. We were young and pretty with English accents and both had jobs at fabulous magazines. It was a great story for the press. Lucy was on Harper’s Bazaar and I was on Vogue, so it was like the Oxford and Cambridge of the fashion world. We were in a different dress every night, we had good fun, and everyone loved that.

What separates socialite style from the rest?
I always felt those socialite girls had a whole other level of sophistication that an English girl the same age might not have. Whether it was someone like Aerin Lauder then or Lauren Santo Domingo now, they have been trained in the art of dressing since they were probably teenagers.

"They don’t always have as much whimsy or originality as a really chic English girl, but boy, have New Yorkers got sophistication."

How would describe your personal taste?
Now being a mother, it’s obviously changed quite a bit. It’s less English than it used to be because once you become a mother, and you still want to look chic, the American way of dressing and the simplicity of American sportswear are better for mums. A great pair of black pants, a white shirt and ballet flats, which to me is a very American look, is much better for a mum than a pencil skirt and a pair of high heels.

Does this match your taste in jewellery? Many of the pieces you chose were highly decorative.
I felt like I was picking jewels that were very much like the jewels Nancy might have borrowed from her mother: a big diamond necklace or a great pearl necklace. In the daytime, I tend to wear something simple in my ears, like little gold hoops, and my engagement ring. But in the evening, the more decorative, the better.

It must have been fun to shop the sale then?
Oh my god, it was so fun. I wish I was shopping it for real. My husband bought me the most amazing, original Boucheron brooch from Sotheby’s. It almost looks like a fountain spray, very abstract with baguette diamonds. I wear it a lot it actually, and you can pin it on your shoulder, or on your waist, and it breaks into two clips as well. I love brooches. I got into them because I wrote an article for American Vogue about how chic they were and how to wear them.

Do you have a jewels motto?
If you’re taking a very simple wardrobe when you’re travelling, it’s always good to take some real jewellery with you. With a simple black dress or white shirt or whatever, a lovely pair of diamond studs or an emerald ring really does add a touch of glamour that makes life more exciting. When I travel, I have a tiny, soft Chanel jewellery case, the size of a little cube. It fits about four or five pieces, and I always take it with me, even if just from the country to London. 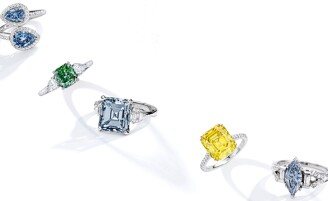