B enjamin Paulin and Alice Lemoine are both as passionate when talking about about Pierre Paulin as each other. When Benjamin begins a sentence, Alice finishes it. And vice versa. This is not surprising perhaps for Pierre Paulin’s son, but for his wife, the famous designer’s work is no less familiar: her mother worked for him as a colourist in the 1970s.

In their homes, as teenagers, the couple grew up naturally surrounded by iconic furniture. However, as adults, they both threw themselves into careers that had little to do with design. Benjamin sang in a band, and then solo, whilst Alice worked in fashion. “But at the birth of our first daughter, we felt the need to refocus our couple and find a unifying project.” This would turn out to be the promotion of Pierre Paulin’s work. The designer was fading and died on June 13 2009 at the age of 81. After international success, he became unfashionable in the 1990s.

This left him deeply sad, but despite this, he did not stop creating. He also devoted himself to his great work, his house in the Cévennes, for which he created the entire architecture and interior design as well as the layout of the garden. Like a manifesto. In the 2000s, he did however experience a comeback, generated by the return of a taste for seventies fashion. Unfortunately, he witnessed little of his regained notoriety.

His widow, Maïa, did much for the rediscovery of her husband’s work and she can now rely upon her son and his wife to help her. The company is named Paulin Paulin Paulin; “It was a bit of a joke to begin with, a wink at American firms, we don’t take ourselves too seriously in the family, but in the end, it suits us well: there are three of us and the echoing name renders the idea of transmission.”

Their aim is to promote Pierre Paulin’s ingenuity across the world by organising exhibitions and producing pieces that were never made during his lifetime; often for commercial reasons. “We like to tell a story, explains Benjamin. Make his dream projects exist. We are not interested in a commercial approach.” Alice adds “We are outside a format. We began our activity as producers without really wanting to. These creations were made firstly as a means of communicating, but people wanted to own them…”

Just like their precious sponsor passionate about design and present from the beginning of the adventure, Azzedine Alaïa. He commissioned several pieces. Then, in 2014, Louis Vuitton presented prototypes made by Paulin Paulin Paulin! at the Miami Art Fair. The Jeux de forms series revived the project for a modular habitat imagined in 1972, but which had never been produced. “Pierre Paulin’s biggest regret”, according to Maïa.

The following year, the famous art dealer Emmanuel Perrotin staged an exhibition which harmoniously brought together artworks and designer furniture. Finally, the consecration was complete when the Centre Pompidou gave Pierre Paulin a retrospective exhibition in 2016, presenting over 70 pieces including icons from the history of design such as Tulip, Ribbon, Mushroom, Butterfly…. An entire era emerged.

In 1971 Georges and Claude Pompidou entrusted Pierre Paulin with the design of their private apartment at the Elysée. “My father entered the MoMA in the 1960s. This is where Jean Coural, the administrator of Mobilier National discovered him in 1966-67! Fascinated by this French designer so famous in the United States, he mentioned him to the president.” Alice explains: “He designed Marc Bohan’s office at Dior at the same period, and the fashion designer was close to Madame Pompidou… all this chimed together.”

Almost fifty years later, the dining room is still there… “The rest was taken down by Valéry Giscard d’Estaing”, explains Benjamin. However, Pierre Paulin once more entered the Elysée in 1984. He designed François Mitterand’s office. “The structure is in lacquered wood, covered in leather. My father thus revived a certain idea of classicism and skill. It is a unique piece. There was also a chest of drawers and a bench seat. It must all now be at the Mobilier National.”

Visitors to the Centre Pompidou exhibition also discovered hitherto unseen pieces such as the Tapis-siège, a prototype made for his house in the 5th district. A very low seat, whose four corners can be raised to create a back. There was also La Déclive, a bench seat in undulating line that the couple still produce with success. They also produce the Dune ensemble, several modules that combine to produce infinitely variable seats. This concept was created in 1972 and is starting to become a cult. Proof that the designer was ahead of his times. “But we have not simply become a company that produces the same pieces” Alice is careful to explain. “We do not have a business plan. Everything is handmade. We have a passionate family link with Pierre Paulin’s work and our driving force is to bring it alive through specific projects.”

The exhibition they have recently organised in Floirac, near Bordeaux in Alice’s family home proves this. As her parents shared Pierre Paulin’s taste for modernity: they asked Rem Koolhaas to design their house. Completed in 1998 after years of work, it is considered to be one of the star architect’s masterpieces and is classified Historic Monuments since 2002. “They admired each other a lot” Alice remembers. “So we had this crazy idea to ask Rem if he would accept to design the layout of the exhibition devoted to Pierre Paulin. And he accepted.”

The couple produced the Dune ensemble on a scale for the house, and also a Tapis-siège, a C sofa, Déclive seats, bookshelves… A little naively, Benjamin and Alice begin to organise visits of the place, but a few photos posted on Instagram triggered almost a thousand requests. An enthusiasm which means they cannot communicate in the press “So as not to create any frustration.”

Fortunately, an amateur managed to slip into the incredible house and came out captivated. This was Florent Jeanniard, director of Sotheby’s design department. “I had been thinking about it for a while: after Pierre Cardin and Diego Giacometti, to show Pierre Paulin opposite the Elysée…. I had talked about it with Benjamin and Alice, and when I saw what they had done in Bordeaux, I was astounded. So I decided to show part of this project, associated with vintage pieces, lent by galleries and collectors.” Not forgetting those belonging to the couple. “We are the first people to buy, in order to then loan and facilitate exhibitions.” Benjamin and Alice have just come back from Korea, after traveling to Australia and South Africa, spreading the word. Pierre Paulin could not have dreamt of better and more ardent ambassadors. 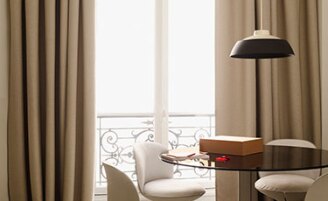