With the ability to transform from a glass pavilion to a snug cottage, Paul Rudolph’s Walker Guest House is a landmark of mid-century design.

Paul Rudolph and the Dynamic Genius of The Walker Guest House

W hen Walter Walker, a doctor from the prosperous Minnesota family that had founded the Walker Art Center in Minneapolis, decided in 1951 to purchase land on Sanibel Island off the west coast of Florida, creating an architectural monument was not what he had in mind. Walker sought quiet, which Sanibel, then largely undeveloped, offered. If he was inclined towards Modernism, he was even more inclined towards simplicity and economy, and he rejected the initial design his architects, Ralph Twitchell and Paul Rudolph, proposed. It was too big, too elaborate, Walker thought, and he worried that the large plate-glass windows that were facing the Gulf of Mexico would pose a risk in the frequent hurricanes that crossed Sanibel.

The design was largely the work of Rudolph, who soon left Twitchell and began a practice of his own that would lead to a series of small houses in Florida that are now considered among the major achievements of mid-century Modernism. Later, Rudolph would become the head of the school of architecture at Yale, and the designer of some of the most notable public buildings of the 1960s and 70s, including the Yale Art and Architecture building and the University of Massachusetts at Dartmouth. Back then, however, Rudolph was just a young architect in search of work for his newly independent office, and he went back to Walker and asked if he would be willing to consider something else altogether for the site: a more modest project in a corner of the beachfront property, which could serve as a guesthouse if he decided someday to revive the plan to build a large main house. 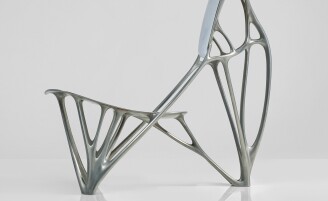 The idea of starting out on a more modest scale appealed to Walker, who, as Brandt Dayton, who is married to one of Walker’s stepdaughters, wrote recently, may well have thought that a small guesthouse would be “a better place to start the experiment of living in such an incredibly isolated location”. Walker gave Rudolph a budget of $15,000 and agreed to go ahead as soon as Rudolph presented his design. The guesthouse he proposed was a small, light pavilion, mostly of glass, roughly 25 ft square. What made it more than a simple box, however, was Rudolph’s brilliant notion of placing 12 large panels, three on each side, that were hinged at the top like flaps, so that when closed they would make the house private and offer protection from severe weather; when open, they would provide a roof for the decks surrounding the house, offering shade. Rudolph devised a pulley system using cannonballs to serve as counterweights for the panels, which could be easily raised or lowered, or left in an in-between state to allow for a blend of privacy and openness to the breezes.

The structure was symmetrical, with the square divided into four quadrants: a living room, a dining area, a single bedroom and a quadrant shared by a kitchen and bath. The house appeared larger, however, because the surrounding decks were enclosed in a simple frame, its vertical columns giving the structure the sense of being almost like a small, tensile version of a Greek temple. The Walker Guest House was modern in that it demonstrated Rudolph’s interest in light forms and flowing space, as well as his fondness for technology and for intricate, neatly wrought structural systems, and yet it was traditional in its symmetry and in its purity. The plan of the square house and the projecting flaps resembled a Greek cross, showing, the architecture historian Timothy Rohan has written, “Rudolph’s already evident and growing appreciation for the idealised geometric forms that had inspired classical architecture over the centuries,” and prefiguring the interest in creating a Modern form of monumentality that would preoccupy him later in his career.

The Walker Guest House was roughly contemporary with both Mies van der Rohe’s Farnsworth House and Philip Johnson’s Glass House, and if it was simpler and less expensively built than either of these, not to say more casual in its bearing, it was also, in its own way, more advanced. Mies and Johnson’s houses are static and unchanging; Rudolph’s could be changed into multiple configurations. It provided, in effect, an answer to the criticism of the International Style’s obsessive transparency, not by turning inward, but by offering its occupants the option of changing the configuration of the flaps.

“With all the panels lowered the house is a snug cottage, but when the panels are raised it becomes a large screened pavilion,” Rudolph has said. “If you desire to retire from the world you have a cave, but when you feel good there is the joy of an open pavilion.”

It was modern in that it demonstrated Rudolph’s interest in flowing space, and yet traditional in its symmetry and purity.

Walt Walker and his family eventually did build a larger house – his second wife liked the Rudolph house more than the woman to whom he was married when he built it, and his stepchildren visited frequently enough to require additional sleeping space – but for whatever reason, he did not pursue as ambitious an agenda the second time around. He and his family remained devoted to the Guest House, however, and they continued to occupy it until the death of his wife, Elaine, in the autumn of 2018. (Walker died in 2001, at age 90.)

They also maintained the house, widely considered the most important of the group of houses Rudolph designed in Florida in the 1950s, with only minimal changes. Elaine Walker painted some of the interior, finding Rudolph’s original design a bit too monochromatic, and she recovered some of the original furniture, but the family kept all of the furnishings Rudolph had chosen and even preserved Rudolph’s drawings. It is the rare Rudolph house to have never left its original ownership, or to not have undergone significant renovation.

After Elaine’s death, Elaine and Walt Walker’s heirs offered the entire Sanibel property for sale. It was their distress at discovering that potential buyers were inclined to demolish the Walker Guest House that led the family to approach Jodi Pollack, Sotheby’s co-worldwide head, 20th-century design, to ask for advice on how best to preserve the house that, after the Walker Art Center, is one of the larger Walker Family’s most celebrated, if inadvertent, connections to artistic patronage.

“Logistically, we determined that the house is absolutely movable,” Pollack said, “and in the interest of preservation, we decided that the best thing to do would be to sell it to a new owner, who will move the house off Sanibel Island, and become the house’s next steward.” If the Walker Guest House could not be preserved in situ, the next best thing, they decided, would be to sell it to someone who would give it a new life somewhere else. It will almost surely leave Sanibel Island, but the trade-off will be knowing that one of the most important designs by one of the 20th century’s most important architects – one that, by its nature, is not specific to its site, and could be set down almost anywhere – will be preserved; a Paul Rudolph mid-century masterwork available for generations to come.

Paul Rudolph’s Walker Guest House will be offered in the Important Design auction on 12 December in New York. Enquiries: +1 212 606 7170