“I had a decisive experience in Martinique. It was only there that I felt like my real self and one must look for me in the works I brought back,” writes Paul Gauguin, an artist who was drawn to exoticism of all kinds. Always eager for new experiences, his letters to his wife and friends were filled with notions of travel and exploration. The first journey to the island of Martinique was precipitated by the harsh conditions in which Gauguin found himself in 1887. Financially insecure and estranged from his wife, Gauguin was convinced that a bright future lay ahead of him in Panama.

Accompanied by his friend Charles Laval, the pair sailed toward the Americas in April, briefly stopping on Martinique before continuing their voyage. Unfortunately for Gauguin, Panama’s purported charms were illusory; he and Laval decided to return to Martinique not long after they’d arrived. Gauguin’s return to the Caribbean island in June 1887 marks the beginning of his extraordinary association with the tropics. Martinique made a powerful impression on his art, as well as his sense of identity. The sixteen canvases and numerous drawings he brought back to France heralded a new direction in his work.

Chemin sous les palmiers represents an enchanting vision of the artist’s life-long interest in depicting the unfamiliar. Part of a series of works Gauguin completed on his trip to the Caribbean island, where the artist stayed from June until November 1887, the present work evokes the beauty and visual splendor of the tropics.

When he returned to the bustling metropolis of Paris, after several months in Martinique, Gauguin fantasized about his experiences abroad and yearned to set out again for another tropic locale. Returning to the Breton communities of Northern France, Gauguin continued to focus on outdoor figural scenes, while developing his Post-Impressionist aesthetic of bold, saturated colors and flat forms. The artist's unmatched ability to create a harmony of form and color that is both lyrical in its fluidity and revolutionary in its palette is already evident in his Martinique works and would continue to develop throughout the 1890s when the artist once again took to the tropics to record some of his most celebrated canvases. 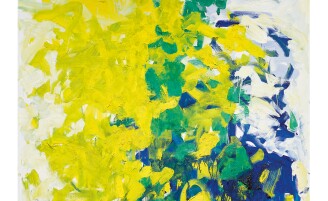