Ahead of the upcoming Unwrapped, Part I: The Hidden World of Christo and Jeanne-Claude sale, Bernar Venet, an artist renowned for his bold, geometric steel structures, recounts his lifelong friendship with Christo. Both Parisian “by adoption”, they met in New York in the 1960s. A number of works by Venet, belonging to the Bulgarian artist who died in May 2020, are included in the auction.

Annick Colonna-Césari: How did you get to know Christo?

Bernar Venet: I remember crossing paths with him one day in Paris at the Sonnabend gallery, without speaking to him. On the other hand, he was the first person I called when I arrived in New York in 1966. Arman, who had been living there for some time, had given me his number as well as that of Roy Lichtenstein. I started with Christo because I was familiar with his work and because at the time I was reading Pierre Restany's work on the Nouveaux Réalistes (New Realists), whom he had joined. I arrived on April 1st and on the 3rd, a Sunday afternoon, I knocked on his door. He and Jeanne-Claude, his wife, were living in an old building south of SoHo. I was 24 years old, Christo 31. He was already a star, even if he was still in the early stages of his career.

And did you hit it off right away?

We had a lot in common. I talked to him about the Nouveaux Réalistes, who were my friends. The fact that we were in a foreign country, whose language we didn't speak very well, also brought us closer. And we were both immigrants. Christo had fled communist Bulgaria, hidden in a wagon under a blanket. I had left France because I didn't feel like I belonged there. I was continuing my abstract paintings, which I covered with tar, at a time when figuration was making a big comeback, alongside Nouveau Réalisme (New Realism), which didn't suit me either. In fact, Christo and I shared the same objective: achieving something in the United States.

What kind of man was he?

Generous. He and Jeanne-Claude often invited me to dinner. In the beginning, we were content with a plate of pasta and I was happy, I, who didn't have a penny. On several occasions, he lent me money to pay my rent. And each time, he refused to be reimbursed. In exchange, he would choose a work from my studio. But I learned so much by spending time with him! Not in terms of creation because our work was very different. At the time that we met, he was always wrapping objects, in the spirit of Nouveau Réalisme. As for me, in the middle of my conceptual period, I was drawing mathematical diagrams on my canvases...

What I particularly admired was his discipline. His life and that of his wife were dedicated to art, especially when they began developing their monumental projects. It was he who conceived them. And the proceeds from the sale of his drawings were reinvested in their financing, since he did not want to be dependent on a gallery. As for Jeanne-Claude, she was in charge of organizational and legal matters. Getting up at four in the morning, she would call China, Japan, Europe, and then go back to bed until noon, while Christo was locked up in his studio. At 6:30 pm, they would go out to attend exhibition openings.

And your friendship endured...

When I was a young artist, he supported me. During dinners, he introduced me to critics, curators, collectors. As early as 1971, the New York Cultural Center devoted a retrospective to my work, which of course he came to see. Yes, we were really close. In fact, the day my twins were born, he and Jeanne-Claude arrived at the hospital at the same time as I did! Later on, we saw each other less frequently. We were both overwhelmed by our respective activities. In spite of that, our strong connection never lessened. I have photos of him in the Var, when he would come to visit me in Le Muy. The last time we had dinner together was a year ago, in New York.

Yes, especially at his dinners. When the meal was over, his guests would follow him to the studio to discover his drawings, which he would thus sell directly to collectors. And he would talk about the obstacles he faced. An eternal optimist, he would do everything that had to be done to overcome them. He used his contacts to get appointments, traveled to talk to local residents, and surrounded himself with lawyers. After Jeanne-Claude's death in 2009, he continued his activity with his nephew.

He regretted not having been able to raise his Mastaba in Abu Dhabi or to deploy Over the River, ten kilometers of canvas to hang suspended over the Arkansas River, in Colorado. Yet he believed it to be possible. He was, however, quite surprised when his 1961 project of wrapping the Arc de Triomphe resurfaced two or three years ago at the same moment that the exhibition of his work at the Centre Pompidou was being scheduled...

Do you think it should still be done, now that he is no longer with us?

Of course! In recent years, Paris has regained its position as a major international art capital as much through its museum exhibitions as its galleries. This achievement would enrich its prestige, would have a worldwide resonance as in the days of the wrapping of the Pont Neuf or the Reichstag in Berlin. And the State would thus keep its promise to Christo, and pay tribute to his and Jeanne-Claude’s work. Showing that art is not just for wealthy collectors, but that it is aimed at a broad public - an idea that Christo and Jeanne-Claude always defended. 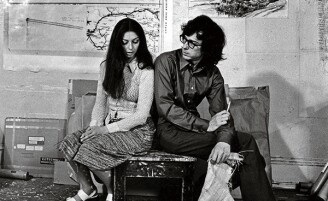