By Sotheby's
The Marina Picasso collection of prints gives the collector an opportunity to examine the creative processes of her grandfather, Pablo Picasso, as he continued to push the frontiers of creativity throughout his life. His exploration of established printmaking techniques combined with an inquisitive exploration of new techniques, including the adoption of new technology, has created a remarkable collection, part of which is offered in this auction .

P icasso did not make prints in isolation, they were not only an integral part of his artistic practice, but they reflected what was happening in his life, in his household, friendships and lovers. As Picasso told Tériade “The work that one does is a way of keeping a diary”. They cannot be separated out from his personality, from his persona. John Richardson has suggested that when the artist entered into a new relationship, he started experimenting with new ways of expression, and this is reflected in his printmaking.

In 1930 Picasso purchased a small château in Boisgeloup and installed the printing press that he had bought from Louis Fort. It was there that he began to experiment with printing a series of etchings of Bathers. From these experiments (see Ba. 268, 262 and 281) it is possible to follow his process as well as see some of the results that were less successful. The advantage of Picasso printing these etchings himself, is that he saved the results of his experimentation. A professional printer would have discarded the printings that they regarded as mistakes, whereas Picasso used the “unexpected” results to push the boundaries still further and transform the image.

The subject of Bathers has been closely associated with his newly established mistress Marie-Thèrese Walter. These subjects may have been a reaction to an incident in 1932 when she contracted a potentially lethal virus while swimming in the Marne. Seriously ill, Marie-Thèrese was in hospital and then spent several months convalescing, leaving Picasso alone at Boisgeloup haunted by the fear that he would lose her. This obsession with Marie-Thèrese was channelled into his creative output in sculpture, painting and printmaking.

At this time Picasso made his only “Erwinograph” (see Ba. 572bis). This complicated process was invented by Erwin Quedenfelt in early 1920’s Vienna and required a special formula of gelatin that was only sold under patent. It is a mystery how Picasso obtained the gelatin, but it provides another example of his radical curiosity in printmaking techniques. He did not pursue the technique and therefore examples remain extremely rare.

It was not only love and passion that inspired Picasso, the works of poets and writers provided the catalyst for many subjects. Jaime Sabartés maintained a special position in Picasso’s life. Apart from being the artist’s long-standing secretary, his friend and confidante, Sabartés was also a fellow Catalan and often the butt of Picasso’s jokes. Ba. 965 and 968 are aquatints from an unpublished book, Histoire de Sebartés et sa Voisine. These playful designs show a naked Sebartés making amorous advances on his neighbours. Sabartés and Picasso shared a Catalan sense of humour that emphasised masculine eroticism and penile jokes. The book was never published, but the aquatints show continued experimentation with the technique as well as a witty evocation of his old friend at home courting the ladies.

The sale also includes two rare linocuts (Ba. 1037 and 1327) that were never published. Femmes à leur toilette, 1956, a “rinsed” linocut where the artist has manipulated the ink over the printed image to create a unique version of the subject, and Femme nue pêchant des truites à la main, 1962, a lyrical linocut that Picasso continued to rework the following year. The rework substantially changed the subject and the linocut was never published.

There is also a group of five linocuts printed in shades of pearl grey for Portrait d’homme, 1966, (Ba. 1848). The published edition is “rinsed” with india ink that clearly defines the subject, but these unrinsed impressions were probably waiting to be “rinsed” and yet, as unrinsed linocuts, they still have a power of their own.

This small group of works by Pablo Picasso in the current auction from his granddaughter’s collection, remind the collector that each of the artist’s prints result from a series of trials and experiments at the very centre of the artist’s creative process. 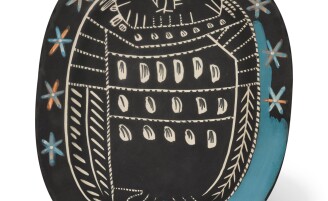