I'm not from Earth originally; I'm from outer space. If I ever had the opportunity, I would have explored the outer space.

Hsiao Chin is the essential explorer and pioneer. As an artist, his body of work and life experience serves as a conduit, tracing a journey through the development of 20th century art and linking Asia, Europe, and America. As Hsiao says, he is "not from Earth originally," which makes sense, as the artist had never been rooted to any one place. His career is a thread extending through the modern and post-war art world, and his brilliant achievements are revelations in the varied and tightly interconnected artistic movements of the last century.

Born in Shanghai in 1935, Hsiao Chin moved to Taiwan in 1949 as part of an exodus of artistic talent from mainland China. In 1952, Hsiao joined the studio of Li Chun-shan, who emphasized techniques that were directly influenced by Léonard Tsugouharu Foujita. The eight artists under Li’s tutelage made up Ton Fan, one of the two main post-war Chinese art groups, whose bold style earned them the name the “Eight Great Outlaws” due to their opposition to cultural orthodoxy. The two groups, Ton Fan and Fifth Moon, challenged the art establishment by asserting provocative new theories. These ideas reflected the collisions between artists from mainland China and Taiwan, and advocated iconoclasm against what many viewed as an oppressive conservatism imposed by Taiwan’s provincial art exhibition. However, Ton Fan did not set traditional Chinese painting in opposition to modern art, but in fact saw them as fundamentally similar with traditional painting as a source of innovation.

Hsiao had received a scholarship to study in Madrid, but found the local art academies stodgy and conservative. Like many who were part of the second great wave of Chinese artists flocking to Europe 1950s, Hsiao was most interested in the exchange of avant-garde ideas in an open environment with the aim of injecting new life into Eastern art. So he forwent his scholarship, moved around Europe, and finally in 1959, settled in Milan. Hsiao met Catalan abstract artist Antoni Tàpies and turned his focus to French Lyrical Abstraction. He wrote articles bringing news of European avant-garde art to Taiwan, and he organized exhibitions in Europe and America for the Ton Fan Group and other Chinese artists of his generation. 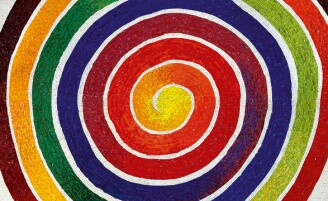 As the Cold War divided the world between two superpowers, it saw Chinese society in both the mainland and Taiwan closing off. As a result, Hsiao Chin strove to connect the Eastern and Western art worlds. He curated Chinesische Künstler der Gegenwart (“Modern Chinese Artists”) in 1963, held at the Municipal Museum of Leverkusen in Germany. Hsiao received significant support from scholar Udo Kultermann. This extremely rare and historic exhibition of modern Chinese artists at the time included works by many members of the Ton Fan Art Group, as well as Richard Lin, Ku Fu-sheng, Hsiung Ping-Ming, Walasse Ting, I. M. Pei, Chu Teh-Chun, and Zao Wou-Ki.

Movimento Punto may be the most important cultural counterattack in 20th century Chinese art history. In 1961, Hsiao Chin founded Movimento Punto in Milan with Italian artist Antonio Calderara and Japanese sculptor Azuma Kenjiro, advocating the mindful spirit of Tang and Song Buddhism, which would rescue the postwar art world from the aimlessness that came about from an overabundance of movements. Taking the point as its symbol, the group wanted its members to establish a starting point toward a clear scope “to understand the condition of the finite in the infinite, and to comprehend the authenticity of existence and thought.” Visual art should be unconstrained and universal but also emphasize deep thinking and observation, otherwise the work can only able achieve scant social value, according to Hsiao.

Dancing Lights was the strongest manifestation of my spiritual energies in the '60s.

- Hsiao said in an interview, referring to a series of 19 works that best represent his paintings from the Movimento Punto period.

Since the beginning, Movimento Punto had an international structure, holding 13 exhibitions from 1962 to 1966 in more than a dozen European cities, with participating artists from Asia, Europe, and Latin America. During this period, Hsiao encountered Spatialism, Op Art, Kinetic Art, ZERO, and other avant-garde European movements, and he also devoted himself to exploring Eastern Buddhist and Daoist philosophies. His work from this period absorbed the philosophies of two major cultural systems, creating a distinctive mode of abstract painting. Hsiao later founded the International Surya Movement in 1977 and the International Shakti Movement in 1989, considered extensions of Movimento Punto.

I gained understanding as I painted, and I was finally elevated to another realm.

Hsiao Chin’s abstract painting continued to develop around the themes of Zen and qi. Tragedy struck in 1990, when Hsiao’s daughter Samantha unexpected passed away. This blow devastated the artist, leaving him unable to create for a time. However, he emerged having come to an epiphany and painted his classic series: The Eternal Garden, Beyond the Great Threshold, Samantha’s Ascension, Samadhi and Light on the Other Shore. The works embody Hsiao’s realizations about life brought on by the immense pain of his loss. The beginning and end of life are just transformations in existence, and he melded Zen and Daoist thought into his inner life. Hsiao Chin completely immersed himself in exploring the mysteries of the universe, and as a result, his works seem to expand in space, becoming even more magnificent.

Putting the Pieces Together

If the Movimento Punto and Eternal Garden works in this exhibition have a retrospective quality, then the 12 glass mosaic works represent the first series to be presented intact. Hsiao Chin’s work with glass mosaics began in 2005, when reporter and art critic Luciana Schiroli introduced him to the mosaic expert Lino Reduzzi, a graduate of the Accademia Carrara di Belle Arti and the Department of Architecture at Politecnico di Milano. Reduzzi was deeply moved by Hsiao’s work when he first saw it in 1976. Hsiao returned the favor and visited Reduzzi’s studio, and was duly impressed by the Italian artist. The two then decided to work together, creating mosaics for the next 15 years.