One of a Kind: The Dowager Duchess of Devonshire

By James Reginato
As Treasures from Chatsworth: The Exhibition prepares to open on 28 June in New York, we revisit stories on the extradordinary house and its inhabitants from the Sotheby's magazine archive.

The youngest of the wonderful Mitford sisters, the Dowager Duchess of Devonshire spent her last years in a charming 19th-century vicarage on her vast estate. Sotheby's sold this remarkable selection of personal property from her home at auction in 2016, and in the weeks before that sale, James Reginato recalled a woman of inimitable style and personality.

O ne of the highlights of my career as a journalist occurred in 2007, when I was invited for lunch with Deborah Vivien Freeman-Mitford Cavendish, the Dowager Duchess of Devonshire, not long after she had settled at the Old Vicarage.

Located less than a mile from Chatsworth, the house where she had been chatelaine for more than 50 years, the Old Vicarage would be her last home, and the Dowager Duchess (who died in 2014, aged 94) was thoroughly enjoying the downsizing: “The luxury of having everything so small – it’s simply amazing!” she marvelled to me. With eight bedrooms, the Old Vicarage’s splendid 19th-century stone building was hardly diminutive, but after half a century living at Chatsworth – whose 297 rooms made it one of England’s most palatial stately homes – any other place was bound to seem cosy. Yet Debo, as she was known, did not mind at all – she spent her last years packing the Old Vicarage with the style and charm for which she was celebrated.

A fascinating array of fine and decorative art, jewels and books from the Old Vicarage were offered on 2 March 2016 at Sotheby’s in London, showcasing the Dowager Duchess's idiosyncratic taste and boundless energy connoisseurs around the world still associate with the Mitford sisters, of which she was the last surviving. Titled Deborah, Duchess of Devonshire: The Last of the Mitford Sisters, the sale was a wonderful reflection of the Old Vicarage’s remarkable occupant.

Born in 1920, she was the youngest of the six extraordinary sisters who enthralled England and much of the world with their beauty, wit, literary prowess and adventures. “Whenever I see the words ‘Peer’s Daughter’ in a headline, I know it’s going to be something about one of you children,” their mother, Lady Redesdale, once reportedly quipped.

While two of her sisters staked out positions on opposite extremes of the political spectrum – communism for Jessica, fascism for Diana – and Nancy became a beloved author, Debo preferred quiet country life.


That is what she expected in 1941 when she married Andrew Cavendish, the second son of the 10th Duke of Devonshire. “I expect we shall be terrifically poor,” Debo wrote to Diana shortly before her wedding. “But think how nice it will be to have as many dear dogs and things as one likes without anyone to say they must get off the furniture.”

Three years later, however, Andrew’s elder brother Billy (who had married Kathleen Kennedy, a sister of JFK) was killed in action during World War II, and then in 1950, the 10th Duke died unexpectedly at age 55. As a result, Andrew inherited the dukedom, which came with magnificent properties, including Chatsworth, one of the most treasure-filled houses in England.

From then on, contrary to Debo’s early expectations, there would be no genteel poverty in her future. Now a Duchess, she was saddled with the responsibilities that came with a major estate. Following the deprivations of two world wars and a massive tax bill, the place had become “a fabulous mess,” as she once put it. Characteristically, Debo stepped up to the plate. Over the next decades, her diligent and imaginative efforts brought Chatsworth back to life – first as a family home for herself, the Duke and their three children, then as one of the top historic sites in England. Today, more than five decades after she arrived there, Chatsworth remains a major draw: Some 650,000 visitors flocked to the 35,000-acre estate last year to see the magnificent estate and its myriad attractions, from garden, park and farmyard to one of the most important collections of art and antiques in England.

After the death of her husband in May 2004, their only son, known as Stoker to family and friends, became the 12th Duke of Devonshire; following England’s custom of primogeniture, it was a given that the Dowager Duchess would vacate Chatsworth so he could take over its reins. She embraced the task of moving with her customary enthusiasm and style. Although the Old Vicarage was in need of refurbishment at the time, to no one’s surprise the Dowager Duchess worked her magic on it and thrived there until her death. “She made it incredibly nice, incredibly quickly,” says the Duke. “It felt immediately like it had always been her home,” adds Stoker’s son, William Cavendish, Earl of Burlington. “It was an extension and reflection of her character.”

‘You think it’s mad? It is!’ she said, answering her own question with a laugh. ‘But I’m starting with a bang, because when you’re 87, you can’t wait.’

Such was evident from the contents of Sotheby’s 2016 sale. With many items that were highly personal to the Duchess, the auction was a seismic event for Mitford aficionados as well as for the multitudes for whom Debo was simply one of the great personages of our time. Among her fervent fans was Charles, Prince of Wales, who attended her funeral with the Duchess of Cornwall. “My wife and I were deeply saddened to learn of the death of the Dowager Duchess of Devonshire,” he wrote in statement at the time. “She was a unique personality with a wonderfully original approach to life and a memorable turn of phrase to match that originality. The joy, pleasure and amusement she gave to so many… will not be easily forgotten.”

It was my great privilege to experience the Dowager Duchess’s inimitable spirit firsthand during my visit to the Old Vicarage.

On a bright spring morning, she bounded out of the door, shod in green Wellingtons and wearing a knee-length skirt of glove-soft black leather with a leopard-print cashmere cardigan. She first gave a tour of the elaborate garden she had just planted, which included dozens of roses – a rather courageous and optimistic undertaking for a person of her age. “You think it’s mad? It is!” she said, answering her own question with a laugh. “But I’m starting with a bang, because when you’re 87, you can’t wait.” She took particular pleasure in her vegetable garden. “Such a comfort, having your own veggies.”

As for the interior of her new home, she explained that the eminent interior designer David Mlinaric, her good friend, had given her some technical advice, but that she had essentially done it all. “I can’t live with someone else’s ideas,” she explained – although given her experience with Chatsworth, no explanation was necessary. “To her way of thinking, it was incredibly bizarre to have someone else decorate your house,” the Duke confirms. “When she redecorated Chatsworth in the 1950s, she never had anybody help her. In the same way, when she moved into the Old Vicarage, she did it entirely on her own.” While she brought many of her favourite possessions from Chatsworth, she made acquisitions for the Old Vicarage, too. “It’s a mixture of old and new,” he explains. “Eclectic. Consistently inconsistent, like she was.”

The sale thus featured a broad range of items, including fine furniture such as a suite of exquisite Regency chairs – commissioned by another celebrated Duchess of Devonshire, Georgiana, wife of the 5th Duke – and art, such as portrait of Debo by Duncan Grant. Among the Duchess’s jewellery was an item that is both sentimental and historic: a diamond heart-shaped arrow brooch designed by her husband and given to Debo as a 60th wedding anniversary gift. Then there were objects that only Debo would have, such as special chicken boxes inscribed with her initials, made so she could transport her prized poultry to shows. (Both the Duchess’ style and her affection for her fowl were captured beautifully by Bruce Weber, who photographed her feeding her hens in a Balmain gown and pearls.)

Her library featured numerous special signed editions, from Brideshead Revisited (“Debo & Andrew with love from Evelyn – a very old fashioned story”) to Times to Remember (“To Debo and Andrew, with affection, Rose Fitzgerald Kennedy”). Also on the block were choice pieces of Elvis Presley ephemera, including a signed photo and books, all testaments to the Duchess’s adoration of the star. “She was mesmerised by him, she just thought he was a great genius,” says grandson William.

“She had an enormous range of interests and friends,” the Duke concludes. “She would visit Graceland, and then the next day be at the Wrightsman Galleries at the Metropolitan Museum of Art, but she was always her own person.” 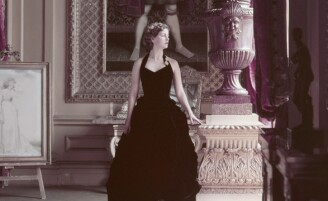