By Halina Loft
Two hundred years ago, Walt Whitman – one of the greatest American poets – was born. In keeping with the occasion, Sotheby's is pleased to offer several fine & rare Whitman titles, including a first edition, first issue of Leaves of Grass . The Fine Books and Manuscripts Online sale will continue until 21 June at 12:00 PM EDT – submit your bid now, before it's too late.

“T he story I am about to tell you, reader, will be somewhat aside from the ordinary track of the novelist. It will not abound, either with profound reflections, or sentimental remarks. Yet its moral – for I flatter myself it has one, and one which it were well to engrave on the heart of each person who scans its pages – will be taught by its own incidents, and the current of the narrative.”

These few lines may not be as ubiquitous as those in “O Captain! My Captain,” nor as visionary as the phrasing in “Song of Myself" – yet the paragraph, which begins the short story Franklin Evans; or The Inebriate. A Tale of the Times, published in 1842, rings with Walt Whitman’s signature voice: at once intimate, jovial and wholeheartedly sincere.

Therein lies the singular talent of Walt Whitman, the great American poet, writer, and individualist; a man whose New York Times obituary declared a “remarkable and original character – a poet who was little careful of rhythm and had the courage to speak out.”

This May 31st marked the bicentennial of Whitman’s birth. Across the country, literary lovers celebrated with marathon readings and Whitman-themed cocktails. And in New York, Whitman’s hometown, the birthday party is set to continue all summer long.

It was in New York that Whitman first learned to write, and tried his hand at journalism. As a young man, Whitman even founded a newspaper, the Long-Islander, which is still published today (though Whitman sold the paper to a competitor after ten months).

And it was during this period that Park Benjamin, editor of the Extra Series of The New World, asked Whitman to pen a story on the dangers of alcohol. Whitman was a proponent of temperance in his early days (a view the poet later expressed embarrassment for), and was happy to oblige. From this came the sentimental story of Franklin Evans, which was published in 1842.

But despite his efforts, Whitman was not satisfied with his journalistic career. As he notes in a New York Herald article from 1888:

After continued personal ambition and effort as a young fellow to enter with the rest into competition for the usual rewards, business, political, literary, &c., to take part in the great melee, both for victory's prize itself and to do some good; after years of those aims and pursuits, I found myself remaining possessed, at the age of thirty-one to thirty-three, with a special desire and conviction. [....]This was a feeling or ambition to articulate and faithfully express in literary or poetic form and uncompromisingly my own physical, emotional, moral, intellectual and aesthetic personality in the midst of and tallying the momentous spirit and facts of its immediate days and of current America, and to exploit that personality, identified with place and date, in a far more candid and comprehensive sense than any hitherto poem or book.

Whitman aspired to be a great poet – and so he set forth to work. From his home on 99 Ryerson Street in Brooklyn, due East of Fort Greene Park, Whitman penned his magnum opus: Leaves of Grass.

In 1855, Whitman self-published the first edition of Leaves of Grass; Whitman partially type-set the pages and printed them using a small hand press owned by the Romes on Cranberry Street in Brooklyn. Of the 795 copies published, only a select few were bound in this ornate, original binding: a dark green, coarse-ribbed cloth, gilt spine and floral ornaments, blind-stamped floral ornaments, upper cover titled in ornamental, "rustic" gilt font all within triple-ruled frame, marbled endpapers and gilt edges.

Sotheby's is pleased to offer a first edition, first issue of this great work, considered one of the most attractive but fragile books in American literature.

Whitman pushed to sell his work of poetry, adding new poems to create a much-expanded work. Thayer and Eldrige, publishers of the 1860 edition, also committed themselves to selling Whitman. An imprint for that edition includes several positive reviews, three of which Whitman wrote himself.

Today, Whitman's work needs no fabricated reviews. Leaves of Grass is considered to be one of the greatest works of American literature, and subsequent reprints ensured generations of students knew the poet's voice by heart. 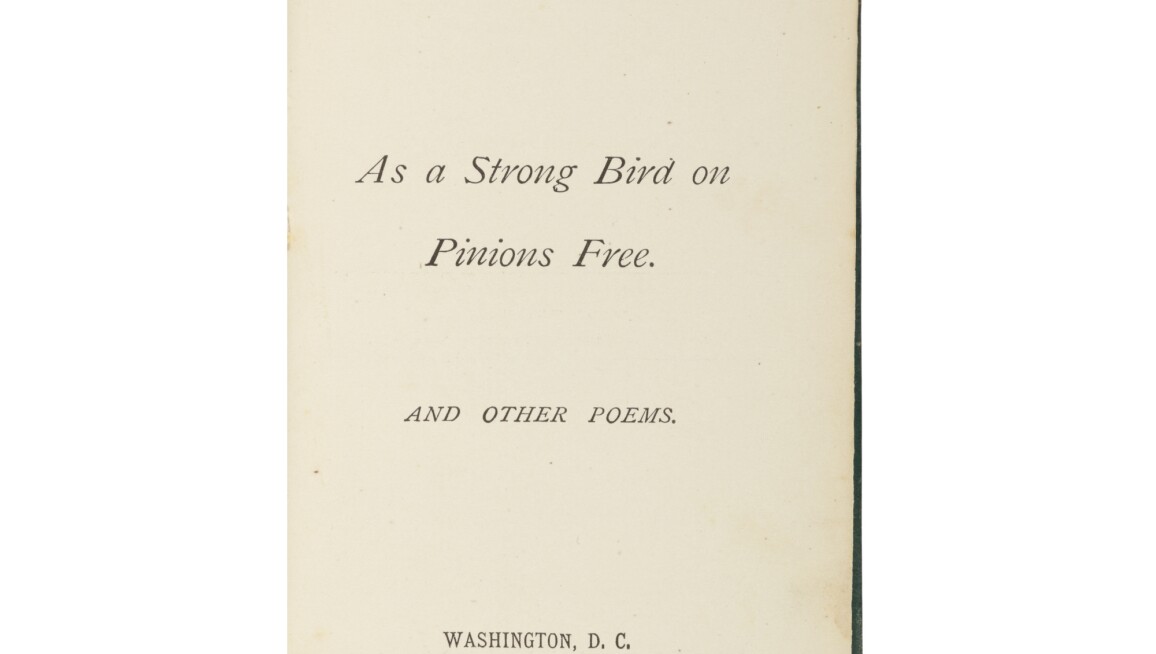 Of course, Leaves of Grass would prove to be just the first of Whitman's many great accomplishments as a poet. In the decades that followed, Whitman wrote works to galvanize Union troops and eulogize a fallen president; his stanzas united Americans of every race, gender and religion.

As poet Langston Hughes noted in his essay "The Ceaseless Ring of Walt Whitman":

Certainly, [Walt Whitman's] poems contain us all. The reader cannot help but see his own better self therein.