The artist has found a new vantage point in the wake of a world transformed.


L ogging into a Zoom chat, I find artist Nick Cave passionate and full of energy. He is working towards the opening of Until at the Momentary in Bentonville, Arkansas, as well as staging works and happenings in response to the pandemic and Black Lives Matter. You may know him for his wearable sculptures, or his glorious black bodies draped in tole flowers, but he is at a stage where his vision is becoming increasingly immersive and, what's more, he’s inviting you in.

As an artist, Cave has fared well in quarantine; he speaks of a hyper-awareness of his routine and the unifying effects of a universal reduction of life to its bare essentials. It is this unity that he credits with the global activation of the Black Lives Matter movement in the wake of the murder of George Floyd in May. “We witnessed it together, not just in the United States, but the whole world,” he says.

Cave felt devastated by what he saw, but was also inspired by the global response. “What have I been doing?” he asked himself. The truth is that Cave has been doing plenty, but the murder and subsequent wave of awareness and protest still hit a reset button.

For him, the situation recalled that of Rodney King, who was beaten by LA police in 1991. Cave sees this moment as his political awakening. He was at art school and, on trying to discuss what had happened to King, found he couldn’t express himself. Disappointed, he would sit, soul-searching in a local park, thinking about his own experiences of being profiled.

One day he began collecting twigs, not having a finite idea of what he would do with them. He then returned to the studio and began to make a suit; he realised it made a noise when he moved, hence “soundsuit”.

Cave’s soundsuits are wearable sculptures; raceless, genderless and ageless. They began to take on different textures and colours, and were often made out of discarded materials. He and friends then began to go out into the streets to “activate” the suits in group performances, which at once liberated and empowered them. “I would dance out my frustration,” he says of his clubbing days, citing the collective release of the dancefloor as a unifying force.

Now, in 2020, the whole world is living in varying states of quarantine and lockdown and the Black Lives Matter movement is a global concern at an institutional level. “I feel that now I can step into my success; my black excellence,” says Cave. This position is a new vantage point for the artist, and his energy is infectious.

“I feel that now I can step into my success; my black excellence”

Until – an immersive installation – is Cave inviting us into a soundsuit, revealing the beauty and challenges of what the interior of these works is like: angry, beautiful and full of light and movement. But, of course, there are also bullets and targets. Cave says he is thrilled that he can open the show as the world goes through this transition in terms of race and human rights, and that to spend time inside the exhibition is healing.

Continuing this momentum is essential to Cave, who installed AMENDS in the window of Facility gallery in Chicago and whose States of Being, a static exhibition complemented with music and spoken work happenings at Jack Shainman in New York, will open in September. The idea is that of a healing, inspirational space that can be communicated to the world. He holds up his phone to the screen on Zoom. “This has done so much for us,” he says. “Let’s keep the information flowing.”

in other words Interviews Sotheby’s Magazine

Whether you are an individual collector, a museum, or a corporation, Advisory at Sotheby’s offers bespoke art advisory encompassing the full range of the market, together with access to the global resources of the auction house—an extraordinary combination without peer or precedent. 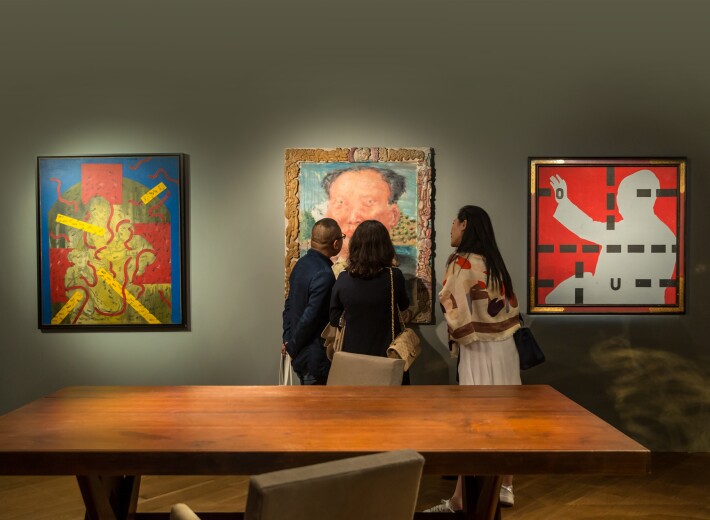 in other words: September Issue