Mountains of Emotion: Sohlberg and the Summit of Norwegian Art

I t’s no surprise that Norway’s national painting is of mountains, for the country’s colossal peaks are its pride and joy. Ibsen dramatized them, Munch humanised them, Grieg scored them. A-ha even sang about them.

Harald Sohlberg’s 1914 oil painting Winter Night in the Mountains – described by one critic as “arguably the most compelling symbolic expression of the sublime by any Norwegian painter” – fixed the Rondane mountains of central Norway in a luminous haze of midnight blue. Skeletal trees puncture this ocean of night and a single, divine, star burns at its centre. As Sotheby’s offers Sohlberg’s enigmatic watercolour of his iconic motif, Norway’s obsession with its immense, humbling heights is brought into focus.

The story of Sohlberg’s love affair with this vista began with a jaunt. In 1899, the outdoorsy artist set off on a skiing trip with friends, a boys’ outing with sledges and polar tents. He was immediately captivated by what he discovered in the Rondane National Park. In early works, he pictured his friends striking out along the plateau, later he pared his compositions down to a stylised mountainscape that quivers somewhere between the uncanny and the tranquil. For three decades, he returned to the theme, drawing, photographing, walking and painting the region. He even spent his honeymoon there.

Sohlberg was not alone in his obsession. Ibsen trekked the same territory, using Rondane as the backdrop to his masterwork Peer Gynt, which in turn inspired Grieg’s heart-pounding orchestral piece ‘In the Hall of the Mountain King’. Today the area is loved by cross-country skiers, climbers and hikers (which, collectively, is most of Norway’s population).

Both Sohlberg and Ibsen found a spiritual quality in these bracing panoramas. In his poem Mountain Life, Ibsen writes: “Cut off from men by spate and scree / It has a heaven more broad, more free.” That sense of sanctuary is echoed in A-ha’s song, Foot of the Mountain, on which Morten Harket sings of the chilly balm of the wild: “It will be all right / Through the longest night / Just silence everything.”

These painters, writers and singers have been nourished by centuries of Norwegian folklore. At the time Sohlberg was painting, Peter Christen Asbjørnsen and Jørgen Moe were collecting Norwegian folk tales for their monumental anthology Norske Folkeeventyr. Its pages were full of mountains. Its illustrator, Theodor Kittelsen, used them as a stage for trolls and spectres, explaining that he was drawn to their secret and mystical aspects.

Indeed, the colossal Norwegian fjellkjeder – those vast rugged ranges – have been depicted in a variety of ways: from the pure Romanticism of Johan Christian Dahl and Thomas Fearnley to the intense colourscapes of Nikolai Astrup – sharp with apple and lemon hues – and, of course, Sohlberg with his crepuscular blue.

More recently, there have been the playful sculptures of Gunnar Torvund, whose granite Fjell sits outside Kristiansand’s police station, and the photographs of Tonje Bøe Birkeland, who frames fictional female adventurers in high-altitude settings.

Although Rondane inspired Norway’s national painting, it does not depict its national mountain. That honour goes to Stetind, a great lightening rod of rock in Nordland, famously painted by Peder Balke in the late 19th century. With his near-monochrome oils, Balke’s idea of mountains was as visceral as Sohlberg’s was emotional. In recent years, a similarly striking geometry can be found in the work of Ornulf Opdahl, who brings an abstract sensibility to his paintings of coastal summits reflected in the sea.

Another contemporary eye on the subject is novelist Karl Ove Knausgaard, who looks to Munch as his guiding light where nature is concerned: “The mountains, the sea, the trees, and the forests, everything is coloured by humanness,” writes Knausgaard.

And it is this melding of feelings and setting that powers Sohlberg’s depiction of Rondane. There are no figures here but the landscape is shaped by human emotion rather than fidelity to nature. “The longer I stood gazing at the scene the more I seemed to feel what a solitary pitiful atom I was in an endless universe,” wrote Sohlberg. Just as Munch felt it at the fjord, Sohlberg sensed it in the foothills.

In the early 20th century, Norwegian photographers, with ropes and crampons and precariously-perched tripods, scaled the nation’s great rock faces, creating extraordinary near-aerial prints of this previously unrecorded environment. What painters and writers imagined, they exposed.

The advertising executives followed suit: images of invigorating, awe-inspiring elevations have been utilised to sell the services of everything from remote hotels to Norwegian toothpaste. And with the development of the Norwegian railway network and the popularity of the Hurtigruten boat service along the fabled fjord-indented west coast, the mountains have gradually opened up to everyone.

Today, international tourism and smartphones deliver a constant stream of Norwegian peaks to Instagram, all digitally emphasising what Sohlberg seized on in Winter Night in the Mountains. As the painter explained more than a century ago, here is “a new, unimagined and inexplicable world.” 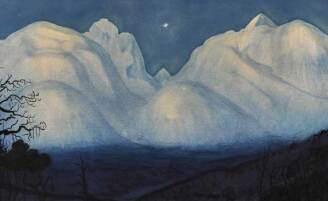