Following the landmark retrospective, Moholy-Nagy: Future Present, at the Solomon R. Guggenheim Museum from May through September 2016 which explored his use of experimental materials and unconventional techniques, two works from the exhibition, EM 1 (Telephonbild) and CH P. Space Modulator will be included in the upcoming Impressionist & Modern Art Evening Sale.

László Moholy-Nagy was a visionary who advocated for the integration of technology and industry into art. Throughout his career, he incorporated groundbreaking techniques, which tested preconceived notions of how artistic mediums could integrate with art, technology and the everyday object.

Conceived in 1922 and executed in 1923, EM 1 Telephonbild is a masterwork of twentieth-century conceptual art that recalls the spirit of Marcel Duchamp. Following the submission of Duchamp’s Fountain to the American Society for Independent Artists in 1917, the concept of artist as alchemist dominated art historical discourse. EM 1 Telephonbild echoes Duchamp’s readymade Fountain and reveals Moholy-Nagy’s art at its most theoretically complex. The artist claimed to have ordered EM 1 Telephonbild over the telephone, a radical departure from conventional artistic practice, which prefigured the birth of conceptual art by several decades.

The first owner of the present work was Jan van der Marck (1929-2010), an art historian, museum director and curator who championed new art throughout his illustrious career. Van der Marck helped found the Museum of Contemporary Art in Chicago and while there, organised the conceptual exhibition Art by Telephone, 1969 in which artists gave instructions as to how their works were to be made and installed via the telephone.

The remarkable technique exhibited in CH P. Space Modulator helped establish Moholy-Nagy as a groundbreaking new media artist. His unrivaled experimentation was recognised by the renowned co-founder and first director of the Solomon R. Guggenheim Museum, Hilla von Rebay. In 1941, a year after CH P. Space Modulator was completed, von Rebay gave Moholy-Nagy a solo exhibition at the Museum of Non-Objective Painting and would soon become his most devoted collector. The intricate CH P. Space Modulator or Iridescent Space Modulator represents the culmination of Moholy-Nagy's experimentation with light and colour that began during his tenure at the Bauhaus in the 1920s. Executed in 1940 following the completion of his revolutionary Light-Space Modulator, this extraordinary work evidences how the radical manipulation and integration of light and form can create unexpected and unprecedented images. 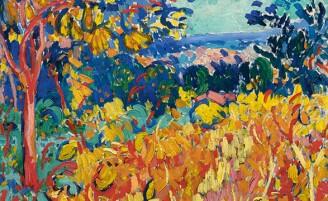