Midas and the Infinite

Hong Kong – Midas and the Infinite is one of Damien Hirst's series of opulent butterfly monochrome paintings made for the Sotheby's auction 'Beautiful Inside My Head Forever' in 2008. With its pseudo religious glow, the stunning painting is made up of a panoply of different butterfly species – some large, some small, some brightly coloured, others mottled. The exuberant hues of the butterflies' gossamer wings – iridescent and reflecting light – are set on a stunning expanse of gold that induces awe and contemplation. Their fragile existence and brief lifespan become poignant in their enshrinement in household gloss. The use of butterflies make up a core body of work in Hirst’s oeuvre, and the animal has both religious and spiritual associations. For centuries, the image of the butterfly has been revered and reproduced by numerous cultural and religious groups, not only for its inherent beauty, but also for its symbolic significance. Contemporary French artist Jean Dubuffet, a pioneering figure of the Art Brut movement, was one of the first artists to use these specimens as “found objects” on his canvases such as Apollo Pap’s Nose from 1953. The butterfly can represent development, change and evolution at its most basic physiological level. The insect’s metamorphosis into a fully realized butterfly is one that is familiar to many; the egg hatches into a caterpillar which grows and then develops into a formed butterfly.

I've just made a series with all these pieces about Midas-all these gold paintings, gold and diamonds, and gold works, and it's definitely about feeling a bit like King Midas, like everything he touches turns to gold. And there are bad aspects of what can happen with that as well.

While this transformation often symbolizes new beginnings, closer inspection of the specimens in Hirst’s paintings, all immortalized through taxidermy and crucified onto canvas, speak of a much darker story. For the artist, this moment of realisation contains the oxymoronic beauty of horror, and horror of beauty. These delicate creatures die, but in doing so give birth to a beautiful object, the work of art. As ever in Hirst's work, beauty is laced with death.

Damien Hirst’s interest in the associations of life and death has long been the subject of his art, explored through numerous methods and forms. Graduating from London’s Goldsmiths College in 1989, Hirst would soon become the leader of the Young British Artists movement and a pioneering figure in the art world at large. The very first butterfly paintings were exhibited in 1991 at the Woodstock Gallery in London in a show titled ‘In and Out of Love.’ For the show, Hirst filled the gallery with hundreds of live butterflies, many of which spawned from those adhered to his monochromatic canvases with gloss household paint. The gallery was transformed into an artificial environment in which the butterflies hatched, became whole and died. By exhibiting live and dead insects together, the artist created an environment where the cycle of life and death co-existed for all to experience. This notion of observing mortality would become a dominant theme in much of Hirst’s work moving forward where animals such as cows, pigs, sheep, sharks, flies and of course butterflies are used as the central focus of his most ambitious and successful works to date.

Hirst’s butterfly paintings are laced with religious undertones and examine the spiritual uncertainty at the heart of the human condition. At over three-metres tall and painted in golden hues, Midas and the Infinite mesmerises the viewer standing before its presence. This reverence-inspiring experience calls to mind the elaborately painted altarpieces found in Christian churches. Originating from Europe during the Medieval Period, these altarpieces were elaborately painted, often gilded in gold, and meant to induce awe and worship from the church-goers (see above example). The most commonly-depicted imageries on these panels are that of the Virgin Mary and the birth of Jesus or the crucifixion of Jesus. While such direct religious iconography is no longer present in Hirst’s paintings, the use of gold as well as the ‘crucifixion’ of the butterflies onto the canvas is certainly a conscious decision to reference the church and religion as a whole, which fits neatly into his larger exploration of posterity in art.

The theme of mortality is further addressed through the title of the painting. According to Greek mythology, King Midas is a character known for his ability to turn everything he touched into gold after a vain prayer for the ‘golden touch.’ As a result of his vanity, tragedy ensued where Midas inadvertently turned his daughter into a statue and ultimately died of starvation himself after even his food and drink turned into gold. The pain and pathos of the legend, referenced clearly in the present lot’s title, are meant to draw attention to the sins and desires that afflict mortals, and further raises the question of whether art can be an antidote to the nihilistic experience of living in an uncertain world. In interweaving religion, science and art, distinct categories each with its own fervent claim to truth, Damien Hirst creates an object of bewildering beauty which eloquently communicates the conceptual premises at the core of his entire oeuvre. Invoking bliss, beatitude and exaltation, Midas and the Infinite is an iconic masterpiece of the artist’s probe into the spiritual as well as his grand theoretical constructs concerning mortality and eternal life. 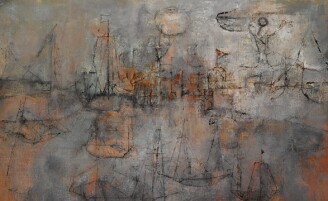