T his December Sotheby’s Hong Kong introduces ‘Memory & Modernity’, an extraordinary ensemble of four paintings by Mai Trung Thu (1906-1980) from his early days in the 1930s to the dusk of his life in the 1970s. Emerging from an Important European private collection, they bear witness to the exquisite taste of their owner, a friend of the master’s family. The four paintings were acquired in the 1990s directly from the family of Mai Trung Thu, giving the artworks an even more meaningful dimension.

A painting by Mai Trung Thu is the promise of a journey – to a ‘dreamed Vietnam’. The term was coined by the curators of the artist’s first retrospective currently held by the Ursulines Museum, in Mâcon, in partnership with the Cernuschi Museum, Paris and overseen by Mai Trung Thu’s sole daughter Madame Lan Mai. This exhibition presents the wide variety and yet consistency of the artist’s work all through his career in a chronological and thematic display; children, music, maternity scenes, war, etc. The teams of the Ursulines and Cernuschi museums have accomplished the commendable and delightful exploit of gathering a very large number of paintings selected from French national collections, private collectors and from the artist’s family estate, most of them never seen before. To behold one of these paintings is also a journey inside the artist’s own sensibility. His paintings connect his relationship with Vietnam and with France, as well as his affinities within Sino-Vietnamese and European art history. Through his work, we are given a glimpse into the artist’s lifelong quest of identity. For the story of Mai Trung Thu’s life is a singular tale.

The video above is available in French only.

Born into Vietnamese high society, Mai Trung Thu was the son of mandarin Mai Trung Cat, governor of Bac Ninh region. When the mandarin system of government was abolished in 1915, Mai Trung Thu had no choice but to find his own path. In 1925, the newly established Ecole des Beaux-Arts d’Indochine in Hanoi presented an incredible opportunity. After successfully graduating in 1930, Mai Trung Thu soon earned a teaching position in Hue, where he taught for seven years, and at the École in 1936 while he participated in local and international exhibitions. In 1937, he travelled to France to attend the Exposition Internationale des Arts et Techniques dans la Vie Moderne in Paris. Eluding an arranged marriage and the prospect of an already mapped-out life in Vietnam he decides not to return. He along with fellow artists Le Pho and Vu Cao Dam, driven to succeed, chose to establish themselves in Europe. Mai Trung Thu’s productive and acclaimed career in France would span more than 40 years. He died near Paris in 1980.

A post shared by Vietnamese Art in Paris (@vietnameseartinparis)

The Last Rays of Sunlight in Vietnam

The Ecole des Beaux-Arts d’Indochine attributed great significance to the development of East Asian artistic techniques, while at the same time incorporated European media and practices into the curricula. Thus, amongst Mai Trung Thu’s earliest paintings appear some remarkable works of oil on canvas. They are the rarest paintings in his body of work with only seven recorded by the artist to have appeared at auctions. Mai Trung Thu’s Femme au chapeau conique le long de la riviere is therefore especially significant. The painting is dated 1937, the artist’s last year in Vietnam, as he left the country in July.

How can we not think of Portrait de Mademoiselle Phuong, another oil work by Mai Trung Thu created in 1930 and sold by Sotheby’s in April for HK$24.4 million (US$3.1 million) setting the world auction record for any Vietnamese artwork? An echo between the two paintings can be seen in the obvious correspondence of medium but also in the iconography; the model wearing an identical green tunic. One thing we notice in the Ursulines Museum exhibition is how much Mai Trung Thu liked this green ao dai for it appears in at least five major artworks from the period. Although the identity of the woman is unresolved one thing is certain; she was undeniably Mai Trung Thu’s favorite model during his time in Hue. Indeed many drawings and paintings made during his Hue period depict over and over the same individual showing an uncanny resemblance with the woman in Femme au chapeau conique le long de la riviere: the oval-shaped face, large eyes and a curled strand of hair falling on the cheek. On our painting she stands by a river during midday, her green ao dai tunic resplendent in the sunlight as if she was a figure carved from jade. Her face cultivates mystery, shaded by a non la hat. In the background clouds gather above the river where two boats are sailing.

The tranquillity of the scene induced by the colour harmony and the sweet expression of the woman is counterbalanced by the tension of the hat’s strap she pinches and the breeze animating the flap of the tunic. I particularly want to stress out how Mai Trung Thu excelled at giving a sense of narration to his oil paintings, bringing unity and force to the canvas. Furthermore through this work Mai Trung Thu showcases his palette skills and brushstroke dexterity, achieving a highly seductive impression of Hue daily life.

In France, Mai Trung Thu coped with the knowledge that he would not return to his home country, by abandoning the medium of oil on canvas and, instead, devoted his work to gouache on silk. He worked in this medium from the late 1940s onward, developing an idiosyncratic style that remains instantly recognisable. In doing so, he discarded the lessons of the Ecole des Beaux-Arts d’Indochine to favour a Sino-Vietnamese approach. Layered planes would replace perspectives, colours would reject shadows, and canons would forsake realism.

Executed in the mid-1960s when Mai Trung Thu introduced his brightest colours, Mélodie is a very elegant and exceptionally large work from this period. In a veranda only suggested by the intricate red fence, a lady is playing the dan nguyet lute for her companion. Music was particularly meaningful for Mai Trung Thu, who had been an accomplished practitioner of Vietnamese classic music since his Hue period. Music was also essential to his process, as he would play Vietnamese records while painting. His artworks absorbed this additional dimension, with its evocative power, thus giving Mélodie a unique atmosphere. Can you hear the sweet melody coming out of the painting?

Painted two years earlier in 1964, Jeune femme couchée already revealed his ability to create a space of poetic intimacy. In the work, a woman disrobed of her ao dai is wearing nothing else but silk pants and covering her chest with a fan. Despite the perfunctory pretence at Confucian modesty, Mai Trung Thu created one of his most erotic works in Jeune femme couchée. After personally reviewing hundreds of the artist’s works I can say that very few present an intentional equivocal scene of such assertiveness. He painted the background red, a colour associated with passion in European symbolism, and also depicted a vase, a metaphor full of innuendo. In the same vein, the curtains, frequently seen in Vietnamese portraits of ancestors, now emphasise the beholder’s voyeurism.

Not only referencing Vietnamese culture, the artist indubitably alludes to Renaissance painters. This new direction in Mai Trung Thu’s career may be the influence of Jean-François Apesteguy, his gallerist as of 1955, who encouraged the artist to find inspiration in classic European art. In my opinion this painting where everything is suggested is an excellent testimony of Mai Trung Thu’s great erudition.

Nature Morte from 1970 is a very fine example of the artist’s interest in still-life painting, a genre steeped as much in European artistic traditions as it is in Sino-Vietnamese ones. In Chinese, jing wu or ‘quiet objects’ may be symbolic evocations of blessings, commemorations of events, or even auspicious wordplays. It is no different in Vietnam where still-life imagery appears on woodblock prints decorating the house. Flowers and fruits often hold specific meanings, which accord the picture both aesthetic and literary merit. In Nature Morte, Mai Trung Thu has chosen a few apples and an orange, the latter expressing the wish for posterity, as the fruit holds the promise of many
seeds. In a complementary way the cut-open apple invokes European vanitas with an emphasis on the inexorable flight of time, as the fruit would soon bruise and spoil. Brought together, those fruits articulate the artist’s reflection on life. I cannot resist to mention Mai Trung Thu painted Nature Morte as he was entering the last decade of his life, investing this silk painting with an even more touching perspective. A still-life as a legacy. 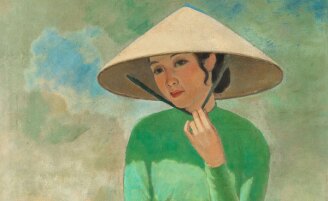