T o create his striking diorama maps, Sohei Nishino assumes the role of the flâneur, wandering the city for days and months, capturing images from every angle. He sorts through his thousands of photos, developing them by hand in his dark room and painstakingly arranging them into an intricate recreation of the city in accordance with his memories. Nishino subsequently digitally photographs the collage and the resulting composition is monumental in scale: often up to six by seven foot.

A rising star of contemporary Japanese photography, these composite maps were exhibited for the first time outside Asia at Michael Hoppen Gallery in 2011. He had his first solo US show in January 2017 at SFMoMa and this year he was nominated for the prestigious Prix Pictet award. Born in Hyogo in 1982, Nishino discovered a love for walking and photographing when he took part in the Shikoku Pilgrimage, in which eighty-eight temples spread over a distance of seven hundred and fifty miles are visited over a period of between thirty and sixty days. Shortly afterwards he enrolled in photography at the University of Osaka. During his studies he realised that the mass of photographs not selected for his projects were just as interesting as those that made the final cut. These realizations, along with the influence of Inō Tadataka, the 18th century cartographer, who spent seventeen years surveying the Japanese coastline on foot, pushed him to create his first diorama map.

When Nishino first begins work on a map, he goes straight to the highest vantage point in the city, in order to command a panoramic view. In his early compositions, the footpaths and roads which he studied from above are often emphasized whereas in more recent dioramas, portraits and street photographs are incorporated in order to recreate life on the ground too. The distorted angles and mixture of viewpoints have led to parallels being drawn between Nishino’s dioramas and medieval and renaissance maps. Both are characterized by the freedom of the maker to fill in the gaps where objectivity fails, to exercise subjective experience and memory in the final creation. This results in a composition that is familiar yet oddly disjointed, fantastical rather than scientific and of its own unique proportional scale. For the creation of Diorama Map, London, 2010, Nishino spent three months wandering the streets and took more than 10,000 photos.

Sohei Nishino’s diorama maps come to auction for the first time at Sotheby's on the 19th May. 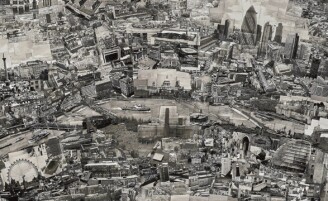