Mahogany and the Master Cabinet Maker

A head of Sotheby's sale, Mélanges – Provenant des collections du comte et de la comtesse de Viel Castel, in Paris on 12 September, we look at the craftsman behind one of the more exquisite pieces on sale, and the importance of mahogany in the Classical Revival of furniture making.

Mahogany was mainly used by English cabinetmakers from the first half of the 18th century because of the supply from the American English colonies. The French cabinetmakers started using it in 1750-60’s, following the English example; Oeben created mahogany commodes for Madame de Pompadour and Leleu continued using mahogany for prestigious orders such as the commodes for the Château du Marais. Once this rich, dark wood had been adopted, it made a major contribution to the Classical Revival. It enabled many renowned cabinetmakers to reinvent themselves by producing subdued, highly crafted furniture where the beautiful warmth of the wood complemented the pure lines of the Classical style.

Jean-François Leleu (1729-1807) was an important cabinetmaker. He made fashionable gilt-bronze mounted veneered furniture with porcelain and was one of the first to craft Neoclassical pieces. One of his first creations is probably the commode made in 1772 for Louis-Joseph de Bourbon, Prince de Condé (1736-1818), who was a very important client and one of the richest Princes at this time. Leleu's work is also famous because of the high quality of the materials used, probably thanks to the high standard of training he received from his master, the renowned Jean-François Oeben.

Jean-Francois Leleu distinguished himself, alongside some of his illustrious contemporaries, as an ambassador of the Classical Revival. However, he also established his own Neoclassical style by favouring monumental shapes and structural forms, as seen in the pair of cupboards sold by Mes Rieunier, Bailly-Pommery, Mathias, Le Roux, Oger and Dumont, Paris, Drouot in 1996. After the mid-1780s, Leleu moved away from meticulous marquetry and towards more sombre mahogany veneers, as well as pieces of furniture made of solid mahogany.

The satyrs’ masks on this pair of armoires are inspired by this Classical Revival and need to be seen in relation to the work of André-Charles Boulle during the reign of Louis XIV. Boulle used similar masks on bureaux plats, cabinets and meubles à hauteur d’appui, but Leleu slightly modified the pattern, always using a high delicacy of chasing.

On these pieces of furniture, inspired by fashionable Anglophilia, the architecture and the skilful play of relief made by flat and curvilinear moldings on the panel’s recesses prove the cabinetmaker’s perfect mastery. The dark wood is expertly contrasted with the use of a gilt bronze decoration. The woods, solid or veneered, are always chosen carefully and the proportions are always harmonious and architectural in design. 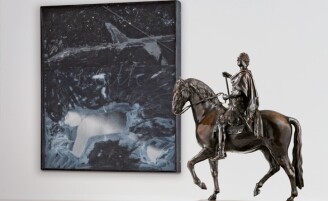