Luck Be a Lady: Barbara Sinatra's Life with Frank

By Wendy Holden
Barbara Sinatra led a life of glamour and philanthropy, flying to her husband Frank’s concerts and receiving his sweet love notes. Wendy Holden reveals her life through her collection as it comes up for auction

B orn in Missouri soon after the Great Depression, Barbara Ann Blakeley’s happiest childhood days were spent “in [her] grandfather’s general store where the all-male members of the ‘Spit ‘N Argue Club’ gathered around the pot-bellied stove chewing tobacco and complaining about the price of corn.”

After relocating with her family to California, Barbara became a typical teenager in bobby socks who sneaked to her local drive-in to listen to Frank’s songs, as Sinatra-mania gripped the country. She went on to open a modelling school, launched her own cosmetics line, and became a consultant to the first Miss Universe pageant. Her son Robert – “the best thing I ever did” – was born in between. When her first marriage to Bob Oliver ended, Barbara found work as a showgirl at the Riviera on the famous Las Vegas strip, where she caught the eye of every man she met, including Zeppo Marx of the Marx Brothers. They married in 1959 and she moved with him to Palm Springs.

Frank Sinatra was their next-door neighbour and they socialised frequently with him at cocktail parties and card games. As one of the so-called ‘desert rats’, Barbara grew close to Tony Curtis and Janet Leigh, Gregory and Veronique Peck, Dinah Shore, and the Kirk Douglases. She was chatted up by John F Kennedy and met Marilyn Monroe – “the girl with the saddest eyes”.

Marx, a jealous womaniser, repeatedly warned Barbara against Frank. But by the time “Mr S” kissed her, Barbara was smitten. “I fell so hard for him that I didn’t really have a choice.”

With her marriage to Marx over, Barbara rarely left Frank’s side for the next 26 years, although it wasn’t always easy. The emerald-cut 20-carat diamond ring offered in this sale – Lady Blue Eyes: Property of Barbara and Frank Sinatra – was one of two given to her in a pivotal moment in their four tempestuous years of courtship. Frank threw the two huge jewels onto the bed and told her to pick one. Once her chosen stone had been set, he dropped it into her glass of champagne, but he still hadn’t proposed – until she made him choose which finger to put it on.

The couple were married in 1976 at Sunnylands in Palm Springs, surrounded by some of the world’s greatest privately held art. Frank was 60, Barbara 49, and they both shed tears of joy. He showered her with gifts and flowers, including diamond bracelets slipped into the pocket of her dressing gown. He always left her loving notes whenever he had to go away. She kept them all.

Barbara came to know and love Dean Martin and Sammy Davis Jr and was often in the front row at their legendary ‘Rat Pack’ shows, and at all of Frank’s concerts. He helped her set up the Barbara Sinatra Center for Abused Children, and auctioned some of his paintings to raise funds. Barbara’s passion for the tranquil non-profit centre endured until her final days, and each year she buttonholed her wealthy friends for donations. Every spring she hosted a celebrity invitational golf tournament that raised millions and always ended with a black-tie gala at which the likes of Quincy Jones, Julio Iglesias, Smokey Robinson and Barry Manilow performed. “Coming face to face with those innocent little children who had been so mistreated tore my heart out,” she told me. “That’s when I knew I had to get more involved.”

When Barbara and Frank weren’t on the road or involved in fundraising, they bred Cavalier King Charles spaniels, played tennis, poker and golf, and enjoyed a cosy domestic life where he sat filling in the crossword “in ink” every day. They both wept once more as they retook their vows on their 20th wedding anniversary.

Frank died in 1998. Barbara’s grief was lifelong and deeply private. Until the day she died last July, she played his music from morning till night, and kept her home filled with his belongings, like a shrine.

Whenever I visited her, she’d walk me along corridors lined with an eclectic mix of cartoons, movie posters and gold discs. Every room was filled with awards, statues and glamorous photos of Barbara and Frank with their friends and family in happier days, many of which are in the auction. Frank’s Abstract after Mondrian hung in my bedroom at her Malibu beach house (a property now available to rent for diehard fans). The Norman Rockwell portrait hung in the hallway of her Los Angeles penthouse.

I last saw Barbara in March 2017 at her Palm Springs home, soon after her 90th birthday. Frail and in a wheelchair, she was nevertheless still the beauty queen. “Hi, sweetheart!” she cried. “Come on in, sit down, and tell me everything.”

Being with Barbara Sinatra was to step back in time to a truly golden age of Hollywood with someone who’d lived through it all. Generous and kind, she was one of the most remarkable women I have ever met, and I’ll always be grateful for my memories. Now anyone who bids successfully at this auction can take home a little piece of that gilded era and make new memories of their own. 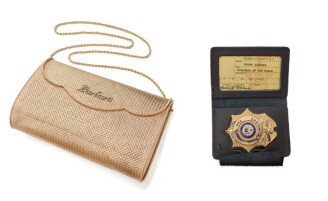 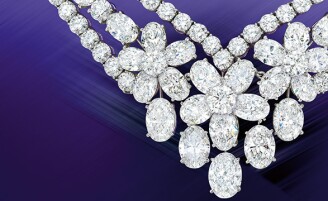