Leaving Logic at the Door: Paolo Roversi's Studio of Dreams

A head of the sale of some of his most famous portraits, as well as rare books and prints from his own collection, in the sale In the Studio of Paolo Roversi, the renowned fashion photographer discusses his Parisian home and studio, working with world-famous supermodels and his own approach to collecting.

When walking into your famous "Studio Luce", one immediately feels welcome, as if entering the privacy of a home. Can you tell us about “Studio Luce” and what it means to you?

When I first arrived in Paris, my studio was a maid's room. I have always used the places that I live in as my studios. There was the small two-room apartment, at the Contrescarpe, rue Monge. Later, it was boulevard Saint-Germain. I have always lived on the Left Bank. I always had a home studio in the sense that my studio always found its place in my house, or in my bedroom – in the first one, I didn't have much space – or in the double living room after that. Then I found this place on the rue Paul-Fort, it's a small building of three/four floors, where I had one floor to use as a big studio, one floor for my apartment. That's certainly why my studio is like a home. Because it's a mix of a living space and a workspace. And lunchtime is sacred during working hours, a sincere moment of conviviality. Not just to replenish oneself, it's a time of much conviviality that is important to me, in the spirit of the studio. It's something that puts people at ease, to make them feel at home and especially to create this atmosphere of intimacy and family.

"You don’t decide the future of a photo. The life of a photo is determined by its encounter with the public: that is its destiny, unpredictable."

Do you know what your studio was used for before you took it over, did you remodel it completely?

It dates from 1930. There were artists' studios, painters' studios, so it was already designed this way, with beautiful high ceilings and beautiful windows facing the northern sky, light without shadows, windows where the sun could not enter and disturb the painters.

The photographic studio is usually a place where everything is to be mastered – the light, the shadows – as for Richard Avedon, Irving Penn and many other portrait photographers. But in your photographs, the studio is more a place of dreams, poetry and happy accidents, how do you create such a setting?

You are known for your portraits of models who are today celebrities, such as Natalia Vodianova, Kate Moss or Naomi Campbell, to name but a few. Do you approach the work differently depending on the model?

They are different interpretations. The photographer is somewhat of an interpreter; you can't photograph Naomi or Natalia in the same way. They are singular personalities, with their own specific femininity, so, yes, you have to interpret them and sublimate them in a different way.

And these are models with whom you have worked long enough to be able to do this work, which does not only depend upon the moment of that first encounter, you have this greater knowledge of the model which allows for such sublimation.

Yes, once there has been a very strong encounter between a model and a photographer, it is very pleasant and important to continue to work together to develop a true collaboration, deeper and more intense, which leads to even more interesting results. If we stay with just that first encounter, that initial approach, it will always remain more superficial.

We are thrilled to include one of your favourite cameras in the sale, the Deardorff, which brought about these beautiful Polaroids. Do you use the Polaroid for inspiration or do you see it as a finished work?

The Polaroid was never a preparatory drawing. It has always been the finished work. All these photos on the wall are interesting because they tell us what a photograph is. You don't know what they will become, but among the ones on the wall, one stands out and becomes legendary. Everybody will want to have it, it’s on the cover of several books, it hangs in several museums, and others, next to it, very close, have remained in a drawer. They have never come out, never had the same reputation, nor the same success as the other one. So, each photograph really has its own life. And it's very difficult to predict that when you're working. You don’t decide the future of a photo. The life of a photo is determined by its encounter with the public: that is its destiny, unpredictable.

Your new book "Studio Luce" has just been published at the same time as the important exhibition "Paolo Roversi – Studio Luce" which was held this year at the MAR, the Art Museum of Ravenna, the city where you were born. You moved from Ravenna to Paris at the age of 26, at the beginning of your career. What impact did Paris have on your own aesthetic?

I was from a small town in Italy, marked by the Italian iconography in my head – Madonnas and saints – so for me, Paris was really a shock. It was in Paris that I discovered art by visiting those beautiful museums. I remember that at the beginning I would go to the Louvre every Sunday because it was free. The Pyramid did not yet exist in the 70s. And in the cafés of Montparnasse, one could still meet artists who had known Modigliani, Brassaï, Man Ray... One could still breath the air of that time and for me, it was fascinating, I was very influenced by all of this, I was familiar with Man Ray's studio, his wife Juliette. So, I was imbued by the artistic air of Paris. I have always lived on the Left Bank, Saint-Germain, Montparnasse – that's where I found my Paris.

Unlike painters, it is more unusual to find a photographer collecting other photographers. How did you, as an artist, become a collector?

When I first met [my wife] Laetitia, she was already a collector but of contemporary art, of course, more than photography. She was already a collector at heart and she passed this passion on to me. I went towards photography because I liked meeting other photographers: Larry Clark, Irving Penn, Richard Avedon. By meeting them, we were able to exchange works. I was also able to buy their photographs at auctions, because there were photos that I liked a lot and that I wanted to have at home to be able to admire them. I truly have the mind of a collector and it is in that spirit that I continue to collect.

The day that I bought Richard Avedon's prints – the photo of Marella Agnelli, and the portrait of Dovima with elephants – he was very surprised that another photographer would ask to buy his prints, and he was at the same time very touched by it. He wrote me a card saying that he was very moved, very proud that a photographer like me wanted to buy them. For him, it was a sign of respect and admiration. 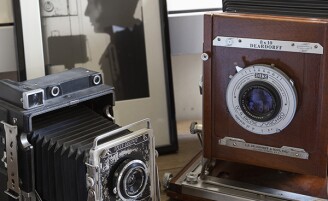