J oel Shapiro is one of the leading American sculptors practising today, working in a variety of materials to explore the potential of scale, texture and environment. As his works go on display in American Sculpture. Beyond Limits at Chatsworth House, he sat down with Sotheby's Amanda Partridge to discuss his creative process.

Amanda Partridge: I would like to start with a big question… Let's go back to the beginning of your career, working in New York in the late 1960s/1970s. It was obviously a very interesting time with the development of what would come to be known as Post-Minimalism and the beginnings of Conceptual Art. Can you set the scene for us?

Joel Shapiro: Downtown was exciting. It had yet to be gentrified. Manufacturing was on the wane and you could find loft space, add basic plumbing, and get to work. It was a radical environment and also a time of deep political unrest: the civil rights struggle, multiple assassinations, the war in Vietnam… Pop art seemed overly optimistic unless you saw it all as ironic. Irony is tough to see if you’re hungry. Minimal art was framed conceptually. They both evolved simultaneously. My generation, perhaps because of the political tumult and general sense of disillusionment, tore the stolid aspects of both minimalism and conceptualism apart and adapted them to their own needs.

AP: In your early work – pieces like One Hand Forming or your fingerprint drawings – you were very much working within this Post Minimalist discourse. Tell me a little bit about what you were trying to achieve with these works?

JS: They were a new beginning and I was not sure where they would lead. They were insistent about process and material and the haptic. I was trying to make irrefutable form! In the end they were about building via accumulation. I was curious when the aggregate might transcend the factualness.

AP: Are there elements of these early pieces – in terms of ideas or themes – that have persisted in your later work?

JS: Those early, process-based works were conditioned by the times. Eventually the work evolved into small but charged objects that had broader sculptural and psychological meanings. I made bridges, coffins, and chairs, a few horses – all that work was loaded. At some point I made small figures, which I saw more as signs of psychological states. They worked as long as they were not about elation. Then I began to make larger work… All early work informs later work. The sense of size and scale, surface and mass. I don’t think anything you do ever disappears; it just gets absorbed in the next work.

AP: The two pieces we are showing at Chatsworth both seem to sit between figuration and abstraction – how important is the figurative aspect of your work? And how does it relate to the dynamic element of the sculptures?

JS: One is more about the interaction of two groups of forms and the other is about inversion. Both configurations are aggregates of recognizable forms. They definitely have a figurative bias, although there is tension between the elements and their summation. Much of my stuff is fractured and about the disjunction and conjunction of forms. The parts have no literal figurative meaning, however the sizes of them correspond with general experience.

AP: I'm really interested by your use of colour. You've said before that colour always has meaning in your work. Can you talk a bit more about the blue and how you feel colour interacts with form in your sculptures?

JS: Bronze, stone, and wood all have their inherent, physical properties– weight, mass, texture, colour. Paint on the other hand is a mask; it envelops and denies material and can condense form. The form retains its structure, but the material is denied. Perhaps paint is more culture, a bit less nature. Dense pigment concentrates the form in relation to diffuse nature. But blue of course also refers to the natural world – the sky, water.

AP: When you set out to create a sculpture do you begin with a clear idea, or is that something that develops as part of your creative process?  Could you outline how these two works came about and the mechanics of creating large-scale bronzes?

JS: Generally I do not have a preconceived idea. I know what I've done and begin to put stuff together. It is very playful but not always fun. You put stuff together and tear it apart. You're looking for a small degree of rapture. That is the satisfying aspect of making art. It does not always translate. Eventually I might make the configuration larger in wood or as a pattern to be cast. Size is a subsequent choice. For the works at Chatsworth, the wood patterns, which were subsequently cast to make the bronze, were made in the studio using slabs of wood that were cut off at a saw mill from much larger patterns. The tool marks, the saw kerf, refers to a much larger-scale tool than the form would permit. That sort of amplification of surface was important, particularly in the horizontal work.

AP: You've spoken a lot about how your works relate to the spaces that surround them and how you've sought to liberate them from these spaces. At Chatsworth your works are placed in the context of a natural – albeit cultivated – environment. Do you think this alters their relationship to their surroundings? And does the physical setting of your works impact the way the viewer experiences them?

JS: Hardscape or landscape, it is really a question of placement. I thought the blue work looked fabulous at the end of the allée of trees. Organised space is particularly suitable for sculpture; it allows you to focus on the experience and the thought behind the form. At some point in the mid-70s my dear friend Max Gordon, the architect, took me on a tour of Capability Brown gardens. He thought it would interest me because at that point my work was so much about an unexpected reduction of scale. I'm a huge fan. I can't wait to see the work at Chatsworth.

Joel Shapiro will give a talk on his work at Art Out Loud at Chatsworth House on Saturday 23 September. You can book tickets here. 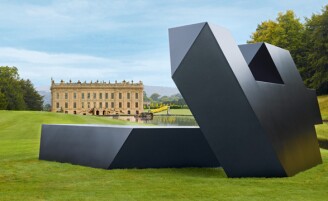