A merican realist painter Jamie Wyeth, the talented son of Andrew Wyeth and grandson of N.C. Wyeth – both hugely successful artists in their own right – is often associated with his work in rural parts of Pennsylvania, Maine and Delaware where he would capture the landscape and the people who lived there. Perhaps less well-known is Wyeth’s time in New York in the 1970s.

Then in his late 20s and early 30s, Wyeth was introduced to Andy Warhol through photographer and socialite Peter Beard. In 1976 the two would exchange portraits of each other and over the ensuing years, Wyeth took up residency at Warhol’s Factory on two occasions. The two artists exhibited together in the summer of 1976 at Coe Kerr Gallery and reviewing the show at the time, the New York Times said:

IT MAY or may not be true, as George Orwell believed, that every man gets the face he deserves at the age of 50. but it is undoubtedly true that certain faces sooner or later—exactly when depends on the vagaries of publicity—get the portraits they deserve.

This particular form of pictorial justice has now been meted out to both James Wyeth and Andy Warhol who, in a rare display of mutual self‐sacrifice, have submitted to the ordeal of having their portraits painted by each other.

Though a far cry from the rural lifestyle of Jamie Wyeth’s youth, his sensibility as an artist remained very much unchanged. In contrast to the immediacy of Warhol’s silkscreen portrait, Wyeth’s painting – watercolor, gouache and pencil on paperboard – is deliberate and sensitive, capturing the Pop superstar with all his vulnerability laid bare, his beloved pet Dachshund, Archie, sitting on his lap.

“Archie meant a huge amount to Andy. He carried that dog everywhere, even to Studio 54! So he became Andy personified, without the makeup and the wig.”

At the exhibition, Warhol learned that the show was already a success with some half of the works having already been sold. Always good for an incisive and memorable comment, Warhol said, “I think it’s because Jamie looks like a soup can.”

Jamie Wyeth's Andy Warhol Sitting with Archie (No. 9) is a highlight of the upcoming American Art auction, now open for online bidding in advance of the live auction on 19 November 2019. The auction will be on exhibition in Sotheby's New York galleries from 16–18 November. 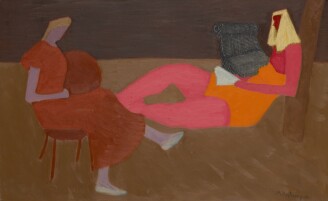