L ocated in one of the distinguished foreign style buildings on Shanghai's Bund, Shanghai Gallery of Art relaunched in September 2019 with an exhibition of 69 Chinese artists. Entitled 'Pal(ate)/ette/' the show evoked the cosmopolitan hedonism of Republican Shanghai and shidaiqu, the sensual fusion of imported jazz and local folk music. At the opening, there were both Chinese pastries and French wine. Facing the entrance was a large painting Silver Bowl (2017) by Shi Zhiying. The empty bowl rendered in shimmering mauve hues and ash greys acted as a rejoinder to the excess and voluptuousness of the surroundings.

Shi's painting was originally intended to be part of a concurrent exhibition. Across town, a two-person show Relative Distance featured the works of Shi and Lu Dan at the Shanghai Oil Painting and Sculpture Institute (SPSI). Here Shi's Silver Bowl would have been encountered in a different context: aesthetic, cerebral, and temperate. At SPSI openings, there is sobriety, speeches, and seminar.

The private museums, commercial galleries, art fairs, and auction houses that dominate the art world of Shanghai have a short history. The art economy has only recently mushroomed. Associations and academies, such as SPSI, had in the past played an important role in supporting artists. Some were sustained through the years, widely represented as cultureless, from 1966 to 1976. They produced official art, including the masterpiece of the times, Shen Jiawei's Standing Guard for Our Great Motherland (1974).

In the ensuing decade from 1979, vanguard groups, such as The Stars, The Pond Association, or Xiamen Dada, assumed this model. Independent artists engaged collectively in ideological discussions, and in the absence of galleries, they found audiences in fellow members of the association, family and friends. Spectacle was presented in public environments, following the example of itinerant groups eliciting community interaction during the Cultural Revolution.

Founded by individuals and corporations, Shanghai private museums have been guided by the predilections of their benefactors or by the opportunities available through negotiated cultural exchange, often through the sponsorship of foreign national agencies. Some, such as Yuz Museum and Rockbund Art Museum, favor an international mix, mainly incorporating Chinese artists endorsed by international recognition. Others, such as Long Museum and Minsheng Museum, show Chinese art that has received less exposure abroad.

Contemporary Chinese art shown internationally emphasize divisions, remoteness or inclusion. The themes focus on the individual against collective, or quaint vernacular tradition opposed to hectic progress. Two recent examples are The Guggenheim Museum’s 2017 show Art and China after 1989: Theater of the World and the Los Angeles County Museum of Art’s The Allure of Matter: Material Art from China currently on exhibit.

In recent years, institutions within China have increasingly shifted their focus to promote experiences and sensibilities that are particularly Chinese. For those who hold a more nationally-focused view, the figure of the émigré, who leaves motherland to embrace an outside perspective, stands in opposition to Chinese Chinese art.

The 2018 exhibition Art History Shaped by 40 Artists at the Powerlong Museum, Shanghai, dramatized the distinction. Addressing the period from 1978 to 2018, the show compared varying responses to Chinese affairs. Artists who had garnered international validation, such as Wang Guangyi and Cai Guoqiang, were placed alongside those, such as Luo Zhongli and Shang Yang, who had built their reputation in China.

Three successive exhibitions, from November 2017 to July 2018, at Ming Yuan Art Museum documented avant-garde art in Shanghai from 1979 to 2010. Through this lens, innovation appears in a continuum with modernity in the Republican era, rather than fissured by political revolution. This perspective suggests national stability, and not the activism and diaspora prominent in international shows. The exhibitions accord equal weight to the influence of realist practices in Russia and Eastern Europe, as well as abstraction in Western Europe and the Americas.

The only shadowy reference points were two exhibitions: Fuck Off, staged by Feng Boyi and Ai Weiwei in Shanghai in 2000, and China/Avant-Garde Exhibition in Beijing in 1989. These are often the touchstone of radical Chinese art in foreign accounts, ratifying a well-worn narrative in which insular Chinese artists at the close of the Cultural Revolution become rapidly exposed to an uncontested history and theory of art, where art embodies transformative social conscience.

Avant-Garde Shanghai at Ming Yuan Art Museum took a thematic approach, revealing the conference of diverse artists around the continuance of long-term involvements, for example in calligraphy, and germane to materials such as ink and Xuan paper—seen in the work of Gu Wenda and Qiu Deshu. Other themes played out against the background of collective organization, highlighting performance and other conceptual practices, apparently flourishing in parallel to the broadcast initiatives of Alan Kaprow in the 1960s, the commentary of Lucy Lippard in the 70s, and 90s conceptions of relational, and new-genre, public art.

Art auctions only started in China in 1991. In this period before commercial galleries, bids would set the price of an artist's work. Government policy was behind the seemingly impetuous growth of Shanghai's art world, with the momentum to spawn around five new art museums annually. The current Thirteenth Five-Year-Plan amplifies the previous equivocal wording: “Cultural establishments and pursuits should be promoted with more vigor.” It details a new phase “to promote a wider spread of Chinese culture abroad” and “the development of public culture services, the cultural industry, and the cultural market.” 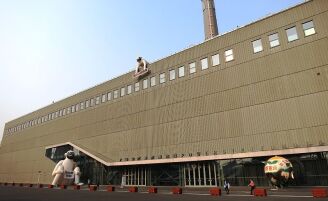 In the exhibition, Yang Zhenzhong's CC gallery (2004), featured reproductions of well-known contemporary artworks. These were downloaded from the internet in low definition and printed out to the dimensions of the originals. Cheap and inexact, they were for sale in unlimited editions. Yang highlighted the connection of art to provenance, and disrupted the bond between quality and value. The work is both an ironic and earnest premonition of President Xi Jinping’s 2014 speech which expressed that “market value must be subservient to social value."

As the art world becomes increasingly globalized, art institutions in Shanghai have emerged in two distinct mindsets, separating those who celebrate and promote specifically Chinese experiences against those who seek international validation. In one group, collectors and institutions embrace artists whose work barely have exposure outside of China but express sensibilities that inevitably intercede with values of Chinese society as a whole. Others prefer to view Chinese contemporary art through the lens of integration in the existing international canon. The relatively recent and impressive growth of Shanghai's art world have engendered discussions on its standing vis-à-vis well-established international art centers. However, its importance may be in its unique position as a microcosm of China's contemporary art world. If this is the case, then Shanghai and the diverging perspectives in its art scene would be worth watching.