Inside the Most Curious Shop in SoHo

NEW YORK – Federico de Vera's eponymous SoHo store, full of historical, carefully selected curios ranging from 18th-century religious figures to Victorian insect samplers, resembles a museum – with a key difference. "You can touch and buy what's on display," says de Vera. "How many times have you gone to a museum and thought, 'I wish I could inspect it?' In my shop, like at Sotheby's, you can actually have these objects." Since opening De Vera, he has also turned his curatorial eye to designing exhibitions (including four for the Neue Galerie), publishing books that illustrate some of his all-time favourite pieces, and creating his own line of jewellery that – fittingly – incorporates antique objects. Ahead of the upcoming auctions Collections & Curiosities: Silver, Ceramics and Objects of Vertu and Collections: European Decorative Arts, we spoke with de Vera about his own curiosity as a collector, the appeal of historical items and why you should never settle.

How did you first develop an interest in antique objects and objets d’art?
I was always interested as a kid. Growing up in the Philippines we had a beach house, and every weekend I’d collect twigs, shells and other stuff that I found. I liked to glue them together and make something. My parents were very interested in antiques. Through that I became curious about the history of objects, where they came from and why they were made.

How did collecting become a profession?
When I moved to San Francisco from the Philippines I started working at Japonesque, a gallery that sold Japanese art and objects. Everything there was very beautiful. It was about the idea of only selling things that you like and not compromising. You know when really good shops have an interesting point of view, but then they start selling stuff because they’re selling a lot of it? They become commercial. I judge things according to my standards. But I don’t try to box myself into just one culture or one look. My taste ranges from Egyptian to Baroque to contemporary.

The objects found at De Vera are incredibly diverse. What do you look for when you’re selecting them? Is there a factor or quality that they have in common?
Whenever I look at something I apply the beauty standards of scale, colour – all of those things. It’s uncompromising. It has to pass the test – just like when you’re looking for someone to date. I’m very exacting. When you have to say, “It’s good enough,” that means it’s not good enough.

When you walk into De Vera, it really is like walking into a still life. How do these objects relate to each other?
They tell a story as a group, whether it be a story of form or history. It’s an exhibition basically.

You’ve done exhibitions for the Neue Galerie, and have one coming up at the Ayala Museum in the Philippines. Do you approach curating De Vera in the same way?
Yes. When I place two objects together, I ask myself, what’s their relationship? It’s deliberate. It’s just like composing a picture.

How did you become interested in designing jewellery?
My mother loves jewellery. She collected and sold it. When I was maybe ten years old, she’d open her safe and I’d get to pick what she would wear whenever she’d go out. I’ve always been fascinated by beautiful stones. To me it’s important for jewellery to complement the person and not the other way around.

Could you talk a bit about your process for creating jewellery and how it relates to your interest in antiques? Many of your pieces incorporate found objects. My interpretation of that is that you’re giving them a new life.
Exactly. Whenever I do something, I try to use it in a way that nobody has ever thought about before. For example, Georgian shoe buckles; they’re huge. One day I said, what could I do with these? The form would naturally fit your wrist, so I turned them into bracelets. It’s giving a new life to old things. In a way, I think what I’ve done is influence people to look at things again. 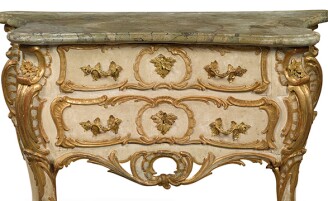