In Conversation: the Still Life Reimagined

JP: Allan and Lisa, you are both fine art specialists and historians with a keen interest in the art of the 20th and 21st Century. You have also had quite a bit of exposure to the work of Tiffany Studios in your roles as Sotheby’s Chairmen. What is it about the “Fish and Waves” lamp that immediately grabbed your attention?

AS: Where do I begin? I enter this discussion with a personal passion for Tiffany’s work, but even so, “Fish and Waves” is something else. It reimagines a “lamp” the way that Brancusi reimagines “sculpture.” There is no longer a base and a shade, but instead an exquisite holistic creation. The bronze “base” reads at once as roots of a tree, the organic formation of an oceanic mountain or wave, and pure energy coalescing into concrete form. It gives rise to what I don’t think we can accurately call a shade, but instead a pictorial encapsulation of fish in a bowl of existence, light fractured upon the water that is both the gestural expression of the glassmaker and a portrayal of aquatic freedom in the globular shape of what otherwise would read as a form of capturing fish – a bowl. It is this seamless fusion of improbable opposites – solid bronze and translucent glass, abstraction and representation, the sculptural and the pictorial, domesticated and free – that fascinates me endlessly for distinguishing this work as being a best of its kind while also transcending its genre. I can’t help but see in it a spatial complexity that reads so naturally but is indeed as complex as the revolutionary plastic investigation of form and picture- making that defined the spine of a century of Modern Art, all in the form of a functional object – a lamp.

JP: More than any other leaded glass work by Tiffany Studios, this lamp incorporates so many formal visual elements—sculpture, pictorial representation, light, texture—and, on top of that, it also has utility. How would you categorize such a complex work?

AS: I think the word “art” is overused as a qualitative definer of excellence in any field, be it of painting, cooking, or architecture, for example. Like the artist Robert Irwin, who once said to me “even if I design my studio that doesn’t make me an architect,” I believe that artists produce art, chefs create food, architects build buildings, and each idiom has its highs and lows that cannot accurately be articulated by using the word “art” to distinguish excellence. So, while I don’t use the word indiscriminately, I can think of no more accurate way of identifying this “lamp” than as a total work of art. The fact that the sculptural, the pictorial, the framed and the illuminated are all explored in a functional object is part of the work’s sly brilliance. “Fish and Waves” is not pretending to be art, but it takes on the complexity of rethinking the pictorial and the sculptural that are fundamental to Modern Art, while doing so as an amalgamation of two genres that the era’s artists rarely joined. This is what I love in the best of functional objects—the brilliance of great art while maintaining the integrity of serving its core function.

“Fish and Waves” is not pretending to be art, but it takes on the complexity of rethinking the pictorial and the sculptural that are fundamental to Modern Art, while doing so as an amalgamation of two genres that the era’s artists rarely joined.

JP: All the aspects of this lamp culminate to create such a vivid, strikingly aquatic effect. Its greatest distinguishing feature is, I think, the use of the fish motif, which has been widely used throughout art history. How does Tiffany’s employment of the motif compare or relate to other depictions of fish in fine art? Is the “fish in a bowl” a Modern image?

LD: Indeed, the motif of the fish has been used throughout art from ancient times to the present. Early Egyptian funerary paintings of food, including fish, have been discovered in ancient burial sites, including in the Tomb of Menna. Goldfish were introduced to Europe from East Asia in the 17th Century, and appear in still life and memento mori paintings through the ages, albeit dead on a table with other edibles. However, the artist who is perhaps best known for using the subject of goldfish is Henri Matisse, who depicts them in his drawings, prints, and paintings with great frequency, starting in 1912. For him, they symbolized tranquility. He visited Tangier, Morocco in 1912 and took note of how the locals would gaze at goldfish bowls for hours in a meditative and contemplative spirit.

Contemporary artists like Roy Lichtenstein and Jonas Wood appropriate and quote Matisse through their depictions of goldfish. In Lichtenstein’s Still Life with Goldfish in particular, one sees him further abstracting the central image of Matisse’s Goldfish and Sculpture, 1912, rendering the water with cross-hatched strokes and the fish as two elongated red amoebic forms. This flatness is at odds with the fully sculptural lamp by Tiffany, which has an aquatic dimensionality more akin to fish in nature. Wood also channels Matisse’s depictions of goldfish bowls through his “Fish Pot” paintings. As seen in M.S.F. Fish Pot, #7, 2016, Wood paints his fish pot as a flat object, pushed to the boundaries of his canvas. Yet he plays with the illusion of the fishbowl in the way that he perspectively encircles the decorative fish and flora and fauna to the edges of the pot. The dynamism of color of his most recent Fish Pot paintings also refers back to Matisse, particularly his Red Studio.


AS: The fish in the bowl parallels a painting in a frame, life domesticated, and can perhaps be seen as surrogate portraits of the artist’s models. Lichtenstein mediates the fish in the bowl with a kind of artifice of life that mediates a step further by quoting Matisse. Whereas Matisse and Lichtenstein portray the fish flatly, like cut-outs, Tiffany’s glass “bowl” evokes the free movement of fish observed in an aquatic habitat.

JP: In a genius way, “Fish and Waves” manages to bridge sculpture and still life. Do you see this anywhere else in the art world?

LD: Perhaps the artist who comes closest to mirroring what Tiffany achieves in his “Fish and Waves” lamp is Alexander Calder, whose mobiles unify the pictorial and sculptural and who, like Matisse, explored the fish motif a great deal in his work. Take for instance Calder’s Fish and Water Weeds mobile, executed circa 1942. In this work, it is as if Calder draws in three-dimensions, representing fish and seaweed with simplistic, economical use of line. Whereas Tiffany animates his depiction of the same subject with light, Calder animates his with motion. Both interpretations are completely enchanting, and capture the experience of observing fish in nature or a fishbowl.

Whereas Tiffany animates his depiction of the same subject with light, Calder animates his with motion. Both interpretations are completely enchanting, and capture the experience of observing fish in nature or a fishbowl.

AS: Exactly. Tiffany freed the fish from the boundaries of a frame, and Calder liberated the fish from the glass, and in so doing, reimagines what had once been a still life that will never be still again, forever in motion, of material form and ephemeral light. In a sense, Tiffany’s “Fish and Waves” can be seen as a singular, rediscovered link in the history of the still life. 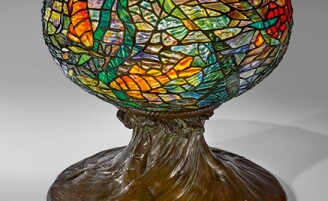