Handmade Stone Tools from the Voyages of Captain Cook

By Sotheby's
Sotheby's upcoming sale, Royal & Noble on 17 January , features two remarkable relics from the voyages of Captain Cook. Read on to discover more about them.

T his year marks 250 years since Captain James Cook’s arrival in Tahiti from his first voyage to the Pacific. For this occasion, events such as the recent Oceania exhibition at the Royal Academy of Arts in London celebrate the history and original art of Oceania. The two Tahitian adze blades offered within the Royal and Noble sale, at first glance, seem quite ordinary, but reveal a remarkable history intertwined with the historical voyages made by Cook.

Adzes were among the most important tools within Polynesia. They were used for all kinds of construction, including the building of canoes which long pre-dated the arrival of Europeans. Through the two documents accompanying the stones, we know that the present blades were used in the construction of a canoe for Cook while he was on the Island of Tahiti in 1769.

Cook had first arrived on the Island of Tahiti in April of that year where, along with his crew, he set up base at Matavai Bay with the attention of tracking the transit of Venus and to search for terra australis incognita, the Great Southern Continent. Cook visited Tahiti again on his two subsequent voyages, making anchor at Tautira Bay, sometimes known as “Cook’s Anchorage.”

Cook’s explorations captured, understandably, the attention and imagination of the European public and objects from his travels promptly entered a number of collections, including the British Museum’s, which expanded their ethnographic collection with items collected on Cook's second voyage (1772-1775.)

These stone tools offered in the Royal & Noble sale at Sotheby’s were given in 1807 to Walter Stevenson Davidson (1785-1869) by Queen Ideah, Queen of the Kingdom of Tahiti, alongside her husband King Pomare I. The Scottish born Australian Stevenson was a landowner, ship-merchant and banker. Governor Philip Gidley King saw him as 'a valuable Acquisition and Advantage to the Interests of this Colony', and thus appointed him a lieutenant in the Parramatta Loyal Association and granted him 2000 acres (809 ha) of crown land. Following many travels in Asia, he finally settled in Canton, from 1811, and became an agent for Baring & Co. By 1816, he was sole proprietor of Davidson & Co., importing opium and cotton and exporting tea and silver until 1822, when he returned to England.

These adze blades were then passed on to the remarkable Onorato Martucci (1774-1846), on May 22, 1819 while on a trip to Canton. The merchant, adventurer and collector Martucci was born in Rome, where his father, Joseph, was the Vatican's Minister of Commerce. In 1801, he left for his first trip to China which after touching the coasts of Brazil and Western India (Goa), led him to Macau. On his return in 1803, he extended his commercial practice in Portugal, Germany, France, Switzerland, Spain and England. In 1813, he became a commercial agent of the viceroy of Egypt Muḥāmmad Ali with the aim of establishing a new and direct trade between Egypt and the East Indies.

After his return from China, he had the intention of setting up a public museum to display his extensive collection of Chinese art, however, his plans fell through, and in 1842, he sold most of his collection to King Ludwig I of Bavaria (1786-1868), which provided the basis for the first ethnographic museum, The Five Continents Museum (formerly State Museum of Ethnology), established in 1862 in Munich.

It is probable that around the same years, Martucci also sold other items from his collection, as the stones were owned by Archduke Rainer of Austria, Vice King of Lombardo-Venice (1783-1853), a member of the House of Habsburg. Like many of his past family members, Rainer was an avid art collector and was particularly interested in collecting stones and minerals. Although no specific contact between Archduke Rainer and Martucci has been recorded so far, it is possible that they met through mutual relationships at the highest levels of Italian and Austrian society. 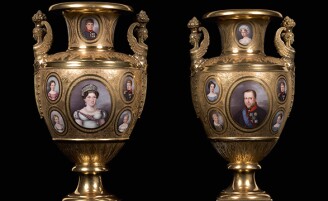