I have a motto,” declared the Greek art dealer Alexander Iolas towards the end of his life. “Grow forever, grow eternal”. It was an apposite slogan, for cultivation – both of talent and opportunity – remained at the heart of a hugely accomplished career that spanned four decades and several continents.

Iolas was a Renaissance man with a rebellious streak and a fondness for provocative costume. Like a trapper or a matador, he wrapped himself in raccoon and chinchilla furs and sweeping floor-length capes. Even his hair – a squall of jet-black locks - seemed defiant (“It has another constitution,” he joked).  And his theatrical appearance – perhaps unsurprising for an ex-dancer – dazzled the art world during the latter half of the 20th-century.

Iolas maintained that art was the only thing that interested him, a claim that wasn’t entirely true. Prior to his success as a gallerist he had been a pianist and a celebrated dancer on the ballet circuit. He also had a talent for friendship, maintaining close relationships with some of the most prominent cultural figures of the time, including Andy Warhol, Max Ernst and Rudolf Nureyev (with whom he danced in a Milanese street).

As an art dealer his achievements were many and varied: he helped introduce Surrealism to America, gave Andy Warhol his first show, championed Picasso’s later works and orchestrated an international network of galleries. From the 1950s through to the late-1970s, Iolas flitted like a glittering jay between these galleries - in New York, Paris, Geneva, Milan, Madrid, Rome and Athens - fostering the talents of artists such as René Magritte, Lucio Fontana and Claude Lalanne.

For Iolas, people, paintings, music and movement, were all of a piece with the dance of life. “Each exhibition is like the première performance of a ballet,” he told the art historian Maurice Rheims in 1965. “I await the audience, I perform. I don’t consider the gallery as a commercial occupation. It’s a purely artistic occupation. An exhibition has to be a ballet, decorated by Yves Klein, by Max Ernst. It’s a show in which the audience members are the dancers, and the scenery is made by the painter.”

He was born in Alexandria, Egypt, in 1907, into a family of wealthy Greek cotton merchants.  Although his parents wanted him to enter the family firm, Iolas defied familial expectations, recalling later that, “they could not take me away from the arts. I didn’t want to become a cotton dealer, not even a rich cotton dealer.”

An adventurous and wilful young man, he travelled extensively. For a period he played piano in Berlin, and then, in Paris, he pursued a career in ballet. It was here, aged 17, that he also became interested in art. While walking along Avenue Matignon one day, he was stopped short by a Georgio de Chirico painting hanging in a gallery window. “I was drawn to the picture as if by magic,” he recalled. He would later model for the artist.

In 1935 he arrived in New York, where he danced for George Balanchine, who earmarked him for La Traviata – “The most beautiful waltz in the world,” stated Iolas. Touring commitments with dance companies founded by Theodora Roosevelt and the Marquis de Cuevas took him around the US and to Europe and Latin America.

Retiring from dance, he launched himself onto the New York art scene in 1944, initially as the manager of the Hugo Gallery on East 55th Street. Founded by the doyenne of cosmetics, Elizabeth Arden, along with the heirs Robert Rothschild and Maria dei Principi Ruspoli Hugo, the gallery gained a reputation for Surrealist art.

Iolas staged pivotal exhibitions of new work by Ernst and Magritte, but also by Victor Brauner, Dorothea Tanning and Leonor Fini. But he was more than simply a dealer in Surrealism. In 1953 he staged Andy Warhol’s debut, Fifteen Drawings Based on the Writings of Truman Capote; some 30 years’ later he gave the artist one of his final commissions, a series of works based on Leonardo da Vinci’sThe Last Supper.

He also connected with the Pop sensibility of Ed Ruscha and the eroticism of Takis, giving shows to both. His eye was informed by intuition, he said, rather than commercial considerations. He simply “went mad” for some artists.

In 1955 Iolas set up on his own in New York, in partnership with Brooks Jackson, another former dancer, and over the following two decades he opened galleries across Europe. His professional achievements were often attached to extraordinary stories – possibly apocryphal – and a legend formed that was in part of his own making. It was said that he had married Theodora Roosevelt to attain a Green Card and that curls of his hair were made into false eyelashes for Marlene Dietrich.

He was not averse to delivering strong, sometimes random, often amusing, opinions: he dismissed Balthus and Cy Twombly as terrible painters and rhapsodized about the beauty of the Louvre pyramid. “My forte is to love the things I love,” he said, “and to hate the things that I hate.”

Such bombast was tempered by great generosity. Michel Strauss, former Head of the Impressionist & Modern Art Department at Sotheby’s London, recalls visiting Iolas in 1979: “He opened a drawer which was full of Cartier watches, pulled one out and gave it to me. He had a big drawer full of those watches, which he handed out to his friends like sweets.”

In later life, having closed all but his New York gallery, Iolas concentrated his energy on his home, a marble palace that he built in an unprepossessing working class suburb of Athens. It was, in a way, his last gallery, a domestic space filled with the art that he had loved throughout his career and furnishings that complemented his flamboyant demeanour.

Following a period of retirement, Iolas returned to New York, the setting of many of his greatest triumphs, and he died in Manhattan in the summer of 1987. The New York Times noted that he would be remembered as a dealer who could convince a client with “his hierophantic manner, his often sensational mode of dress and his mischievous and sometimes irresistible charm.”

Iolas, however, believed that growth was eternal, continuing on into the afterlife. “As for paradise,” he once noted. “That you decorate the way you want. It has very high ceilings and very high rent. I’ll wait to see what they have to sell there; it’s a big market.”

The Alexander Iolas sale is in London on 25 May 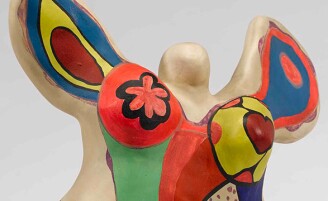