Glenstone, the Cultural Oasis that Integrates Art, Architecture and Nature

By James Reginato
After 12 years of curatorial success at Mitchell and Emily Rales’s Maryland museum, the couple have opened the Pavilions – an expansion that’s a fitting testament to their collection of contemporary art

“I like to say we are on a 30-year journey here,” says Mitchell P Rales about Glenstone, the not-for-profit contemporary art museum and foundation he co-founded in Potomac, Maryland. “I think we are about halfway there.”

He first broke ground on this 100-acre site of verdant, rolling pasture and woodland­ in 2003. One of America’s most successful industrialists, Rales conceived his vision for it after surviving a horrific helicopter crash in north-west Russia. He escaped from the scene barefoot, clad only in a torn T-shirt and gym shorts.

“I came home with a different point of view. I wanted to do something of lasting value,” he said recently.

Rales began hatching plans for a jewel-box-like 30,000 sq ft gallery building designed by architect Charles Gwathmey, a good friend, which would display his foundation’s burgeoning collection of art by the Abstract Expressionists.

“But I wasn’t yet married to this wonderful lady, so the ambitions were not at the scale they are today,” he explains, referring to Emily Wei Rales, a former curator at the Solomon R. Guggenheim Museum in New York and a veteran of the Barbara Gladstone Gallery and other leading contemporary art institutions.

Following their marriage in 2005, Emily helped hang the art in the Gwathmey-designed gallery, which opened to the public by reservation in 2006, and subsequently has been Glenstone’s director and chief curator through the seven major exhibitions it has mounted.

I love the sound of that gravel under your tyres as you drive in. It should make you feel a little different, more relaxed, so that when you park in the grove, your stress stays in the car.

Emboldened by their initial successes, the pair grew even more ambitious. “We decided to embark on a journey to really do this the right way,” Rales says.

That is an understatement, as anyone who has visited the newly opened major expansion at Glenstone will know. It encompasses a 204,000 sq ft museum building known as the Pavilions, amenities including two cafes, a book store and arrival hall, and an additional 130 acres of landscape.

Most thrilling of all is the collection that the Raleses have been quietly building over the past decades. Though they are among today’s most important collectors of post-war and contemporary art – Earl A Powell III, director of the National Gallery of Art, Washington, calls them “the paramount collectors of their generation” – they are among the least well-known, by their own choice. Preferring privacy, they rarely speak to the press or attend the typical art-world circuit of openings and parties. The Wall Street Journal described them as “the most influential art collectors you’ve never heard of”.

During a meeting at Glenstone over the summer, as construction work neared completion, Mr and Mrs Rales showed themselves to be extremely passionate and serious about art, as well as gracious. Mitch, as his friends call him, was particularly excited that day to see and hear the gravel being laid in the winding, tree-lined road leading to the arrival hall. “I love the sound of that gravel under your tyres as you drive in. It should make you feel a little different, more relaxed, so that when you park in the grove, your stress stays in the car,” he says.

“We’re trying to go backwards in time,” Emily says. “Everything today is so fast-paced. We want people when they get here to slow down, turn off their phones, take it all in.” “Your blood pressure should drop when you arrive,” Mitch adds.

The Pavilions, the centrepiece of the expansion, is a triumphant but highly understated, contemplative building, designed by Thomas Phifer, whom the Raleses selected from an initial field of 26 architects after Charles Gwathmey died in 2009.

Embedded into a rise in the landscape, it is composed of a series of cast-concrete structures, reminiscent of a traditional hill town. Inside, a ring of gallery rooms surrounds a large central water court.

Outside, PWP Landscape Architecture, which has worked with Glenstone since the museum’s inception, developed an integrated plan for the expanded property, transforming the landscape into an immersive experience for visitors, with walking paths, bridges, restored meadows and woodlands.

“We are aiming for a seamless integration of art, architecture and nature,” says Mitch. “We think that’s pretty unique. Lots of places do two of the three incredibly well – but it’s very hard to find all three together.”

Glenstone’s exhibitions and installations are drawn from the museum’s own collection, which focuses on the period after the Second World War and features some of the finest works produced by artists such as Jackson Pollock, Mark Rothko and Andy Warhol.

“We strive to collect works that changed the history of art, and even what our ideas about what art can be,” Emily says.

The Raleses prefer to collect artists in-depth, which they believe is “increasingly important” as “artists are working in different mediums”. “So, to accurately represent them you need to collect in-depth to flesh out an artist’s vision,” Emily says.

The couple has assembled the largest individual holdings of works by such major artists as Louise Bourgeois, Roni Horn, Eva Hesse, Jeff Wall and Martin Puryear.

Inside the Pavilions, Glenstone collaborated closely with several artists (or their estates) – including Michael Heizer, Charles Ray, On Kawara, Brice Marden, Bob Gober and Cy Twombly – who will each have rooms dedicated to their art.

Marden’s room features his only commissioned work. “He was a fan of the Rothko Chapel. And we said, ‘We’re going to give you the opportunity to create your own chapel’,” Mitch says.

In the case of Charles Ray, the plan is for him to conceive of a different selection and arrangement of his work every two years. Since Glenstone has the largest and most comprehensive selection of his art anywhere, the opportunities are staggering. “He has been thrilled to visit often, to think about the possibilities. This gives him an opportunity to look at his work from a new perspective,” Emily says.

Another gallery room features nothing but a large window – offering simply a vista onto the serene landscape. “It’s like a halftime how,” says Mitch. “It will give people a chance to refresh. We are trying to create an experience here that you can’t get anywhere else.” 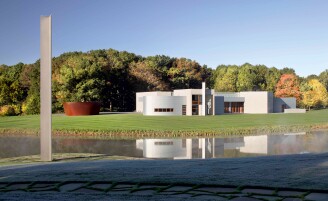