The advent of paper production in 2nd-century China opened up a means of visual and written communication heretofore unprecedented, and for centuries artists have continued to push the seemingly endless limits of the material. Paper manufacturing became firmly established in 15th-century Europe, with its widespread use for manuscripts and prints, and, for many artists, also as a preparatory tool for paintings and sculpture. These works on paper provide insight into the artists’ creative processes and are vital art historical documents, often serving as visual records for works now lost or destroyed. Although Old Masters rarely signed their drawings because they were not viewed as finished works, this notion was discarded at the outset of the 20th century when paper became not just support, but rather a medium itself. The amalgamation of uses, materials and techniques artists have explored throughout time testifies to the importance and versatility of paper as an artistic tool.

The great modernists of the 20th century were no foes to multimedia experimentation, but for some artists, such as Edgar Degas, executing works on paper was considered a more personal experience than working with canvas. Degas's Trois danseuses debout près d’un portant is a beautiful, intimate rendering of one of his favorite subjects: the quiet rehearsals of ballet dancers. The subject of the dance reigned supreme in Degas's œuvre, accounting for about three-quarters of his production during his late career. "The dancer is only a pretext for drawing," Degas declared to George Moore (quoted in Richard Kendall, Degas: Beyond Impressionism [exhibition catalogue], London: The National Gallery, 1996, p. 134). The artist’s obsession with drawing had become all-consuming. "The sheer labor of drawing had become a passion and a discipline for him," Paul Valéry wrote, "the object of a mystique and an ethic all-sufficient in themselves, a supreme preoccupation which abolished all other matters, a source of endless problems in precision which released him from any other form of inquiry" (Paul Valéry, Degas, Manet, Morisot, Princeton, 1960, p. 64). When comparing Trois danseuses debout près d’un portant and others of Degas's late period with those of previous decades, one instantly observes that the artist has largely dispensed with his early penchant for specificity and detail. He attains instead a lyrical expression of rhythmical form that verges on abstraction, most clearly evident in this work in the sweeping blocks of color of the dancers' tutus. Color became for Degas the revelation of prismatic essence, surpassing anything to be found in Impressionism at that date: as if he was drawing with light itself.

Pablo Picasso also regarded paper as a highly personal medium, particularly during experimental fazes of his œuvre. He would fill notebooks with different iterations of a theme, and during the early 1900s, these primarily consisted of poignant images of forlorn men and women lost in thought. Rather than hiding reality behind realistic or academic stylizations, Picasso fully embraced the destitution, misery and grief of life in the modern European city. In Tête de mendicant, executed in 1903 at the height of his Blue period, Picasso masterfully and intimately conveyed his figure's sorrow. Picasso deftly created a shadow of the man's profile with the same brushwork he used to define the man's face and shield the eyes that struggle to see, slowly merging figure with space. With his neck craning forward, the figure's loosely defined robe gradually dissipates into the ethereal space engulfing him, creating a palpable anxiety that is particularly acute because of the seeming delicacy of the paper. As explained by Pierre Daix, works on paper were the ideal demonstrative vehicle for Picasso: "His modernity does not depend upon his subjects, even if he sometimes gives them a touch of his contemporary reality, nor upon the deliberate boldness of his draughtsmanship, which always aims to invest the subject with the maximum expressive intensity rather than to assert itself. Nothing is further from Picasso than art for art's sake. Drawing is a medium with its own rules, an instrument capable of capturing and expressing the external world. This world is a new and modern world and must find expression in an appropriate style, in harmony with the men of the time" (Pierre Daix & Georges Boudaille, Picasso, The Blue and Rose Periods, A Catalogue Raisonné of the Paintings, 1900–1906, Greenwich, Connecticut, 1966, p. 65).

Fernand Léger chose to use paper as the medium for his revolutionary series Contrastes de formes, which is considered to be his most important contribution to 20th-century art. In this 1913–14 iteration of Contrastes de formes, Léger experimented radically with the plastic qualities of form, line and color, replacing basic components of the human anatomy or landscapes with geometric shapes and retaining only two crucial elements of traditional visual representation: the construction of pictorial depth and the modelling of form using light and dark. In the works on paper, such as the present sheet, the rejection of color further enforced the radical nature of his technique, in a similar way Picasso and Braque had in their analytical cubist works.

Though absorbing the surrounding ethos and aesthetic advances made by his contemporaries, Joan Miró maintained a singular voice as he continued to aggressively challenge the conception of what constitutes a work of art. In works such as Sans Titre (Composition avec un poène de Carlos Franqui), executed with colored crayon and marker on paper, Miró's Dadaist roots are evident in his presentation of poetic word fragments. During the 1970s, Miró completed several projects with the Cuban poet and journalist Carlos Franqui, who acted as an unofficial cultural ambassador for the Cuban Revolution in Europe from 1963. By combining his surrealist lexicons with the presentation of words, Miró underscores the notion of the randomness for the shapes upon which we base all of our communications, thereby concurrently questioning assumptions of art and language.

Like Picasso and Miró, Alberto Giacometti excelled in each of the major media – drawing, painting and sculpture – from early in his career but never subscribed to a hierarchy among these forms of expression, even opining that "one has to focus uniquely and exclusively on drawing. If one could master drawing, everything else would be possible" (as quoted in James Lord, Dessins de Giacometti, Paris, 1971, p. 26). In the manner of classical masters before him, Giacometti's practice combined drawing, painting and sculpture and centered on his exploration of the human figure. Works such as Tête d'homme exemplify the intensely introspective and exploratory genius of his skill. For Giacometti, technical finesse was the instrument used to capture reality on the page or canvas. Tête d'homme materializes from a frenetic nest of lines and curves, revealing Giacometti's distinctive formal technique extracted much of the same sparse vigor as his sculpture.

Marc Chagall also created major works in almost every artistic format, but many of his most experimental works were executed on paper. L'Ane au violoncelle ou Cirque au soleil ou Variante du "Cirque sur fond noir" is a beautiful example of the artist's career-long dedication to experimenting with various tools and reconfiguring the familiar characters of his distinctive visual vocabulary: a miniature bird, an over-sized cockerel and a cello-playing goat. Audience members are softly denoted in the background as mute observers. By contrast, the vibrancy of the circus floor is rendered in light brushstrokes and a bold palette that sees hues of red, green, blue and yellow fluently combine. On the verso of the work is a sketch for one of Chagall's largest and most important works, La Commedia dell Arte, from 1958.

This use of the verso of the paper – as well as the paper itself – to sketch an idea for a work of more substantial size was extremely common, and with close examination one can observe the artistic process at play. Henry Moore was a prolific draftsman and would choose which sculptural projects to pursue from his preparatory sketches. These highly detailed studies stand as evidence of a precocious talent and reveal Moore's working methods. Three Seated Women exemplifies the highly important technical and stylistic developments Moore achieved in the 1940s. During World War II, Moore executed what are arguably his greatest and certainly his most publicly recognized achievements as a draughtsman: the Shelter and Coal-Mine drawings of 1940 and 1942, executed in the London Underground and the pits at Castleford in Yorkshire, respectively. According to the catalogue raisonné for the artist's drawings, Three Seated Women was originally conceived as a study for a stone sculpture: "In a note on the verso of an early photograph of this drawing Moore has written 'drawing for group life size to be translated into stone.' Although no sculpture exists, an upright version of three draped figures LH 268 was carved in 1947–48. Characteristic of Moore's drawing are the feet placed firmly upon the ground, a pose he associated with the frescoes of Piero della Francesca in the church of San Francesco at Arezzo" (Ann Garrould, ed., Henry Moore, Complete Drawings 1940–49, London, 2001, vol. 3, no. AG 42.193, p. 168).

Unlike Moore, Jacques Lipchitz rarely produced works on paper as final pieces in their own right, but the extant ones are inventive demonstrations of his sculptural eye. Composition cubiste is an exceedingly rare flatwork by Jacques Lipchitz and a skillful translation of his unique Cubist sculptural language onto paper. The solidity of the firmly locked overlapping planes of color lends the figure a three-dimensional quality, which is enhanced by Lipchitz's choice to allow the light brown of the medium to penetrate through the gouache and pencil. By the time he executed this work in 1918, Lipchitz had succeeded in defining a Cubist language in sculpture that effectively transformed the tenets of this seminal movement into his dominant medium.

The intimacy of the small size of a work and the freedom to experiment was embraced by Jackson Pollock's avant-garde abstract expressionism. When Jackson Pollock developed his signature drip technique in 1947, he sought to move the locus of aesthetic interest from viewing how the artist sees the world to an interaction between what one sees and oneself as the seer, thereby implicating the viewer in the process of understanding the work of art. It was in 1949 that Pollock experimented further with this communication among artist, viewer and self by painting in a more intimate scale via paper. He executed a limited number of paintings on paper, with only eight of these works featuring the aluminum paint that lends Number 32, 1949 work its captivating presence. The smaller scale of his medium allowed Pollock to more closely investigate the subtleties of his artistic practice: chromatic nuances, the vigor of his gestures, the density of his paint and the way the many layers of paint coalesced in the final work. 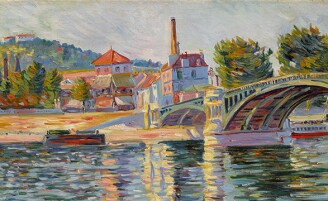