From the Streets: The Rise of Urban Art

“F ire will attract more attention than any other cry for help,” said Jean-Michel Basquiat, crowned as one of the father figures of the Urban Art movement. Putting Basquiat’s claim in the context of Street Art, what better canvas to start a chromatic blaze than the walls and corners of thoroughfares where high-level of attention may be guaranteed from the frequent flow of the urban populace?

Beginning to be recognised during the 1970s, street art as a creative practice stemmed from a prevalent graffiti community which began adorning streets around the globe, often without permission, in forms of wheat-paste posters, stencil art and text-based social commentary. This form of expression is not dissimilar to a tradition dating back to the early 16th century when anonymous satirical poems or witticisms were attached to the base of the talking statues of Rome as an outlet for unwarranted social and political opinions. These statues were located in the most populated and frequented piazzas and streets across the city where citizens congregated and dispersed, and along with them the latest gossip of the papacy and atrocity of the government epidemically disseminate.

STATUE OF PASQUINO, ONE OF THE TALKING STATUES OF ROME, NICHOLAS BEATRIZE, ENGRAVING, PUBLISHED AFTER 1582

Unlike the authors caught posting pasquinades back in Early Modern Rome, artists today are less likely to risk losing their hands or their head for expressing themselves in the urban landscape. Occasionally, Street Art faces condemnation of various degrees when it falls into the grey area between artistic expression and vandalism. This dichotomy is well illustrated by the arrest of the street artist Zevs in Hong Kong in 2009 when he painted a “liquidated” Chanel logo on the wall of the Giorgio Armani flagship store to reflect the war of brands, a creative act that was ultimately deemed unwelcome.

Nevertheless, Street Art has become an accepted artistic genre and is increasingly embraced by the general public as well as institutions. Some of the great names in contemporary artl, such as Jean-Michel Basquiat, Keith Haring and Kaws, trace their career roots back to their creative output on the streets. Not only are their works included in major museum collections around the globe, they are also much sought after by seasoned and new collectors alike.

One of the most significant effects brought about by the rise of Street Art is the redefining of the public’s perception of what is art. By taking art to the streets, artists have liberated art from the confinement of gallery walls and subsequently transformed the public’s understanding of where and how to view art. For instance, the artist Invader is best known for “invading” public spaces by plastering his signature mosaics on the urban fabric. His works encouraged the public to be more vigilant towards their living surroundings which can be rendered as artists’ creative grounds at any time. In addition, the artist recreates small replicas of his street mosaics. These gallery pieces are set in Perspex and accompanied by a certificate detailing the placement of the original. By introducing art that sprouted from the streets back into the gallery space, Invader is further testifying the increasingly permeable boundary between the two spaces, as well as the public’s accessibility to art.

Francisco Rodrigues da Silva, also known as Nunca, is another artist who renders the urban space his canvas of creative output. A Sau Paulo native, Nunca dedicates his works to exploring the past and present Brazilian culture through the incorporation of indigenous figures in his boldly coloured compositions to confront the modern landscape. In 2008, Nunca and five other internationally acclaimed artists known for their street art practice, including Os Gêmeos and Faile, were commissioned to adorn the river facade of Tate Modern in London as the first major public museum display of street art in London. The exhibition brought to the fore an important aspect of “Street Art” as a dated terminology. While the artists mentioned above are widely known as “street artists”, they continue to work in the traditions of artists before them, creating works on paper, canvases, and sculptures, as opposed to limiting to murals and text-based graffiti.

Not only has street art been integrated spatially into people’s everyday lives, they also manifest in forms that are closely related to our daily tactile experiences with objects. Using materials collected from the streets, things such as scraps of cardboard, posters, spray cans, plaster fragments and broken glass, to name but a few, artists have renewed the viewing public’s attention to things that are easily disregarded in the midst of the urban hustle and bustle. The resulting artworks are not only hard to categorise but also act as catalysts that further blur the boundary between the high and low art.

Capturing the momentum of Street Art’s growing popularity, Sotheby’s London hosted the first retrospective of works by the internationally renowned artist Banksy in 2014. Two years later, Sotheby’s Hong Kong partnered again with legendary Street Art dealer Steve Lazarides in a curated selling exhibition titled They Would Be Kings, which displayed works by the world’s most prominent urban artists. Recently in June, Sotheby’s New York teamed up with Fat Free Art Gallery and invited a group of well-established street artists to reinterpret Master paintings from the 15th to the 17th century that were offered at auction. This December, Sotheby’s Hong Kong is delighted to present TAKE IT TO THE STREETS, an auction in partnership with Hong Kong Contemporary Art Foundation (HOCA) to raise funds for their upcoming exhibitions, events, as well as education programme. The auction will feature 32 works donated directly by 29 artists that display traits of Street Art in various media and style. 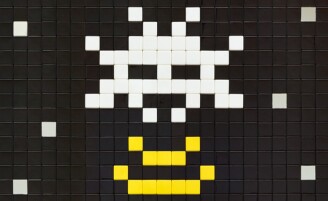