From Stage to Studio: The Double Life of Sarah Bernhardt

S arah Bernhardt was arguably the Meryl Streep of her day. Celebrated as the world’s greatest actress during her lifetime, Bernhardt had achieved legendary status by the early 20th century. Her fame has since lived on, inspiring countless biographies with vivid details of her extraordinary life and personality.

Surviving marbles by Sarah Bernhardt are exceedingly rare on the market. It is exciting therefore that Sotheby’s sale of 19th & 20th Century Sculpture presents a recently discovered, seemingly unique marble bust by the artist.

Born in Paris to a courtesan and an unknown father, Sarah Bernhardt received her first training as an actor at the Comédie-Française. She soon found unprecedented fame across Europe and beyond, enjoying several worldwide tours during the 1880s and 1890s. Known in particular for her magisterial portrayals of tragic characters, Sarah Bernhardt’s career continued into the early 20th century, when she starred in silent films and remained active on the stage until her death in 1923. Sarah Bernhardt was as flamboyant a personality off the stage as she was in her dramatic roles. Famously, the actress acquired a coffin in the 1860s, in which she would regularly sleep.

Bernhardt’s sculptural activity began in the 1870s with guidance from established sculptors. Taking a studio in 1873, she went on to model a number of highly accomplished works, many of which she exhibited at the Paris Salon and beyond – in 1879, her sculptures were shown in London to great acclaim.

Despite her overall success, Bernhardt faced some difficulty in her early career as a sculptor. Not only was she one of few women active in the profession at the time; as an established actress, she was particularly vulnerable to scepticism about her talent and commitment. Posing confidently for photographs in front of her works, holding a chisel, Bernhardt was derided in certain papers for wearing a white trouser suit, a transgression of feminine dress codes.

When she exhibited her first figural group, Après la Tempête, at the 1876 Salon, she met with both acclaim and doubt, related in Bernhardt’s 1907 autobiography:

“Is there any need to say that I was accused of having got someone else to make this group for me? I sent a summons to one critic. He was no other than Jules Claretie, who had declared that this work, which was very interesting, could not have been done by me. Jules Claretie apologised very politely, and that was the end of it.” (My Double Life: Memoirs of Sarah Bernhardt, London, 1907, p. 278).

Bernhardt was vindicated by the Jury’s decision of awarding her an 'honourable mention', making worthwhile her painstaking study of the human anatomy. Like Ophelia, the bust in July’s sale represents a dramatic character, Hermione. A heroine from Greek mythology, Hermione appears in Jean Racine’s 17th-century play Andromaque, in which Bernhardt starred as the title character in 1873 – it was not until 1903 that she appeared in the role of Hermione.

In her memoirs Bernhardt raves about the actor Jean Mounet Sully’s portrayal of Orestes in the 1873 run, and it appears that this inspired her to create the bust. Near the end of the play, Orestes, in love with Hermione and indirectly responsible for her suicide, is overcome by madness and sees visions of Hermione accompanied by the Erinyes, the vengeful female deities of the underworld. He exclaims: ‘Who’ll meet those snakes that hiss above your heads?’

Bernhardt presents Hermione as a fiercely frowning girl with wings in her hair and a pair of snakes writhing above her head. Her powerful gaze is intensified by the extensive hollowing of the pupils and broad delineation of the eyebrows.

Bernhardt made sculpture her second profession, pouring her passion for the theatre, her personal experience, and her penchant for all things dramatic into her highly creative artworks. This unique sculpture is a physical testament to Bernhardt’s dazzling personality. 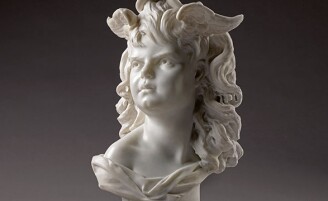