I n the summer and fall of 1952, Francis Bacon painted a series of six small portrait heads. Study for a Head, 1952 (catalogue raisonné 52-07) is one of the two largest at 26 x 22 inches and the one most clearly identified as a “papal portrait” by the inclusion of the purple cape (Mozzetta) and white spread collar. In the reduced format of these serial portrait heads, Bacon experimented freely with the application of thick and thin oil paint, brush size, color and hue. In our painting he even mixed sand into the paint applied to form the right side of the open mouth. It was a time of confident expression in crafting likeness through distortion and in wedding photographic blur of figural motion to static setting. But one must ask why the screaming pope? Why the shattered pince-nez? Why the golden yellow brass bed frame?

It is well documented that early in his career Bacon was obsessed with Velázquez’s famous 1650 Portrait of Pope Innocent X. He had painted a variant of that masterpiece as early as Head VI of 1949. Yet this exceptional mid-sized portrait of 1952 is a prescient experiment which forms a bridge to Bacon’s most famous Study after Velázquez’s Portrait of Innocent X of early 1953 as well as to the extraordinary series of eight large papal portraits — the longest series of his career — which Bacon painted in a two-week marathon in July of the same year.

Bacon’s many papal portraits were originally inspired by Diego Velázquez’s extraordinarily lifelike portrait of a powerful and unscrupulous pope who duplicitously took the name Innocent. Painted in 1650 at the height of the Baroque period, shortly after his arrival in Rome from Spain, it was Velázquez’s eminently successful attempt to rival the portraiture of Titian and the great painters of Italy. The subject of the painting is arguably the most powerful man in the world. He sits confidently on the papal throne, fully at ease “ex cathedra” — literally, from the cathedral seat — as God’s representative on earth. The true brilliance of Velázquez’s accomplishment in this painting is to have satisfied his demanding papal client with a flattering, beautifully rendered portrait while at the same time passing on for the ages the unmistakable hint of corrupt character and deep-seated deceit behind that well-ordered and stern facade.[1]

“Haunted and obsessed by the image . . . by its perfection”,[2] Bacon sought to reinvent and update the seventeenth century image by transforming the Spanish artist’s confident client and relaxed leader into a screaming victim. Trapped as if manacled to an electric chair, the ludicrously drag-attired subject is jolted into motion by external forces or internal psychoses. The eternal quiet of Velázquez’s Innocent is replaced by the involuntary cry of Bacon’s anonymous, unwitting, tortured occupant of the hot seat. One could hardly conceive of a more devastating depiction of postwar, existential angst or a more convincing denial of faith in the era that exemplified Nietzsche’s declaration that God is dead.

In Bacon’s words: “Great art is always a way of concentrating, reinventing what is called fact, what we know of our existence — a reconcentration . . . tearing down of the veils that fact acquired through time. Ideas always acquire appearance veils, the attitudes people acquire of their time and earlier time. Really good artists tear down those veils.”[3]


In much the same spirit that Velázquez went to Rome, determined to vie with the state portraits of Titian and remake them in the image of his time, Bacon’s papal variations are his attempt to reinvent or reinterpret Velázquez’s image in a way that would be valid for the mid-twentieth century. To accomplish this reinvention, Bacon essentially replaced the grand, official papal portrait with an intimate, spontaneous, candid camera glimpse behind the well-ordered exterior. While Velázquez portrayed the pope “ex cathedra”, Bacon might be said to have captured him “in camera” — as if unselfconscious behind a closed door or one-way mirror. While Innocent directly confronts his audience with a confident, almost contemptuous gaze, Bacon’s Pope, preoccupied by pain, seems utterly oblivious to observation.

In achieving his updated portrait, Bacon grafted a graphic film image onto the staid Baroque prototype. The specific source for the transformed pope’s screaming mouth, shattered pince-nez, and blood-dripping eye is a black-and-white still from Sergei Eisenstein’s classic 1925 film, Battleship Potemkin. Bacon first saw the film in 1935, viewed it frequently thereafter, and throughout his career kept the photographic image like a touchstone in his successive studios. The particularly vivid scene in the film depicts the panic of a woman at the instant she is shot in the eye by czarist troops while descending the long flight of steps in Odessa leading from the upper town to the working-class dockland. For Eisenstein — and later Bacon — the woman’s spontaneous reaction becomes the compellingly apt metaphor for a world turned upside down. Nothing could be further from the supremely confident composure of Innocent X.

A further art historical source for Bacon’s depiction is Titian’s Portrait of Filipino Archinto (circa 1551-62). This Italian picture, which anticipates the Velázquez portrait of a century later, is unique for the mysterious transparent curtain hanging across the right half of the painting. The diaphanous veil bisects the cardinal’s right eye and blurs the hand and side of his face. Bacon, in photographic fashion, duplicates this blurred, smeared appearance in his portrait as if the veil had been hung across the entire painting, and explains the effect by claiming, “I wanted to paint a head as if it folded in on itself, like the folds of a curtain.”[4] It also gives Bacon’s painting the contemporary feeling and insubstantial appearance of a film image projected onto the folds of a closed curtain. A personal source for the ubiquitous scream and oppressive evocation of claustrophobia in Bacon’s art of this time may well be the asthmatic condition that exempted him from military service during World War II and continued to affect him throughout his life.


Returning to Study for a Head, 1952 we can now fully appreciate and admire how it anticipates and informs Bacon’s best known painting — Study after Velázquez’s Portrait of Pope Innocent X, 1953. It is an uncanny harbinger and well rehearsed study at roughly half the size but cropped to concentrate on the all important head and shoulders. Somewhat surprisingly and perhaps counter intuitively, the head in Study for a Head is actually slightly larger than the head in Study after Velázquez’s. . ., the pince-nez more strongly defined in black and according to Martin Harrison, “. . . the mouth, which seems to have been the object of his special attention, is painted with great virtuosity.”[5]

The setting is a darkened space with a prototypical Baconic thin white-lined, perspectival cube defining depth while centering the figure. The support behind the pope (similar to those in three other of the six small portrait heads of 1952) with its multiple, vertical supports and downward curved, top rail — all rapidly painted in yellow/gold — appear more like the brass bed head rails of Bacon’s business man portraits (the first being Study for a Portrait, 1953-03) than the ornate, finialed throne of Portrait of Pope Innocent X, 1650. In our painting Bacon has continued the brass rails up from the head rail to the top of the canvas on both sides thereby anchoring the image to the picture plane. This golden line, space articulating device, is further developed and used to great effect in the subsequent series of eight large, papal portraits of the following year (Study for Portrait, 1953-07 through 1953-14). Yet for the later series Bacon reinserts the decorative and iconographic finials to evoke Innocent’s throne from Velázquez.

The face of our portrait has a slight green hue in contrast to the dark red lips and a line on the forehead suggests an ecclesiastical cap or “zucchetto” rather than a Frankensteinish forehead. It is interesting to note that Bacon always paints the papal garments as purple rather than Velázquez’s crimson as he originally worked from black and white reproductions of the Velázquez. He claimed never to have seen the actual painting at the Palazzo Doria Pamphilj in Rome where it resides in a small corner gallery to this day paired with a brilliant marble bust of Innocent X carved by Gian Lorenzo Bernini in 1650, the very same year that Velázquez painted his great portrait.

There is a distinct photographic blurring of paint to suggest motion and a hint of vertical lines on our pope’s face — note especially the chin, sideburns and forehead — which tentatively suggest the curtained effect of the masterpiece that Bacon wrought the following year. Suffice it so say that the bravely experimental Study for a Head is both a quintessential Bacon pope and one of the first small portrait head studies which after 1962 became his chosen format to compliment his larger single canvasses and triptychs. 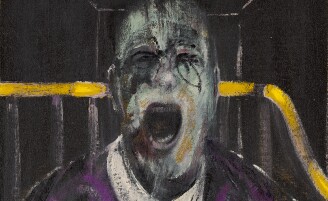