A head of the unveiling of Christo's final, historic work, L’Arc de Triomphe, Wrapped, and the accompanying Sotheby's exhibition, The Final Christo, Simon Shaw speaks to Lorenza Giovanelli, the artist's long-time studio manager about Christo's creative process, daily routine and the scope of his artistry.

Simon Shaw: When we think about Christo’s projects, there are really two halves of a whole: the “happening” itself, which is a very public, physical, temporary event – and then the “original works,” intimate, created in private and lasting forever. Standing among these extraordinary Arc de Triomphe pieces they seem to plot a journey from imagination to reality, charting the course of creativity itself.

Lorenza Giovanelli: Yes, Christo actually thought of his practice in those terms. The journey begins in the studio and ends at the site of the project. His original works tracked that path, essential for the engineers in building the project, and essential to explain to the public what it was about, how it would transform the space. You discover Christo profoundly in them, his passion, his skill – you enter the artist’s mind, because everything is designed precisely as he envisioned it, down to the position of each rope, knot, and fold. His work is very literal like that, very descriptive, and each work would change as the project developed.

SS: They are literal in that sense yet each has its own character and mood, as if he’s trying to understand how things will feel at different instants – during a busy evening rush hour on the Champs-Elysees, for instance, or in the heady quiet of dawn. It’s a kind of conceptual Impressionism. Each work scissors out a moment in the project’s life and captures it for eternity.

LG: That’s the magic of them, it’s like glimpses of a soul, in all its magnitude. And you’re exactly right, Christo even used to say in a playful way, “I want to play Monet, I want to draw the Arc de Triomphe at different times of day.” That’s what inspired the fabric for this project: those remarkable slate roofs that make Paris so special, the way the ardoise will change from morning to night, so the color of the fabric was created with those blue and silver tones. It’s truly Impressionist and it reflects the nature of the projects themselves, constantly changing to reflect their environment.

SS: That reminds me of Caillebotte, the way he captured the moods of Paris through her stones. Christo’s blue, silver and red ropes evoke the tricolore too – it’s a fitting tribute to the city, the birthplace of his art and the only location honored with three public projects. It was clearly chosen with great care. In wrapping such a potent symbol as the Arc de Triomphe, Christo actually reveals its essence, shifting our perception and making the structure even more powerful.

LG: When it’s wrapped, it also becomes more approachable, somehow – suddenly a monument that seemed so distant and so freighted with history becomes newly compelling. People always want to touch his projects, which fascinated Christo. He wanted to create that same feeling with the drawings, so they are very tactile – there’s wax crayon, enamel paint, collage, twine – just layer over layer of color and materials. He would include samples of the real fabric, then use thread to mimic the ropes, and add that industrial paint that has so much texture. He wanted people to engage with all their senses.

SS: It’s like he’s reveling in his media, the materiality. You can sense his touch in each work and see the materials and the tools he used every day in his studio. But within the studio he was obsessively private, and you were a privileged witness to that – what was that like?

LG: The studio was everything to Christo. He would start early in the morning, then spend endless hours working – into the evening, or into the next day, he loved it so much. He was very methodical, each tool had a place and a function. It was a fascinating process, very ritualistic. He would start a drawing flat on the table, then hang it up on the wall to get a better view before he painted it, and then put it on the floor – finally getting physically on top of it, with his knee pads, to add the technical data and titles.

SS: Amazing. One of the things that is so extraordinary is the way Christo juxtaposes the technical universe of engineering with a stunning creative facility, two very different types of mind within the same space. The draftsmanship, his virtuosic flow with his materials, especially pastel and crayons: it’s like Degas, or Seurat, even Leonardo. The way he handles the line of the drapery as a great Renaissance painter would, making it both conceal and reveal the form beneath.

LG: He had a very classical education at the art academy in Sofia, where he trained in the three arts – sculpture, painting, and architecture – like Michelangelo, Bernini or Leon Battista Alberti, that concept of the arts dating back to antiquity. Of course Christo created sculptures, paintings, and his art was deeply related to architecture, so he was a complete artist. His projects were all those things. And he really enjoyed that because he found his own way to describe reality, to articulate his own interpretation of the world.

SS: What we see with the Arc de Triomphe is a dramatization of that process, taking an impossible, magnificent dream and making it real. There’s such flourish and personality there; his studies have a warmth, a beauty, and a joyfulness that are irresistible.

LG: Absolutely. All of Christo is in there. They are joyful because each time he drew a line, he would think about that line becoming real. The more he drew, the more real it became. That’s why these works are so critical, they create something even before it exists and guarantee its purity. This is where the “fabulous expedition” begins. And then – after the project is done – they preserve the memory of that magical journey forever. 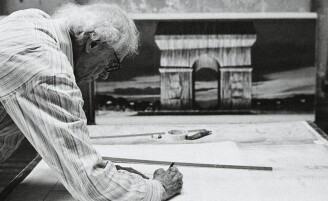