I n 1966, Ernesto Briel burst onto the Cuban art scene with an exhibition of his drawings in a show entitled Op Pop. At that moment, Briel began his lifelong contribution to the international movement of Op Art, exploring the boundaries of visual play and optical illusion in his practice. Ahead of the upcoming exhibition at S|2, we look more closely at this compelling artist.

From its inception in Europe, the language of geometry and illusion within Kinetic and Optical Art had a strong pull for its followers in Latin America. It was not by chance that as early as the mid-1950s, Venezuelans Jesús Raphael Soto and Carlos Cruz-Diez were already in Paris alongside Frenchman Victor Vasarely; they were joined in 1958 by Argentine Julio Le Parc. This group of artists had begun to carve a place for themselves within this European scene. Geometric abstraction had already been deeply pervasive in visual language of modernist Latin American art; so a shift towards imbuing their works with movement, whether physically or by painterly effect, was second nature for these artists.

The development of Ernesto Briel’s work begins back in the early 1960s, prior to the 1966 exhibition that placed him at the vanguard of the Cuban contemporary art scene. It was in his small studio in Guanabacoa, an idyllic coastal town in Havana, that he started to create assemblages and three-dimensional pieces that played around with the feelings and proposals of the kinetic movement; and at times, revisited the essence and proposals of the historic Dada group. By the time of Op Pop, a two-man show shared with fellow Cuban artist, Armando Morales, Briel’s explorations had already produced an impressive number of works. The show mostly included works on paper executed with Indian ink, similar to those reproduced in this book. These drawings range from simple linear drawings to intricate compositions that propose a complex array of undulating, intertwining geometric forms, resulting in dynamic conundrums. The interplay of geometric forms and the movement this creates would obsess Briel throughout his career, but most significantly during this early period.

It would be on the occasion of this key, early exhibition that Cuban art connoisseur, writer and critic Samuel Feijóo would provide his insightful review of the exhibition and go on to label Briel as a ‘purist’, and as someone committed to a sophisticated play of rigorous geometry. This exhibition was acclaimed by both critics and the public at the time and brought about Briel’s inclusion in the permanent collection of the Young Artists Galleries at the Havana Museum of Fine Arts. From around this time, Briel’s career began to gain more national recognition, which led to his work being more widely shown, both in Cuba and abroad in the 1960s and 1970s. For the next decade or so, he would receive several public commissions. He produced a series of drawings for the design of stained-glass windows which were later constructed and placed permanently in one of Havana’s fashionable hotels located in the beach town of Santa María del Mar, and a mural at Avenida del Malecón, the road bordering Havana’s iconic seawall.

1980 was the year of an unprecedented exodus in Cuba. This important event, known as El Mariel, brought over 125,000 Cubans to American shores, looking for freedom. Many of them were artists who were also pursuing freedom of expression. Briel was amongst them. With his lifelong partner, fellow Cuban artist, Cepp Selgas, he settled in the midtown area of New York City and became rapidly acquainted with what the city had to offer. He lived and worked in his beloved adoptive city until his premature death in 1992. For Briel, leaving Cuba meant a re-evaluation of the definition of art, which was now seen for the first time through the lens of liberty. In New York, he finally had access to the work of other artists who had similar concerns, such as Bridget Riley and Frank Stella.

From 1982 to 1983, he produced one of his most celebrated series of drawings, executed with a painstaking attention to detail and elegant lyricism. A series of ink drawings of kites that he began in Havana in the seventies was completed in his studio located on 44th Street and 10th Avenue, in New York’s Hell’s Kitchen neighbourhood. As with all of his works from the 1960s and 1970s, each of these drawings were started and finished with no break, never lifting the drafting pen from the paper in order not to leave on it unwanted bulks of ink. These twelve drawings also mark the end of a period of linear drawings, and the departure for Briel from the Op Art movement.

Towards the late 1980s and the early 1990s, Briel’s work turned to a lighter yet more contrasting palette of washed whites, greys, browns, and bright golden greens. Both the compositions of the works and their titles reflect the painter’s philosophical and existential concerns at that moment. Works from this period were exhibited in his last solo show in SoHo, New York City in 1992. In the same year, a lifelong dream of Briel’s became a reality: he was asked to join fellow Cuban master Carmen Herrera in an exhibition at Jadite Galleries in New York entitled Duo Geo. Briel could not attend the opening of this exhibition due to his declining health, so Herrera represented both at the opening event. Briel would die of AIDS-related complications a few weeks later.

Ernesto Briel’s legacy is rooted in a profound passion and faithfulness to geometric abstraction. The purist draftsman of the 1960s and 1970s, the pioneer of Op art in his native Cuba, came full circle. Towards the end of his life and career, he drew, sketched, and painted with incredible strength and precision. He dared to give a flat pictorial surface a more painterly quality, enriching and adding more three-dimensionality to the planes of the picture. In his practice, Briel fused together elements of the linear, minimal, and geometric with an intricacy and depth of vision that reveals the flexibility and universality of his chosen subject matter. 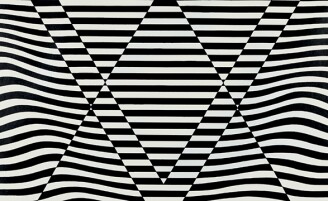