For British artist and designer Robin Lucas, the home is a place for storytelling. “The interior is a portrait of sorts. You can read a person very clearly by what they surround themselves with – it's important then to be near artwork and objects you love,” said the young designer, whose signature interiors are known for their effortless integration of classical objects within contemporary settings. Taking inspiration from the Old Masters, Lucas has sketched his ideal imagined backdrops for five paintings in Sotheby’s Old Masters Online auction (21 January–5 February). Recently we spoke with Lucas about the unique project and why Old Masters are back in style.

You’re both an interior designer and an accomplished sketch artist with two books of illustration – The Sketchbook of a Gentleman – London and Tuscany – recently published. Can you tell me a little bit about how these two interests intersect?

I'm self-trained in both! Design, art and architecture were passions for me even when I was a child. I was always with a sketchbook, but I studied to be a biologist at Oxford actually. Now I find that the balance between working as an artist and a designer helps combine aesthetic and art historical points of view. Essentially – what works well together visually, but also what’s the story behind it, and I find that particularly interesting when it comes to Old Master paintings.

How do you see Old Master paintings existing within a contemporary home?
There are preconceptions about Old Masters that can be intimidating. People see paintings like this in the National Gallery or in The Met and think, “Oh, that can’t be for me, these belong in a museum.” Whereas I would say that these paintings work so well in the home because of that depth of history. It takes a certain amount of confidence to decorate with them.

Do you have any suggestions or philosophies on decorating with paintings such as these?
When you see a glut of Old Master paintings all together it can seem a bit indigestible, which is why it’s important to allow these painting to interact with furniture and objects in a home context. If you can focus attention on one, the individual richness becomes very evident.

Below, Robin Lucas shares the inspirations behind his sketches:

I found Portrait Of Master Edwin incredibly enigmatic. Paintings of children can often be slightly sugary and chocolate-boxy, but this has none of that. The boy has a deep, piercing stare. In imagining this bedroom, I felt the painting’s rich browns and its beautiful gilt frame would work very well with a room of blues, tans and greys. It’s quite a masculine bedroom, but with a softness in the textures of the bedspread and the flowers on the Regency chest of drawers.

This painting is so big and striking. The figures are close to life-size – you could almost look them in the eyes. It’s an arresting image, but perhaps too intense for an intimate space where you’re spending a lot of time sitting, which is why I thought a hallway would work well. There is an incredible richness to the painting that I thought could stand up to a strong wall color, which is why I chose this Etruscan red on the walls. I added the dog, well, because I just like dogs.

There is a theatrical, even operatic quality to this version of Daniel in the Lion's Den. Daniel makes these wonderful hand gestures, while at his side is an incredibly fierce, but also comical lion. The green sash and the drama of the movement has a glamour that I picked up in the velvet sofa with fringing, and in the soft green on the walls, tasseled lights and leopard print. Together these elements create an opulent 1930s interior juxtaposed against this incredibly dynamic painting.

4. Guest bedroom with A Coastal Scene with Mountains in the Distance by Andrea Locatelli. Estimate $10,000–15,000.

Of all the artworks I chose, I felt that this was the most natural to accommodate in a home. This small painting showing the warm views of Italy’s coast is particularly domestic in scale, colors and composition. The soft blues of the sky are very appealing to me, which I echoed in the room with petrol blue on the woodwork and sky blue on the walls. The garments worn by one of the figures inspired the rust-orange color of the drapes. In my mind, this is an ideal guest bedroom with lots of interesting books to peruse in bed. There are little objects of interest which I always love – two little Papua New Guinean ax heads on the bookcase, flowers from the garden and a Chinese porcelain vase.

5. Library with Still Life of a Roll, Glass Vase of Carnations, an Orange, Walnuts and a Bowl of Almonds with Goldfinches by Circle of Georg Flegel. Estimate $20,000–30,000

This painting is absolutely stunning, full of rich details like these exquisite little goldfinches that make it almost like a jewel box. It’s quite a small painting so I placed it between two bookcases on an oak-clad pier for a sense of prominence in a room where it could otherwise be lost. I thought it would do well in a library where someone could stand and study its details, such as the beautiful little wasp, half walnut or fly on the loaf of bread.

Artist and designer Robin Lucas splits his time between the Isle of Wight, London and Lancashire, England, and works on commissions and consultations internationally. His studio can be contacted at info@robinlucasstudio.com. Highlights from Old Masters Online will be on view at Sotheby's New York galleries from 25 January–2 February. 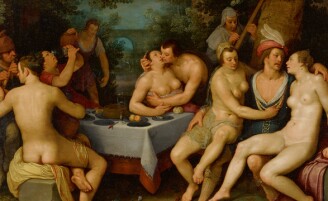