NEW YORK – Since founding luxury online marketplace 1stdibs in 2001, Michael Bruno’s creative projects run the gamut. When he is not launching apps and innovative tools of the trade, Bruno buys and restores historic homes, many built by renowned architects such as John Russell Pope and the firm Delano & Aldrich. This summer, Bruno will open his first hotel under his company Tuxedo Hudson. The 7 Lakes Inn will be a cyclist-focused resort in Sloatsburg, New York, with amenities ranging from an organic market and brewery to a bike shop, art gallery and access to trails situated around 70,000 acres of parkland. With a passion for collecting and an eye for design, Bruno often turns to New York’s WYETH for contemporary decor to complement his antiques. "With WYETH, you can mix very modern pieces in an eclectic environment,” he told Sotheby’s. Ahead of our WYETH: The Art of Timeless Design auction on 6 June, we spoke to Bruno about the fascinating stories behind his one-of-a-kind homes, as well as the sale’s most splurge-worthy pieces. 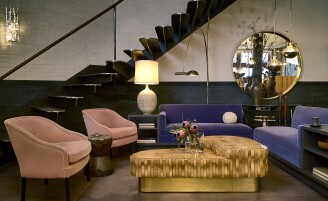 Do you have any early memories of being interested in design?
When I was in school and on the swim team, I would do laps in the pool thinking about floor plans and houses. If you were ever a swimmer, you know that when you do laps, you can get into this state that is almost like a trance.

How did you develop a passion for acquiring and restoring historic properties?
I don’t know where it came from; I just know I always had it. My family always lived in pretty, older homes, and had I not gone down the path I went, I would have liked to be an architect. I’ve bought and sold a lot of homes that often are in the path of a wrecking ball. My preference is to save homes that other people wouldn’t be willing to tackle. 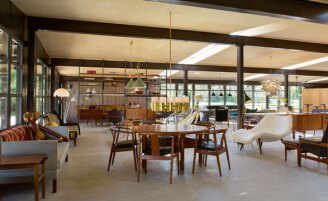 Tell me more about some of your favourite houses.
I have a charming house in Maine that I love more than anything else I own. It’s on sixteen acres on the ocean and was built in the 1920s by Delano & Aldrich, a very important, turn-of-the-century architecture firm. It was built for Ambassador Morrow whose daughter Anne married Charles Lindbergh. He used to land his plane on the lawn.

In Tuxedo we have a house that John Russell Pope built in 1901, and we also own the Loomis Lab in Tuxedo Park, which is a 20,000-square-foot mansion with all Tiffany windows that was converted into nine apartments. It was built by Spencer Trask, who later sold it to Alfred Lee Loomis. Loomis made it a laboratory and brought scientists from Europe there in the 1930s. They invented radar there and made a lot of very important discoveries that led America to win World War II. President Franklin D. Roosevelt’s aunt built and owned my house in Tuxedo, so he would go there to visit her and to meet with the scientists. There’s a New York Times Best Seller written about this time and property, and a documentary about it is coming out this year.

THE LOOMIS LAB IN TUXEDO PARK, A PROPERTY NOW OWNED BY BRUNO. PHOTOGRAPH BY JILL SWIRBUL.

What do you look for in an interior decorator or designer?
I work with designers who are also collectors and typically use a lot of antiques and vintage. Lisa Bowles, whom I’ve known for twenty years, is designing our hotel. She has amazing taste. Without designers, we would end up with far less beautiful projects and probably would have spent more money. You make a lot of mistakes, so quite frankly, a good designer can save you a fortune.

You’ve said in past interviews that people who decide to be collectors aren’t true collectors. Can you explain?
To me, people become collectors through a process of passion. There are people who say, “One day I’m going to be an art collector.” These people are often collecting from a perspective of pure investment, and I think those are investors, not collectors.

Does your collection have any specific themes?
When I started really buying furniture for some of the first houses I owned, I hadn’t realised it, but I collected a lot of animal-related objects, not parts but rather themed pieces. One woman came to my house with her children, and she told them, “See how many animals you can count!” And I thought, “Oh my God, I didn’t realise there were so many.”

THE VILLAGE AT BRUNO'S NEW HOTEL, THE 7 LAKES INN.

How would your describe your style?
I’d say it’s evolving. Funny enough, I’m moving in a more minimalist direction. I go through my house all the time, and I edit layers out. While a minimalist would say I’m anything but one, compared to how I used to be, I am looking to keep things super simple and upgrade to better objects and art.

What attracts you to WYETH?
I have quite a few WYETH pieces in our homes. I have an amazing pair of Italian lamps, a bar that is beyond gorgeous, a minimalist dining room chandelier and a beautiful black sofa. At the WYETH Sotheby’s sale preview, I saw a modern Nils Fagerholt fireplace that hangs on the wall. At the moment, because I need so many things for the hotel, I’m trying not to buy anything I don’t have a place for, but I love that piece. We might just splurge on it because it would be for a public space at the hotel.

Click the slideshow to view Michael Bruno's Favourite Pieces from the upcoming auction: 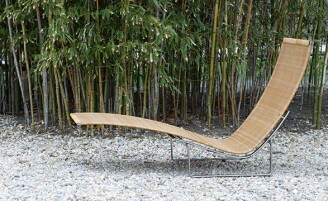