D avid Hockney’s The Splash is undoubtedly one of the most iconic Pop art images of the 20th century.

When considered alongside its sister painting, Tate’s A Bigger Splash, Hockney’s composition of a sun-drenched swimming pool disturbed by a torrent of cascading water is a definitive image, not only within the artist’s career and the Pop art movement at large, but also within the greater canon of art history itself.

Indeed, looking beyond the 20th century, there are very few artworks to have attained such a status: equally as recognisable as Edvard Munch’s The Scream, Vincent van Gogh’s Sunflowers, Claude Monet’s Waterlilies, Warhol’s portraits of Marilyn Monroe, Lichtenstein’s comic strip heroines, and Jasper Johns’s Flags, this motif is a masterstroke of ingenuity that sits squarely in the select pantheon of true art history icons. Semiotically tied to our very understanding of what Pop art is, and inextricable from the idea of Californian living, this image is utterly ingrained within the contemporary cultural imagination. It is an irrefutably famous, museum-worthy, and undeniably rare painting of masterpiece calibre and mythic proportion.

Painted in Los Angeles towards the end of 1966, The Splash is the second in a three-part sequence of variations on the very same theme. It is sandwiched between the much smaller The Little Splash (Private Collection) and Tate’s A Bigger Splash, which was created early the following year in Berkeley during a teaching post. When comparing the two, the present work’s scale of 72 by 72 inches is immersive and rivals the colossal dimensions of its sister version; the compositions are almost identical, with large bands of unprimed canvas framing the clean lines and still colour fields of the central image; whilst the splash itself is rendered with equal deftness and dexterity in both canvases – the immediacy of a split-second moment is here immortalised by brushstrokes of careful application and minute articulation.

The Splash and its pendent piece undoubtedly represent the apex of Hockney’s Californian fantasy which started life following the artist’s first trip to LA in 1964. Cleansing the air of the 1950s, which had seen Abstract Expressionism gradually suffocate under its own earnestness, Hockney’s ‘Splashes’ revealed the artist’s pre-eminence as a leading light of his generation. With these works, Hockney demonstrated his singular ability to absorb and resolve the disparate concerns of Abstract Expressionism, Minimalism, and Pop art in a style that was entirely his own. 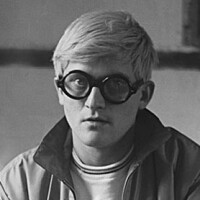 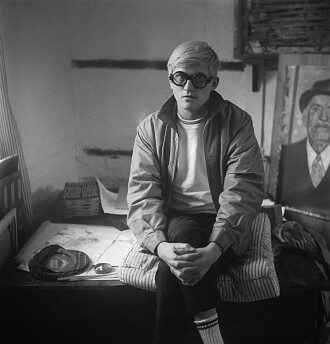 After spending some time in New York, Hockney travelled to the West Coast of America for the first time during the summer of 1964. Upon arriving, he was instantly struck by the quality of light, the landscape of California, and by the ubiquity of swimming pools. “As I flew over San Bernardino and looked down and saw the swimming pools and the houses and the sun,” Hockney recalled, “I was more thrilled than I’ve ever been… I thought it was really terrific, I really enjoyed it and physically the place did have an effect on me” (David Hockney cited in: Exh. Cat., London, Whitechapel Art Gallery, David Hockney: Paintings, Prints and Drawings 1960-70). Hockney fell under the spell of California almost immediately; the vivid and undoubtedly erotic frisson of a city in which every house seemed to have its own Bacchanalian retreat in the backyard was the hedonistic escape the young artist had so longed for back in dreary Blighty. Upon his return to London later that year, the first thing Hockney painted was Picture of a Hollywood Swimming Pool and thus began the artist’s most important body of work and enduring subject: Southern California.

In 1966 Hockney decided to relocate more permanently to California and took up an apartment/studio near the junction of Pico and Crenshaw Boulevards in Los Angeles. It was here, between the summers of 1966 and 1967, that Hockney would paint some of his most iconic works, including the present composition. During these twelve months the young artist veered away from the naive line and abstract forms redolent in his previous work and instead took up a truer approach grounded in the visual effects of light and shadow on figure and form.

With works such as Peter Getting Out of Nick’s Pool (Walker Art Gallery, Liverpool), Portrait of Nick Wilder (Private Collection), and Cologne) – all painted in 1966 – Hockney had arrived at a mature and accomplished style that demonstrated greater realism, visual fidelity and conceptual ingenuity, heightened by an idealised and synthetic use of colour and line. Indeed, Hockney’s Edenic vision of California has been likened to that of Gauguin’s Tahiti; as outsiders both artists exoticized and idealised their own personal paradises. Created mid-way through this prolific burst of energy at the close of 1966, Hockney’s The Splash delivered a culmination of the themes explored in his Californian opus to date. Against a Modernist building surrounded by striking high-key colour, the absent presence of a diver, who, at an instant forever captured in paint, is submerged and masked by an explosion of displaced water, delivers a triumph of invention that throws immediacy and permanence into impossible stasis.

Since the beginning, Hockney’s creative urge has been driven by a desire to explore the intricacies and ambiguities of perception, and in this regard the swimming pools of Los Angeles presented him with a fresh challenge – that of depicting a substance in motion that is essentially transparent to the eye. It also involved another of his most-loved paradoxes: that of freezing in a still image something which is never still. He had attempted this previously in a series of ‘Shower’ paintings as well as in several portraits of his friends in pools such as Portrait of Nick Wilder, however, with his ‘Splashes’ Hockney responded to the challenge with even greater innovation and commitment, banishing human presence altogether and replacing it with a dramatic post-dive aftershock.

Against a minimalistic, almost colour-field, composition, Hockney’s undisputed and undisturbed protagonist takes centre stage: a splash of water in the form of an eruption of brushstrokes. The effect, though painstakingly rendered, is utterly spontaneous; heavy white tendrils snake against jets of foam, while specks and droplets cascade from transparent veil-like screens of plumed water. “The splash itself,” Hockney explained, “is painted with small brushes and little lines; it took me about two weeks to paint the splash. I loved the idea, first of all, of painting like Leonardo, all his studies of water, swirling things. And I loved the idea of painting this thing that lasts for two seconds; it takes me two weeks to paint this event that lasts for two seconds. Everyone knows a splash can’t be frozen in time, so when you see it like that in a painting it’s even more striking than in a photograph” (David Hockney cited in: ibid.).

This great explosion marks the split-second vanishing act of a diver about to emerge from the pool’s cerulean depths. It is this dramatic play between tranquillity and intensity, between surface and depth, between spontaneity and calm that gives this painting its visual punch.

Moreover, in pitting compositional rigidity against an illusion of paroxysm, Hockney serves up a wry nod to Minimalism and Abstract Expressionism, most notably to the Action painting of Jackson Pollock who made splashing paint onto canvas hallowed ground during the 1950s. As outlined by Tate curator Chris Stephens, “If the abstract painter’s gesture, captured in a single ejaculation, was an embodiment of emotional and psychological immediacy and authenticity, then Hockney’s laborious rendering of a splash using a small brush over several days is surely a parodic subversion of that belief” (Chris Stephens, ‘Sunbather’ in: Exh. Cat., Tate Britain, London (and travelling), David Hockney).

Indeed, the same parodic reading can be applied to Hockney’s treatment of Modernist buildings, whose precise regularity provides a comment on the sterile forms and compositions of contemporary Minimalist art. Jumping to and from conventional pedestals whilst bridging diverse disciplines at the forefront of the avant-garde, Hockney’s The Splash playfully scrutinises the formal issues of contemporary painting with unprecedented confidence and force. The geometric order of the composition is almost too still, too refined and too composed, and this enhances the drama of The Splash as it erupts out of the canvas to momentarily break the graphic tension of its planar configuration. There is a suggestion too that the coherence of the rest of the surface is on the brink of collapse – trembling with a similar internal force.

In California Hockney discovered his very own Arcadia – for him it embodied an ideal of freedom, a sexual promised land that had fuelled his imagination long before he even arrived there. In the artist’s own words: “I was drawn towards California, which I didn’t know… because I sensed the place would excite me. No doubt it had something to do with sex” (David Hockney cited in: ibid.). The splash paintings, therefore, can be congruously read as a consummating explosion of joy, a voluptuous unleashing of pigment charged with sexual energy.

Through a combination of both formal and metaphorical devices, an illusion of space and Californian life is here abstracted into an essence that is entirely unique, innovative, and utterly multifaceted. Although rooted firmly in popular culture, like much of Hockney’s work, there is a powerful autobiographical narrative that emanates from its close affinity to the events of his life. Indeed, Hockney’s discovery of California in 1964 signalled a watershed moment, an epiphany that finds visual expression in the handful of extraordinary paintings created between 1966 and ’67, the culmination of which is undoubtedly The Splash and its pendent picture, a work visited by thousands every day at Tate Britain.