Daniel Cordier: A Collection in His Own Image

“All artists are singular men, truly all of them. Creation is at the origin of questions that we have never thought of and from which they {artists} show an effect, a result, it is not the beginning of something, it is the end and it is always very important. (...) That is what's interesting about art, it is this extraordinary freedom, we discover that it's a place of freedom and as freedom will be the final word of my life!... "

D aniel Cordier's collection reflects the extraordinary freedom of his artistic choices. He was not concerned with trends; he was a discoverer. Even if the artists loved and defended by Daniel Cordier are numerous and different, a unity emerges from the totality of his collection and forms an ensemble where each element has its place. Each work, each object seems to be alive as if carrying the mark, the energy of the person who once owned it. When Daniel Cordier spoke to me about the artists he had loved, in particular Dewasne, Dado, Gadenovsky, Dubuffet, Nevelson, etc., he did so with a brightness in his eyes that testified to the fact that art, passion and great men never die.

"When people are passionate about something they look for it in everything they are shown and in everything they see. I was interested in showing things that I liked (...) my only specialty is pleasure. When it comes down to it, when I first discovered the Prado, I had no idea what I was going to see, I didn't know what a museum was, I went there because Jean Moulin had said to me "After the liberation you will go to the Prado to see what painting is". It was really by chance (...) and that's what I like about life, it's a series of events that orient your life, it's a series, basically, of wonderful happenstances. I am a man of freedom, for me it is the only thing! I fought for freedom and for that I am ready to set off again!"

After the Liberation, in a Paris that was still the capital of the avant-garde, artistic activity resumed timidly, but the Salon des Réalités Nouvelles, inaugurated in 1946, included the best of abstract art right from the outset and it was there that Daniel Cordier received his first shock, the work of a young abstract artist: Jean Dewasne.

"I have kept some of the gouaches he did that I like very much (...) When I visited this Salon des Réalités Nouvelles, there wasn't much going on in Paris, it was just after the war, I didn't know anything about anything, but this was love at first sight, it was crazy! (...). I liked {his work} a lot, so I took down his address and I went to see him (...) it was the day after the opening of the Salon, I bought four or five paintings from him because I am completely mad! It is a disease that I immediately discovered with Dewasne. (...) Bang! I bought five or six in one go! (...) I didn't know it at the time but I was discovering myself through the love of painting. (...) I had never seen abstract art; there was the Prado and then this. It was probably the fact of abstraction, this play of colors next to each other; it is very difficult to explain. (...) I find it very beautiful. That is what life is! In reality, there are stones, pebbles, there is the sky, there is water and then all of a sudden!...He was a man who I admired because he had created a style that was all his own.”

Daniel Cordier kept the gouaches by Dewasne his entire life but gave emblematic paintings by this artist to the Centre Pompidou. Museums were a fundamental element in his life. While discussing the fact that there were no paintings on his walls he told me that he no longer needed to live surrounded by them.

"All the trips I take are for museums, all over the world. I am not saying that I know everything but I do know a lot of things, in India, in China and I have gone there several times so they are not indistinct memories, I know where things are. I have visited the whole of India, it takes a month and a half to make a fairly complete tour of things, I went there twelve times! Twelve times and I have gone six times to China. I made long journeys to China because in spite of everything, there are things that one does not see {at first} but now it has become very familiar to me, all of it is in my head, I wouldn’t say the whole world (laughs) but really! (laughs) there are things that I have not seen but the main things: the museums of Europe, America, and even Easter Island where I even went twice! "

Art, objects, cultures – Daniel Cordier had the capacity to be amazed, a rare quality. During this conversation we wondered about the meaning of the verb "to admire" that he had used on many occasions. In the different definitions of the verb one can find "to be astonished by", which is perhaps the particularity of Daniel Cordier; his taste for freedom allowed him keep a freshness in his way of looking at things, an openness towards people, to the world and to things. Little by little, he replaced the paintings and sculptures in his home with objects from elsewhere, everyday items or objects from distant cultures, chosen not for their ethnographic qualities but for their plastic ones.

Magically interacting with each other, the mixture of objects, paintings and sculptures once belonging to Daniel Cordier form a marvelous amalgam that reveals the incredible destiny of this man whose collections are like life, free.

* The remarks quoted in this text are from a two-hour recorded audio interview of Daniel Cordier by Dr Céline Berchiche that took place on 29 October 2015 in his apartment in Cannes. 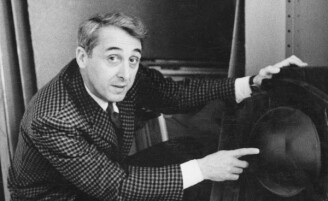