O n the face of it, the two works don’t appear to have that much in common. One — La Tauromachie by French sculptor, Germaine Richier — depicts a victorious matador with a bull’s head at his feet. The other — Thin in the Old by New York painter, Jean-Michel Basquiat — is dominated by a skeletal figure with the distinct hint of voodoo about it.

The works (which feature in Sotheby’s contemporary art sale in Paris on December 6) don’t date to the same era either: Basquiat was only born in 1960, the year after Richier had died. His rise is often associated with the capitalistic confidence of Reagan-era America, while her best-known pieces date to the immediate aftermath of the Second World War.

Having said all that, on close investigation, a number of similarities do appear. For a start, both works find their creators looking back to their roots. In Richier’s case, this meant the bullfights regularly held in the city of Arles, in the south of France, on the outskirts of which she was born and raised.

As for Basquiat, he was a product of the African diaspora (born in Brooklyn to a Haitian father and Puerto Rican mother). Acutely aware of his heritage, he pointed out that “I am an artist who has been influenced by the New York environment. But I also have a cultural memory... [and] it is over there, in Africa”.

African elements crop up in countless of his works – in the case of Thin in the Old, there's the Songye mask that the central figure wears, as well as the silhouette of another figure behind, which seems to have been inspired by an ancient cave painting in Rusape (in today’s Zimbabwe). Interestingly, Thin in the Old was painted just a few weeks after Basquiat had returned from his one and only trip to Africa, in 1986 (to the Ivory Coast, where he exhibited thirty paintings in a show in Abidjan).

It's no coincidence that one of Basquiat’s artistic heroes was Picasso, the latter having flooded his work, for a period at the end of the first decade of the 20th Century, with the iconography of African cultures — most famously, 1907’s Les Demoiselles d'Avignon. The Spaniard, a keen bullfighting aficionado since his youth, is the most obvious influence on La Tauromachie too.

He depicted bullfights on numerous occasions in the 1930s, often with Surrealist touches that Richier ostensibly tried to match in this bronze. Witness the matador’s head, consisting of a tiny crescent; his legs that look like stilts; and the chunky torso with layers of skin peeled away to reveal his insides (more on which in the next paragraph). The figure is perhaps equally well described as biomorphic as it is human. Even the two feet don't appear to be working in unison: the front one is positioned in such a way as to suggest somebody on the move, the back foot planted in such a way to suggest he's static.

The most visible similarity between La Tauromachie and Thin in the Old comes in their main figures' exposed, upper bodies. In the Richier, a gnarled set of innards is revealed for all to see. In the Basquiat, there is also no skin to speak of: we get an X-ray look, revealing guts and rib-cage.

The two artists seem to have reached these same ends for different reasons. Richier — like her peer Alberto Giacometti (with whom she studied under Émile Antoine Bourdelle in Paris) — is renowned as one of the pioneering sculptors who modernised the human figure in the years after the Second World War, rendering it, in turns, gaunt, angular, insect-like or bestial, with a rough and ravaged surface. Her pieces reflected the disfiguring effect that conflict had had upon people, both physically and psychologically. "In violent works, there is just as much sensibility as in poetic ones," Richier said.

For his part, Basquiat had a fascination with the workings of the human body that tends to be attributed to a serious accident suffered as an eight year old, when he was hit by a car while playing on the street. His mother brought to him in hospital a copy of the medical textbook, Gray's Anatomy, which he read assiduously and which would go on to prove a inspiration for the skeletal imagery repeatedly found in his paintings.

In La Tauromachie and Thin in the Old, then, both Richier and Basquiat ventured beyond the superficial, to explore what lies beneath. In response to wounds and scarring of varied kinds, they were investigating what it meant — deep down — to be human. 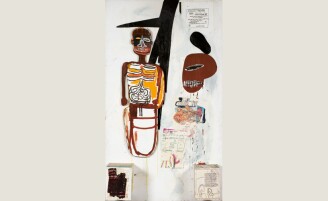