Building a Collection – Michael Attenborough on his Parents' Passion for Picasso

LONDON – Arts correspondent for the Guardian Mark Brown talked to Michael Attenborough, ahead of A Life in Art: Lord & Lady Attenborough sale on 22 November. The original interview appeared in the Guardian here.

Mark Brown: Tell me about how your parents began collecting these objects.

Michael Attenborough: My parents were really sort of habitual about their holidays; they loved what they knew. And they used to go to the same little pension, a hotel in a place called La Garoupe which is right on the tip of Cap d’Antibes. It’s appallingly built up now – back then there was one, solitary hotel on this whole beach front. And they used to go out to the same hotel, same bedroom. I can remember going down in the car with them from London to Vallauris. It was three days I seem to remember. Dad mapped out the journey, down through France, according to which Michelin starred restaurants would provide the loveliest meal at the end of the day.

The tradition was that we went to Vallauris, the pottery town. Then you come upon this one storey building in the middle, with a kind of gravel car park, and very modest it was, called the Madoura Gallery. There were two: one in Vallauris and one in Cannes. Dad liked going to the one in Vallauris because he could park easily and could take his time – it was less populated. Going through these narrow streets in Vallauris, with this hideously hot and oversized Bentley, was kind of absurd. But there we were, British to the last. He would often go around his birthday and would pick up new FR: éditions. For some reason this was the only place you could see the latest Picasso ceramics. And even I remember dad explaining to me that this was an area of Picasso's work that wasn't taken terribly seriously; people were more concerned with his drawings and paintings. He often picked up three or four per year.

MB: What did you think of them initially? What was your reaction to the pieces?

MA: As a child, I thought the whole thing was kind of ludicrous. We'd get in the car and drive to this town and think ''why is he staring at all these bizarrely shaped pots and quite often laughing''. He loved the wit of them, and I think a lot of those ceramics in the early days was Picasso just having a great deal of fun. They were erotic and extraordinary, but they could also be cheeky. He got to know the Ramiés over a period of time, they would take him to the galleries to show him the new editions and wait for his reaction.

MA: One year, we were visiting the gallery and Mr Ramié got incredibly excited. My dad spoke no French at all, though my mother spoke it quite well. My dad turned to my mum and said ''what is he getting so excited about'' and she said: ''Picasso is here''. And he replied: ''oh my God I don’t believe it, this is my birthday, and what an amazing birthday present!''. He asked if he could possibly have his autograph, you see my dad has a wonderful collection of his own autographs and Picasso says ''yes, yes, of course'' and so they got hold of a wonderful template photograph of him, but he very cheekily said to my dad ''you have to understand, I don’t do autographs for men''. And so my mother is duly summoned in and, according to dad, he made eyes at her outrageously, as he is scribbling this autograph on this photograph. And I said ''don’t you mind?'' and he just said: ''are you kidding, for an autograph of Pablo Picasso? Of course I don't mind''. I remember thinking as a kid ''This is strange!''.

MB: Did he position them himself?

MA: Oh yes. There was this huge long table in the hall, which in fact, my mother told me in the last few years, was the large table that her in-laws would sit round and have family meals. And I would say the top surface of it would have about four or five Picasso pots, and underneath it there would be another four or five, because there were more pots than anybody had any space to put! One of my favourites, which is actually in the Sotheby’s sale, is of a bull fight, and there are eight terracotta plates that tell the story of the bull fight, and they had to go on the walls.

MA: For my wife and I it was absolutely frightening because you had to watch toddlers. You just lived in fear of one of them smashing a Picasso! Absolutely bizarrely it never happened; I have no idea how it was avoided because they were scattered liberally everywhere, he just loved them. They are so beautiful, and such fun that they will illuminate the lives of those who decide to buy them.

Join us at New Bond Street on Sunday 20 November at 2pm for a gallery talk with Marilyn McCully, renowned Picasso ceramics expert and author of Picasso Ceramics: The Attenborough Collection. To reserve your place email rachel.davis@sothebys.com 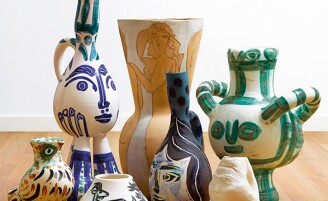