Brooke Shields on Photography, Take Home a Nude and the Artist She’d Love to Paint Her

A muse for virtually every revered fashion photographer, from Avedon to Afanador, Brooke Shields continues to be a timeless source of inspiration for new artists and mediums. An ardent supporter of the New York Academy of Art, Shields is being honored at the school’s annual Take Home a Nude benefit auction, which this year will celebrate “The Muse,” on 9 October at Sotheby’s New York. “I’ve always wanted to get involved with art, possibly because I have zero talent in drawing,” a very humble Shields told Sotheby’s. The actress, model and businesswoman has been a part of Take Home a Nude for nearly a decade. “I’m in awe of people who create figurative art. If you have that strength, you can depart from the human subject, and your work is still informed by it.” Having recently sat for Eric Fischl and in the midst of curating a show with NYAA president David Kratz for Art Basel Miami Beach, Shields spoke to Sotheby’s about her artistic endeavors, past and present. 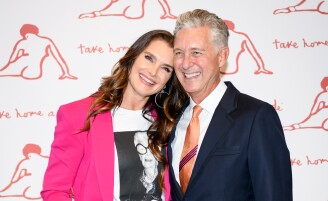 How did you get involved with the New York Academy of Art and Take Home a Nude?
I have this really good friend who helped my husband get our ten-year anniversary present. She knows my taste, and she suggested that he commission Will Cotton to do portraits of our girls. After my husband gave me this amazing gift, Will asked me if I would sit for Take Home a Nude. In the process of modeling, I met David Kratz, and we quickly struck up a beautiful friendship. He invited me to Take Home a Nude, and I fell in love with the New York Academy of Art and its mission. David later asked me to be on the board and creative committee.

What is your collecting philosophy?
I don’t collect art for the value – it just has to be what I like. I love living with art and switching it out. I grew up aware of art, and I’m lucky enough to have been given some wonderful pieces from Andy Warhol and Keith Haring.

You’re a recurring figure in Eric Fischl’s art. How did this relationship begin?
About three years ago, Eric donated an experience to the Parrish Art Museum where he would come to your house, take a picture, give you a study and possibly put you in it. My husband knew that I loved Eric’s work, and he bought it for me as a Christmas present. I called Eric and told him I was the recipient, and he invited me to his studio. After we met, I suggested that instead of just doing one picture of me, I could play a bunch of different characters. He eventually came up with the idea of me playing twins who couldn’t be more polarized. There was the perfectly dressed twin and the trashy twin. It was so much fun and inspired him to do a whole series.

If you could be painted or photographed by any artist – living or dead, who would it be?
Elizabeth Peyton. I feel that she paints people's souls. I’d also say Edward Hopper. John Singer Sargent did a beautiful portrait of my grandmother [Marina Torlonia di Civitella-Cesi], and I always thought that would be an amazing person to have had a portrait done by.

Time for a photography quick fire: Which photographer made you feel most like yourself?
I would say Bruce Weber. There’s something about his pictures of me that always struck a chord.

Who has been the most fun to shoot with?
Ruven Afanador is so much fun. He loves women and glamour, and his pictures of me are some of the best. He has a gentle, beautiful soul, and he is probably the sweetest to work with. And he’s fast!

Who challenged you the most?
Richard Avedon. It was always such a controlled, intense environment. It was not very personal but was very stressful. Also Steven Meisel because there’s always action and jumping, so you had to bring a lot of energy to a very small space. With Bruce Weber, you know it’s going to be a long day because he never finishes shooting. He’ll shoot 100 rolls, and it has to be like all light is lost, so that it’s virtually impossible for him to take another photo.

"I didn’t do anything to get those eyebrows or that face so it feels unmerited, but the hard work I did to graduate was what made me able to write books, design a clothing line and curate art exhibitions."

Who do you feel most challenged you in terms of pushing your artistry to new levels?
Sheila Metzner and I did a photo shoot for Vogue on this incredible jewelry, and the positions she would have me hold were very challenging physically. That was tiring and painful, but it was also exciting because with her characters, I had to be as architectural as the jewelry.

What was your scariest shoot?
Probably Robert Mapplethorpe. He wasn’t well, and I hadn’t met him before the shoot. It was scary for me because I couldn’t gauge if he was pleased or not.

Is there a series you’re most proud of?
It’s not as much pride as it is honor to have worked with these giants of their professions. If I had to be proud of something, it would be that I can adapt to how differently all the photographers approach their shoots. I can morph into whatever it is they need.

What is different about the way you approach being photographed now versus in your past?
When I was younger it was more about approval, whereas now it’s more interesting for me to see how different people's interpretations of me are. If you’ve been around for a while, there is something in people’s psyche that has put you in a certain light, almost like a caricature of yourself. Now it’s much more about character than it is perfection or looks.

In addition to your malleability, are there other traits you attribute your long and diversified career to?
My degree has informed everything in my life. All of that beauty stuff feels much more like a projection onto me because it seems arbitrary. I didn’t do anything to get those eyebrows or that face, so it feels unmerited, but the hard work I did to graduate was what made me able to write books, design a clothing line and curate art exhibitions. It has informed the way I analyze a character and my approach to comedy or being on Broadway. My education has given me longevity more than any physical attribute.