Britain's Pop Pioneers From Hamilton to Blake & Beyond

T he upcoming auction Yellow Ball: The Frank and Lorna Dunphy Collection will feature a number of works by the leading figures in Pop Art, a term invented by the British Artist Richard Hamilton. Here, we look at the origins of the movement and the icons, motifs and objects that propelled Pop around the globe.

Whilst the term 'Pop Art' is closely associated with Andy Warhol, Roy Lichtenstein and Keith Haring, the phrase was first used in Britain in 1957 by the artist Richard Hamilton. He was referring to a shift in the role of the artist in reflecting society, and wrote a letter to a friend explaining his fascination with this new, radical form of expression that began to take hold in creative circles throughout the fifties and sixties:

Once the term has been coined, however, it gathered great momentum around the world, and participants in the movement began to re-examine their methods of production and dissemination, and even the source material they used for making art. Pop art addressed the shifting social and political landscape in the post-war years, whilst the boom in mass-produced products and the advertising industry promoted and celebrated a newly prosperous and optimistic world.

Among the most famous images of the movement are Andy Warhol’s Marilyn and Roy Lichtenstein’s Pop! — but there were many other motifs that perfectly captured the zeitgeist. Richard Hamilton’s Just what is it that makes today's homes so different, so appealing? is widely regarded as one of the first artworks of the Pop movement.

Created in 1956, it marked a new direction for the artist that would incorporate several themes and techniques in to his work. The domestic setting was presented through a series of collaged elements; using pictures of pin-ups, body builders and the latest covetable appliances (the television is cut from an advert), highlighting the methods used in advertising to permeate the average family home.

Pauline Boty’s The Only Blonde in the World (1963), offers a glimpse of Marilyn Monroe (who made several appearances as the muse of the Pop artists) running through an ambiguous scene. It could be behind the scenes on a film set, or a paparazzi shot of her dashing through the streets of New York. The endless reproduction of her image in print and on screen not only struck a chord with Boty; Hamilton and Warhol both produced multiple images of the iconic Monroe in her heyday.

Peter Blake’s most famous export was the cover of the Beatles' album Sgt. Pepper's Lonely Hearts Club Band that used collage to place the faces of the band alongside famous figures such as Marlene Dietrich, Albert Einstein and Marlon Brando. Mass-media, and the ever-growing cult of celebrity was an area of intense fascination for artists.

Images from cartoons, sport and advertising began to move in to the realm of ‘high art' and many in the establishment were shocked. Advertising billboards, brand logos and sales slogans became legitimate source material as artists began to address the impact of commerce and consumerism on society. Typography played an important role in the story of British Pop, as Peter Blakes's ongoing Alphabet series attests.

The legacy of Pop is still keenly felt amongst contemporary artists working today, and works leading on from these early inquiries will also appear in the Yellow Ball sales. Tracey Emin takes her lead from language of Pop with her Marlboro sculpture, proving that found objects still play a part in exploring conceptual dialogues. Though it must also be acknowledged that the Pop players themselves drew influence from Marcel Duchamp’s Objet trouvé investigations of the early 20th century. 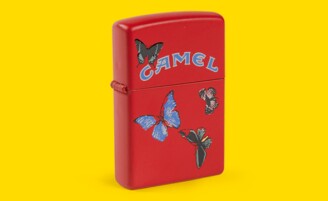