I n 1911, Austria, Denmark, Germany and Switzerland celebrated the first International Women’s Day, demanding to acknowledge the importance of women’s rights. By this time, women’s activism in the West was in full swing. But China was just beginning to undergo vast changes to its own society, where women still suffered oppression by the feudal system. New ideas started to sprout, and the outstanding women of this new China wrote their own stories and had their voices heard. This spring, to honour their courageous journeys, Sotheby’s Hong Kong will introduce the works of two remarkable female artists from Republican China: Pan Yuliang and Lalan.

Pan Yuliang (1895–1977) lived a legendary life. Falling on hard times at a young age, Pan never gave up on herself. With help from her benefactor and husband, Pan Zanhua, Pan Yuliang took to the arts to become not only one of the first female students of Shanghai Art Academy, but between 1921–27 she travelled to study at Institut Franco-Chinois de Lyon, École Nationale des Beaux-Arts de Lyon, École Nationale des Beaux-Arts de Paris and Accademia di Belle Arti, Rome. Setting an important precedent for Chinese artists, her works were selected to be shown at the Roman International Art Exhibition, receiving acclaim from the likes of contemporaries Xu Beihong and Chen Duxiu.

Pan returned to China in 1928 and was hired to work at the Shanghai Art Academy, becoming their first-ever Chinese female tutor, while also travelling to Tokyo to hold a solo exhibition at Shiseido, Ginza. Her level of association with the Western art world at the time was unmatched by any Asian female artist; and even within the relatively less conservative domain of the West, female artists were still few and far between. Pan’s courage, talent and experiences can be considered no less inspirational than those her modern art female contemporaries from the West, such as Berth Morisot, Marie Cassatt, Suzanna Valadon and Marie Laurecin.

Academically, Pan received critical acclaim from both the East and West. As early as the 1950s, Pan held a solo exhibition at the Royal Academy of Fine Arts, London, and her works were shown frequently at Musée Cernuschi, Paris. They were considered so significant that the French Customs Office prohibited the shipment of her works to overseas destinations. Pan and Léonard Tsuguharu Foujita became the only two Asian artists featured in Jean-Claude Bernard’s documentary Chez ceux du Montparnasse, and, thereafter, Pan received numerous accolades and recognition from Académie Française and University of Paris.

Pan’s oeuvre was rather prolific, yet, after her death, most of her works were transported back to China and acquired into the collections of the National Art Museum of China, Beijing, and the Anhui Museum. As such, there exists only very few works in the market available for public viewing. Only in June 2015, when Fan Di An published the catalogue rasionné Twentieth Century Chinese Art: The Complete Works of Pan Yuliang, did the public have access to the full documentation of the artist’s works. Last year, in 2018, the Shenzhen Museum hosted a solo exhibition of Pan’s works, which was immediately followed by the major presentation Song of Spring – Pan Yuliang in Paris at the Asia Society Hong Kong Center. Both exhibitions were successful in attracting collector interest and renewed curiosity in the artist’s life and works.

The resurgence of interest in Pan’s oeuvre has been reflected in recent prices achieved for her works. Sotheby’s spring Modern Art Evening Sale saw Baigneuse sell for HK$27,684,080, achieving four times its high estimate. This season’s Evening Sale presents Bouquet de churysanthemes roses, 1944, a painting which first belonged to the collection of Pan’s old friend, Mrs Aznif Hodaghian. The pair met in France after the Second World War, where Mrs Hodaghian acquired the piece from Pan and kept it well conserved for decades, even maintaining the work in its original hand-carved wooden frame.

Pan was partial to chrysanthemums for its perceived elegance and uniqueness. An embodiment of her circumstances, she shared her fondness for the flower with her husband, and when they were together in Shanghai, the couple’s garden was full of chrysanthemums. As such, in the days of Pan's wanderings overseas, the subject of the chrysanthemum became imbued with emotions of longing for her family and homesickness; so much so that she inscribed into her notes Wen Yiduo’s poem In memory of Chrysanthemums, which may be said to be the inspiration for this painting. In the Anhui Museum's is a series of ink and colour works on paper that may represent earlier renderings of the painting, though the final canvas seems to better depict the vividness of the subject matter, breathing life into the piece. In 1944, not only was China faced with military conflict of the Second Sino-Japanese War, but in France, Parisians were confronted with German Nazi occupation. At one point Pan was driven out of her studio by the German troops, an experience that further inspired the artist’s resilience and fearlessness.

Pan’s style of oil painting reflects the training she received in Paris and Rome, and her skilled use of Western media is evident in her portrayal of form and colour. While living in Paris in the 1930s, the artist settled in Montparnasse, thus developing a style influenced by the Impressionist and Parisian schools of painting. Her use of colour and expressive brushstrokes pulls inspiration from the works of Pierre-Auguste Renoir and Marie Laurencin, and creates paintings that are exuberant, thoughtful and reflective. Pan’s chrysanthemums in vases are favoured by collectors. They flourish gracefully and are imbued with the meaning of beauty and goodness. Her ink and colour on paper titled Chrysanthemums in a Green Vase sold for HK$17,440,000 in Sotheby's Hong Kong 40th Anniversary Evening Sale in 2013, establishing a new record for the artist.

A Talent for Music and Dancing

Lalan (1921–1995 ) was born into a family of scholars and intellectuals. With unbridled talent, she was a master of music, dance and painting. A daring and independent forward-thinker, Lalan never shrank from pursuing her dreams and passions. She began a personal artistic revolution that continues to ripple through aspects of Chinese art history that still reflect her passion. Her multifaceted identity and broad-ranging interests enriched her artistic output and nurtured what she called l’art synthèse – a synthesis of music, dance and painting.

Drawing inspiration from traditional Chinese landscape paintings, Lalan created “inner landscapes” during the 1970s. In these pictures, the sun and the moon, mountains and rivers, and other topographical elements can vaguely be seen, but they do not coalesce into specific identifiable scenes. These inner landscapes are rather transcendental paradises. Lalan was vocal in her admiration of the landscape paintings of the southern Song dynasty, especially those by Xia Gui and Ma Yuan. The latter distilled the monumentality of Northern Song landscapes into tranquil and minimalist vignettes, implying and evoking vast spaces through partial or obscured mountains and waters. This sophisticated visual aesthetics informs La lune est voilée, in which a textured cliffside is seen on the left edge. This lopsided and diagonal composition pointedly recalls the works of Ma and Xia.

Lalan’s painting is dominated by abstract atmosphere, at the center of which a round moon-like body can barely be seen. Lalan captures the beauty of mist and clouds through the bold use of negative space. She renders the spatial transitions between foreground and background by applying delicate and subtle shades of blue. In Lalan’s interpretation of traditional Chinese landscapes in the oil medium, we feel a distinctly Asian aesthetic that recalls Zhuangzi’s notion of “losing one’s connection to language once the meaning is grasped.” As the artist herself hoped, her work allows the viewer to linger in an ideal realm, free from everyday worries and transported into the sublime.

Representative of Lalan’s practice of the 1970’s, the present work was exhibited in her large-scale touring retrospective exhibition and has been featured on the covers of two of her catalogues. Its art-historical significance cannot be overstated.

La lune est voilée dates from a critical moment in Lalan’s career, when she began to present her L’art synthèse to the international art world. In 1971, she mounted several solo exhibitions at Galerie Jacques Desbrières, Galerie Iris Clert and other venues, where she played electronic music compositions and danced in front of her abstract landscapes. Lalan’s paintings were often guided by her inner music and dancer’s sense of rhythm. La lune est voilée is the perfect illustration of her synthesis of the three arts. The outlines of the cliff vibrate like musical notes, giving rise to an absorbing melody that reverberates and dissolves through the amorphous blue tones. Though profoundly informed by classical Chinese culture, Lalan consistently challenged pre-existing conceptual boundaries. Her understated artistic language constitutes a unique chapter in the history of modern art. 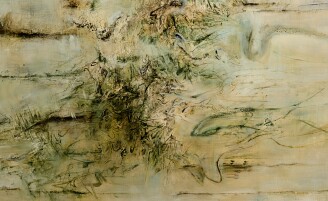