Born of Turmoil, the Daring Artistic Legacy of Georg Baselitz

Georg Baselitz was born in the year preceding the outbreak of the Second World War, and he came of age in the shadow of the War’s terrible effects. In the aftermath of such devastation German artists grappled deeply with both national and artistic identity, as well as the repercussions of those identities. From such interrogations emerged a period of intense experimentation by German artists—not least of all by Baselitz himself. The canon, as it were, became subjective, even malleable as artists challenged long-held beliefs about art's meaning and significance. As Baselitz himself observed of his early milieu, “I was born into a destroyed order, a destroyed landscape, a destroyed people, a destroyed society. And I didn’t want to reestablish an order: I had seen enough of so-called order.” From this context, Baselitz established an artistic approach that has fiercely defied expectation and forged a foundation from which subsequent generations of artists have consistently drawn inspiration.

The 1966 painting Der Jäger (The Hunter) is a singular example of both Baselitz’s tumultuous worldview and his painterly virtuosity. With the canvas divided into four distinct segments, Baselitz depicts a triumphant hunter (a common theme in his oeuvre), with classical indicators of a hunt: dog, horse, and, implicit in the ruddy hues throughout the canvas, blood. Despite oblique inferences to a traditional motif, the point of view is inherently idiosyncratic. The image is fractured, both compositionally and thematically, as the scene's four vignettes (although clearly of the same subject) fail to visually align. Rather Baselitz illustrates the scene from distinct vantages to construct a new, complex perspective. In this way the painting reads in a manner akin the way the eye sees – moving from one detailed perspective to the next, rather than observing the entirety of a subject as a whole.

Der Jäger (The Hunter) can be seen as both indicative of and foundational for the Neo-Expressionist movement, of which Baselitz is considered a leading pioneer. The evocative work takes elements from both traditional artistic modes and German Expressionist antecedents to create a wholly unique style. Where Der Jäger (The Hunter) in many regards epitomizes his early efforts to reconcile the known and the experimental, his later work Trinker am Tisch (Drinker at Table) demonstrates the creative finesse he developed after many years of technical experimentation with his medium.

Like his earlier work, Trinker am Tisch (Drinker at Table) has a divided canvas, however, in this instance, it is not nearly as rigid in its divisions, and the boundaries have been incorporated into the subject matter. A somewhat haphazard linear boundary, produced by the presence of a tabletop, separates the top third of the canvas from the rest, creating an initial impression that there are two distinct parts of the composition—similar to his technique in Der Jäger (The Hunter). The effect is heightened by the opposing color schemes of the top and bottom; the upside-down depiction of the individual sitting at a table; and the fact that the crossed legs of the sitter point to the left of the canvas, while the head below turns decidedly towards the right. Though the technique and approach differs from Baselitz’s earlier works, the inversion of subject and discombobulating vantage through compositional technique harken to his initial resistance and direct antagonism towards canonical painting methods.

Born from the devastation of the Second World War and the ensuing necessity to rebuild, the innovations of Baselitz’s art within the Neo-Expressionist movement offered a form of artistic response, even solution, to a time of cultural confusion and questioning. Together, Der Jäger (The Hunter) and Trinker am Tisch (Drinker at Table) illustrate key touchstones in Baselitz’s creative enterprise. 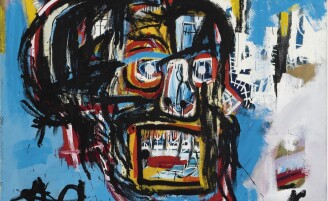 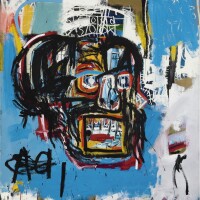 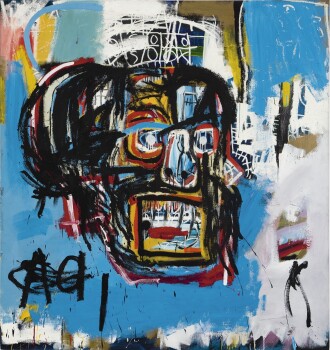