B éla Bartók is recognised as one of the most important composers and ethnomusicologists of the 20th century, considered the greatest figure in Hungarian music and one of the leading composers of the first half of the twentieth century. He immersed himself in folk music, collecting material from Hungary, Romania, Slovakia, Serbia and beyond, but his efforts to bring the natural rhythms and character of traditional Hungarian folk music into the world of Classical music were considered by many to be an assault upon the Western tradition, and were met with fierce criticism. For Bartok, his attempt was to capture a dying native musical culture and use it to inform a new kind of creativity.

BÉLA BARTÓK AT THE PIANO, WITH THE VIOLINIST ZOLTÁN SZÉKELY IN C.1925. © THE SZÉKELY COLLECTION.

Bartok's "Second rhapsody" reveals two important characteristics of Bartók: the stylistic influence of Romanian folk music, on which he did much ethnomusicological field-work, and his habitual tendency to revise the endings of many of his works and to publish both alternatives (for example, Duke Bluebeard's Castle, The Miraculous Mandarin, Violin Concerto no.2, the Concerto for Orchestra and others).

Both traits are seen here most clearly in the second movement: "It is probably the boldest of the four movements in the rhapsodies.  For it, Bartók selected seven dances played by gypsy fiddlers in Transylvania, mostly longer dances improvised in an open form using a few motives, in a wild virtuoso style that in its full rhythmic and ornamental richness, as recorded and transcribed by Bartók, could not fit into the framework of a regular concert piece" (The rhapsody's two-part form draws on a tradition in Hungarian dance, to begin with a slow pace (lassú) and graduate into a fast pace (friss).

Bartók sent this manuscript to Székely in Nijmegen in 1928, so that he could incorporate the violinist's advice on difficult passages and performance markings. László Somfai describes it as the "autograph final copy", of which Bartok retained a photocopy, annotating it for the first edition, in 1929. It was for Székely that Bartók also wrote the Violin Concerto of 1938-1939.

BÉLA BARTÓK AT THE PIANO, WITH THE VIOLINIST ZOLTÁN SZÉKELY IN C.1925. © THE SZÉKELY COLLECTION.

This manuscript shows numerous revisions of its original forty-eight bar ending. These revisions are further altered in current editions, because the composer revised the ending once again in 1935 (only published in 1947).  Somfai describes that third ending, the one played today, as basically new music in a softer, lighter, more appealing style ("We can indeed question whether it is a genuine improvement or just an alternative in a more popular style for the solution of a compositional dilemma"). The 1935 revision was apparently devised by Bartók to distinguish the Rhapsody from the Violin Sonata, which he often performed in the same concerts.

Nearly all Bartók’s autograph manuscripts are in institutions, and this is one of very few still in private hands.  It seems that the only manuscripts that escaped disappearing into archives are those that Bartók sent to particular performers, particularly violinists, as in this case.  A four-page fragment of the First String Quartet, sold here in 2012 had been sent by Bartók to Steffi Geyer, a violinist he was hopelessly in love with.  In 1967, Sotheby's sold the Bartók papers of Adila Arányi, including arrangements from Strauss's Don Quixote and pieces for violin duo and for violin and piano BB 26a & 26b, written on postcards that the composer sent to her in November 1902 (our sale on 15 & 16 May 1967, lots 385-414). 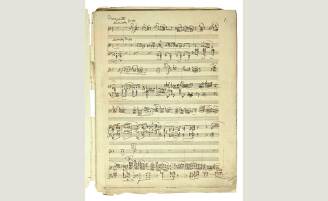