Bacon and Auerbach's Intimate Take on the Painted Figure

F ollowing the Second World War, the British art scene exploded with new ideas, styles, subjects, mediums, and – of course – artists. Of the crop, Francis Bacon and Frank Auerbach emerged as preeminent leaders. Though separated by age, nationality, and social class, these artists shared surprisingly similar philosophical and technical approaches to painting. To this day, works by these post-war British painters continue to collapse, expand, and otherwise redefine the boundary between figuration and abstraction.

The elder of the two artists, Bacon was born just after the turn of the century to a family of considerable wealth and social standing. Bacon’s mother was heir to a steel and coal mine fortune, while his father was a descendant of Sir Francis Bacon's brother, Sir Nicholas Bacon. But while Bacon's childhood may read as posh, his coming-of-age story is interwoven with trauma. Bacon's family, especially his father, disapproved of his effeminate manner – in some instances, this resulted in physical abuse1. So as a teenager, Bacon left home, choosing to hop back-and-forth between London and Berlin and living in near poverty (but surviving, thanks to financial help from his mother, stints in domestic work, and income from his job as a gentlemen’s escort2).

Bacon’s artistic career began in the early 1930s, though it took another decade for his paintings to capture notable attention. Over time, the artist developed an iconic style that draws on cubist, surrealist, and abstractionist influences. He captures subjects with distorted, geometric lines, creating a three-dimensional effect that contrasts exceptionally with flat, two-dimensional backgrounds. The result is wonderfully dynamic layers of imagery and symbolism capable of captivating viewers with emotional depth. As author John Russell notes:

Bacon wrenched, reversed, abbreviated, jellified and generally reinvented the human image. The paint-structure was by turns brusque and sumptuous, lyrical and offhand, pulpy and marmoreal. Swerving, pouncing, colliding with itself, taking for granted the most bizarre conjunctions of impulse, it produced a multiple imagery which was quite new in painting.

The present work, Study for Portrait, is a touchstone for this technique, a shining testament of an artist at the peak of his career. George Dyer, Bacon’s longtime lover and muse, is the sitter. While Dyer appears in many of Bacon’s works, this is the last painting Bacon completed of Dyer before the latter's suicide. In the work, Dyer leans forward in a chair towards the viewer; his pose is attentive, but it's impossible to tell where the subject's focus lies, as smudges obscure his face from the viewer's gaze. Dyer is both nude and solitary – combined with the velvetly black background, the overall effect is one of loneliness and fragility. Study for Portrait drips with equal parts melancholy and cerebral tenderness, inviting the viewer to experience the vivid depths of Bacon and Dyer’s relationship.

Although considered by many to be the greatest British artist of the 20th century, perfection eluded Bacon. The artist was famous for incessantly reworking his paintings, often destroying the pieces entirely. Study for Portrait was revised numerous times, even after Bacon showed the piece at galleries. Luckily, the canvas survived Bacon’s decimation – and to this day, remains a fundamental pillar of the artist’s canon. 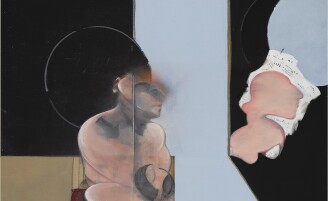 Auerbach, like Bacon, experienced a difficult childhood – though for entirely different reasons. Auerbach was born in 1931 Berlin to a middle-class Jewish family. In 1939, his parents arranged for him to leave Germany for England, escaping Nazi rule. In the coming years, both Auerbach’s parents were sent to concentration camps – neither survived the war.

An orphan in England, Auerbach threw himself into artistic pursuits – first the theater, then the canvas. He received a formal education courtesy of the St. Martin’s School of Art, the Royal College of Art, and London’s Borough Polytechnic. Along the way, Auerbach supported himself by teaching art to students at academies and preparatory schools across Great Britain.

Auerbach’s artistic talent first garnered attention in the later 1950s, though, like Bacon, it took several decades for Auerbach to perfect his style and grow a following. What emerged is a style born out of opposition: While Auerbach remains intent on capturing his sitter's bare, foundational essence, he does so by relying on an overwhelming quantity of paint. As noted by critic Ben Lewis, Auerbach’s thick, butter-like brush strokes often take four months to dry4.

Like Bacon, Auerbach is known to rework his paintings countless times. “Auerbach paints a portrait with six months of weekly sittings, often scraping away the work of the day before and starting again,” writes Lewis (Ben Lewis, "Exuberant unpredictability," The Telegraph, 2006.)

But perhaps the labor of a journey is a measure of the genius – for Head of Julia vibrates with character and emotion. The sitter for the piece is Julia Wolstenhome, Auerbach’s wife. In this piece, Julia’s essence is indeed tangible between the layers of paint; her profile takes shape in abstract streaks of green, daubs of yellow, and notes of red. What results is an intimate view of the relationship between the artist and the sitter – an experience that connects Auerbach’s talent undeniably to Bacon’s.

“Auerbach paints a portrait with six months of weekly sittings, often scraping away the work of the day before and starting again.”

Both Study for Portrait and The Head of Julia offer the viewer intimate glimpses at the obsessive relationship between artist and sitter, master and muse – though executed in entirely different ways, from two very painters. These works come to Sotheby's from The Gerald L. Lennard Foundation Collection; Mr. Lennard was particularly drawn to Post-War British painters who explored the limits of portraiture in the years following World War II.