At Home with John Richardson

BY James Reginato
The late Sir John Richardson mixed with the great artists and collectors of the 20th-century. James Reginato considers his life through the lens of the fabulous homes he lived in.

A house invariably presents a reflection of its occupant. What if a person could recapture and put on exhibit all the houses he’d ever lived in? What a tale that would tell. That is what John Richardson did in eight strikingly illustrated chapters in Rizzoli’s John Richardson: At Home (released March 2019, before the author’s death) – beginning with one devoted to the house where he was born in 1924. Grange Mount was a spacious red-brick villa on the outskirts of London that included an enormous glass winter garden aflutter with exotic birds and a monkey called Jacko.

“So, it takes the form of a biography, yes,” Richardson observed to me about this volume during a chat in his astonishing loft on lower Fifth Avenue in Manhattan. He lived there from 1995, and it is the subject of the last chapter. Sir John Richardson, KBE, FBA, as we should properly call him, was knighted by Queen Elizabeth II at Buckingham Palace in 2012. Her Majesty was rather astounded when he told her that his father had been knighted by Edward VII. “But he was my great-grandfather. Amazing,” she told Richardson as she touched his shoulder with her sword. “It’s over 100 years ago.”

Sir Wodehouse Richardson, a distinguished quartermaster general in the British Army, fought in the Boer War and other conflicts on behalf of Queen Victoria before fathering John at the advanced age of 70. The younger Richardson thus remained a living product of the Victorian era, though nothing about him was inhibited or constrained.

Richardson always found himself in extraordinary habitats, but it was sometimes difficult to decide if the man made the house or the house made the man. “The houses I’ve lived in have all influenced me, though obviously in different ways,” he said. “But then, when I find a space, I want to improve it and change it into my way – my way of thinking.”

“That was where I became an adult, a figure in the art world, a friend of Picasso’s and Braque’s”

Clearly, his adolescent years at Stowe School, where he arrived in 1937 at age 13, left their mark. The youngest and least traditional of England’s public schools, Stowe occupies one of the country’s most magnificent stately houses, set in a spectacular park decorated with temples, grottos, and other follies. “Everyday exposure to Vanbrugh’s and Adam’s facades and Capability Brown’s landscaping engendered a taste for classical architecture, which developed into a passion,” Richardson wrote in John Richardson: At Home.

This academic idyll was interrupted by the Second World War. On holiday in France at the outbreak of the conflict, John – with his mother and two younger siblings – found temporary refuge on the Isle of Jersey (one of the Channel Islands). While there, John and his family came to know a sophisticated and stylish couple (an aristocratic Russian pianist and his rich American wife). To young John, the couple’s house was revelatory. “It was my first glimmering of something glamorous, something new,” he recalled. The Richardson family soon returned to Great Britain and stayed at a house in the country – with John returning to London before going to the Slade School of Fine Art at Oxford, where it was relocated from London during the war.

In the postwar years, Richardson worked as an industrial designer and, occasionally, as an art and literary critic. In the ensuing decades (1958–1980), he kept a domicile in London, having been fortunate enough to land a coveted lease on an apartment in Albany, a former royal mansion on Piccadilly that was turned into the city’s first flats at the dawn of the 19th century. With its alluring mix of Georgian and Regency architecture, Albany provided a perfect environment for Richardson to hone his style, tastes, and social life. “I attended Richardson’s spirited gatherings, where the scholarly and high-minded collided with wilder, more exuberant friends in rooms filled with Picassos, Pre-Raphaelites and Roman busts,” wrote friend and antiquaire Christopher Gibbs.

Richardson’s most formative decade was the 1950s, which he spent largely in France, at the collonaded Château de Castille, with Douglas Cooper, an English art collector 13 years his senior who was wealthy, brilliant, and obstreperous. “Without question the château was the most important house in my life,” Richardson said. “That was where I became an adult, a figure in the art world, a friend of Picasso’s and Braque’s… and all this thanks to Douglas Cooper, who had the most important collection of Cubist art anywhere in the world.”

In 1999 Richardson published a vivid memoir of this period, The Sorcerer’s Apprentice: Picasso, Provence, and Douglas Cooper. But the autobiography ended abruptly in 1960 – certainly leaving many readers full of curiosity about what happened next in the author’s life.

“It wasn’t a very large château. Life with Douglas… became claustrophobic,” he told me. “I came to New York to escape him; my life continued over here.” 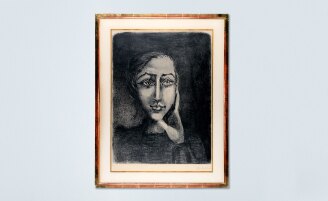 “Over here” unspooled initially in two floors of a pink brownstone on East 75th Street, where he lived from 1961 to 1995. During these years, he successively opened the first New York office of Christie’s, served as gallery director of M Knoedler & Co, and, most crucially, began writing his masterful multivolume biography of Picasso.

On East 75th Street, Richardson encountered high-ceilinged rooms exuding “seedy stylishness”, as well as, early on, a flood and a fire, all of which “obliged me to find a way of transforming my disparate chattels – good, bad, and indifferent, from all civilisations and periods – into a coherent ensemble”.

“It’s an instinctive process beyond my control,” he said. “I mix things, and they galvanise each other.”

In 1975 Richardson acquired a boathouse-like country house in the rolling hills of northwest Connecticut. A bit later, after he vacated Albany, a container of furniture from those rooms arrived, filling his current needs perfectly. “Most of [the furniture] looked as if it had seen better days, and indeed it had – just the thing to give the new look of the house a touch of badly needed patina.”

In the early 1990s, he built a one-room pavilion modelled after Karl Friedrich Schinkel’s villa in Berlin. Meant to be a place for Richardson to write, it proved so ideal he made it his main Connecticut residence, with the former house accommodating visiting guests. But in 2018 he felt it was time to pull up stakes, and he put the Arcadian acreage up for sale.

Some of the furnishings were repurposed in the Fifth Avenue loft. He had moved there more than two decades earlier, but the vastness of the space, and Richardson’s ever-percolating creativity, ensured that there was always room for pretty arrivals. (Richardson’s migration downtown was driven by several factors, but chief among them, he recalls, was the adjacency of East 75th Street to Mortimer’s, the society boîte of the era; the constant socialising there was seriously impeding his literary output.)

His most recent work-in-progress was a large room at the end of the L-shaped floor, an area he called the studio, where he did his writing (volume four of the Picasso biography was nearing completion).

Did gathering the materials for this book – so many long-unseen images – trigger memories and emotions? “Oh, God, yes,” said the author.

But Sir John believed he exercised restraint in his texts. “I think I’ve been reasonably discreet – what people want to read about is pretty houses, not nasty quarrels.”

Aside from Fifth Avenue, the others vanished from his world. “They’re in a sort of memory department, which I don’t open the locked door to very often,” he said. “But I can. When I do, I think – well, that wasn’t too bad, or, Christ, did I really do that?”

James Reginato is writer-at-large at Vanity Fair and author of Great Houses, Modern Aristocrats (Rizzoli)
A version of this piece appears as the introduction to John Richardson: At Home, also published by Rizzoli