Ask Roxane: What is the Difference Between Craft and Design?

I am often confused about the differences between craft and design. How do you set them apart?

Many people wonder about the difference between art, design and craft, and the short answer is that there isn’t always a clear-cut difference. We often see these areas blurred, and to add to the complication, over the past few years the fashion industry has come into the fray and increasingly incorporates art and design. Today on any given catwalk, you are likely to see ‘wearable art’ or a piece of ingenious design.

There are of course a few stand-out elements in each of these disciplines. For example, craft has historically been linked with ‘handicrafts’ so there is the hand of the maker and human input. It is something people have done for hundreds of years. Potters and ceramicists, weavers, carvers, glassblowers, and so on, all conjure up the image of a painstakingly-produced item, which often reflects the personality of the maker.

Design on the other hand adheres to certain aesthetic principles and is something that has only really emerged since the beginning of the 20th century. It is an ‘applied’ art form, meaning that it implies separation from the manufacturing process. Products have to be designed before they move to the production line. There are all kinds of design categories: furniture, landscape, industrial, graphic, interior and so on.

A design product is often serially produced while a piece of craft, produced by a master craftsman, is a one-off. That said, the glorious Meiji vases produced in nineteenth century Japan were almost mass-produced for industrial fairs in France. The winner of the 2016 PAD Design Fair can only be described as a craftsman creating extraordinary works out of sea shells. The boundaries are regularly blurred! For that reason I find it simplest not to dwell too much on the distinctions and just enjoy the results!

Read more from Roxane at Harper’s Bazaar Arabia including:
- There is much debate about equal pay. How can I make sure I’m not discriminated against in the work place? 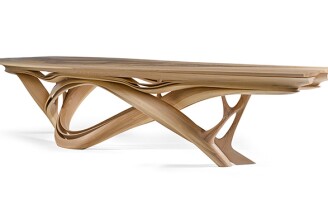