By Sotheby's
As a number of works by artists from Arte Povera school are offered for sale in Contemporary Art Online| Milan , we look back at the origins of the movement and the ideas that challenged the art establishment.

1. Arte Povera translates as 'Poor Art' and was a movement founded in Italy in the late 1960s by artists such as Alighieri Boetti, Franceso Lo Savio, Giuseppe Penone, Luciano Fabro and Michelangelo Pistoletto. The term was coined by Germano Celant, an art critic and historian who first recognised the activities of this politically-minded group. Celant identified a shift in the way these artists approached materials, the studio and the conventional gallery system.

2. The movement sought to challenge the perception of the 'grand' work of art as a revered object, and instead made use of everyday and found materials such as paper and ball-point pens, earth, branches, rocks and cloth. Through a partial rejection of the conventional 'fine art' materials like oil paint, marble and precious metals, the participants questioned the role of the artist in reflecting the social and economic challenges in post-war Italy. 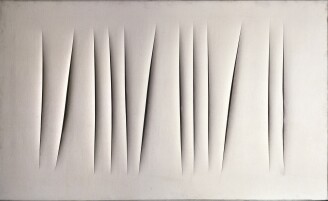 3. Germano Celant held an exhibition called Im Spazio (The Space of Thoughts) at Galleria La Bertesca in Genoa in 1967. This event widely considered to be the birth of the Arte Povera movement. Included in the exhibition was Luciano Fabro, Jannis Kounellis, Alighiero Boetti and Pino Pascali — and their anti-establishment approach to materials and techniques were the catalyst for Celant’s theory. Germano Celant now holds the position of Senior Curator at the Guggenheim museum, and Director of Fondazione Prada.

4. Although active for a relatively short period of time under the umbrella of Arte Povera, many of these artists went on to influence many later movements and schools within contemporary art. The Mono-Ha group founded by Lee Ufan and Nobuo Sekine followed similar doctrine: making work that was about the innate properties of the materials themselves, rather than using the materials to represent something else. 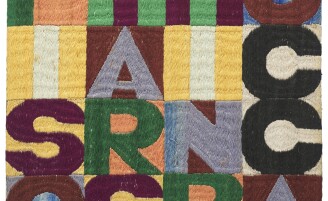 5. There was no Manifesto drawn up for Arte Povera. One of the key factors of the movement was a rejection of rules and the pre-existing structures more rigidly adhered to by their European predecessors such as the Futurists, Surrealists and Constructivists, who all committed their creative philosophies to paper in a published manifesto.

6. Many of the artists who played a key role in the movement are still active today. A retrospective of works by Marisa Merz is currently on display at Serralves Museum of Contemporary Art in Porto, and Giuseppe Penone has recently been commissioned to create a site-specific work at the Louvre Abu Dhabi, due to be unveiled in 2018.

7. A number of imporant works from the Arte Povera movement have been sold at Sotheby's in recent years, and Alighiero Boetti's Pisciarsi In Bocca is offered in Contemporary Art Online|Milan until 24 June. Other recent highlights include an iron sculpture by Franceso Lo Savio will sit alongside two mirror paintings by Michelangelo Pistoletto, a richly textured tapestry and a large-scale triptych drawing, Incontri e scontri by Alighiero Boetti – bearing his trademark themes of patterned grids, letters and punctuation marks, meticulously rendered in ball-point pen.