By Sotheby's
The 1990s marked a significant shift in Euro-American political and cultural history, not least catalysed by the fall of the Berlin Wall in November 1989, the dissolution of the Warsaw Pact, the rise of New Labour in the U.K., the Gulf War, the Clinton-Lewinsky scandal and the dot-com bubble. Art, music and theory underwent a dramatic shift over the course of the decade, and this quiet revolution is none better demonstrated than through the poignant works of artists included in April’s upcoming Contemporary Art Online sale.

I t would be hard to talk about the 1990s in contemporary art without mention of the Y.B.A.’s – the Young British Artist’s – who launched themselves to the heights of stardom in the years after the watershed exhibition Freeze in 1989, curated by Damien Hirst. A close friend of Hirst, Angus Fairhurst was a chief member of the Y.B.A. group who graduated from Goldsmiths art college in the late 1980s, alongside Sarah Lucas, Ian Davenport and Gillian Wearing, in addition to the likes of Tracey Emin, Chris Ofili and Jenny Saville. Fairhurst, who died in 2008, was a linchpin artist of the British troupe, and the selection of works on view – alongside his former colleague Hirst – in the Contemporary Online sale are exemplary studies from his early oeuvre.

The 1990s were undoubtedly characterised by the burgeoning interconnectedness and social libertarianism that was flourishing through music and art, across German techno, American house and British rave culture, through ever-quickening modes of communication. It is in this environment of increasing speeds that Francis Alÿs emerged as one of the key figureheads of the ‘rootless’ artist, for whose practice is epitomised by a constant movement and focus on changing surroundings, fluid style and sense of impermanence. His Elephant (1992) work illustrates the changeability that is so central to his practice, echoing his works by Mexican sign-painters that hand over authorial license to other craftsmen; shattering the notion of an aura in the single, unique work of art.

This newfound artistic mobility and freedom was established by acclaimed writer and curator Nicolas Bourriaud, whose seminal texts Relational Aesthetics (1998) and The Radicant (2009) were the first acknowledged the ‘placelessness’ of the new forms of contemporary art in the 1990s, through the works of Alÿs and Rikrit Tiravanija and Gabriel Orozco.

Hiroshi Sugimoto’s Hall of Thirty-Three Bays (1995) similarly implements ‘place’ as a principle theme of this mammoth artwork, each photograph capturing a Kyoto temple which is home to a thousand-and-one Senju Kanon; the “Thousand-Armed Merciful Bodhisattva Avalokitesvara” figures. In this instance, Sugimoto ponders the longevity of contemporary, conceptual art, using the eight-hundred-year-old statues to consider the future of art in an intangible world.

But many artists of the 1990s embraced their mediums with a revived impetuosity. Not least in the works of Raymond Pettibon – Untitled (That he may not keep under by just setting his teeth and holding on?) (1990) and Untitled (Giant Jimmy Olsen) (1999) – whose tongue-in-cheek, almost sardonic wit, that plays out in an illustrative, painterly, comic-book style has become his signature. Similarly, in Callum Innes’ Exposed Painting, Titanium White CI/C/583 (1996) and the works of Katharina Grosse, painting achieves a hyperbole of form that takes the Modernist cues of monochrome and colour field painting to their logical end point.

This dynamic, changing tide that ‘maximised’ medium and took the artist out of the studio is what makes the 1990s such a wonderfully rich cultural moment. Perhaps too close in recent history to yet see the value of the pre-millennial aesthetic, the works on view in the Contemporary Art Online sale this April reveal an untapped well of artistic talent. 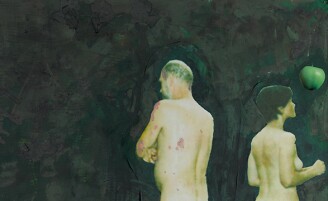